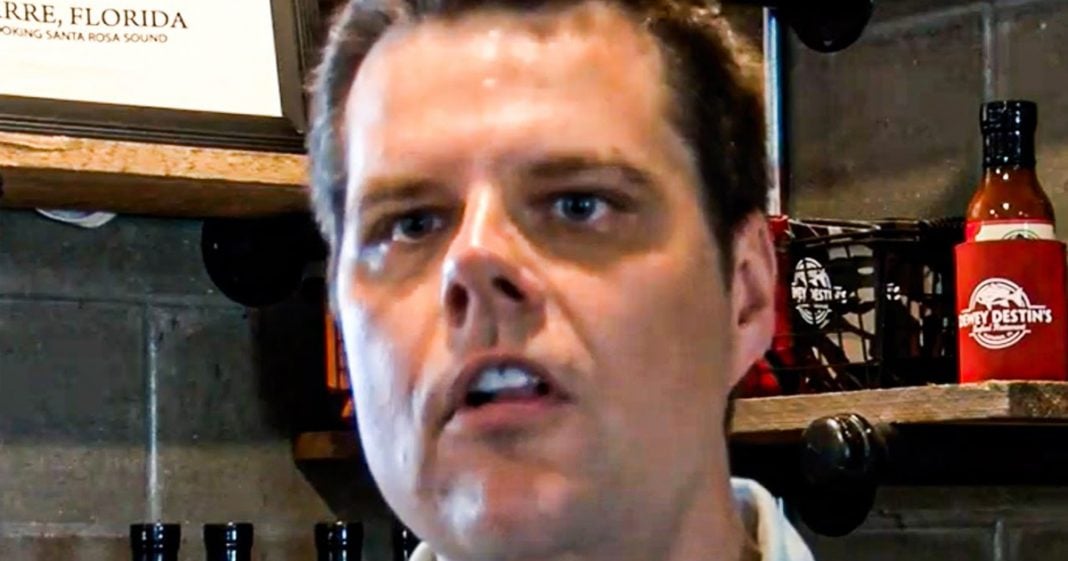 CNN has spoken with two women who allegedly attended parties that Republican Representative Matt Gaetz was present at, and they claim to have witnessed extensive drug use, sex, and plenty of payments to women. These new allegations coincide with new reports that Gaetz was forced to surrender his iPhone back in December after his friend began cooperating with the federal authorities. Things are looking worse for Gaetz by the day, as Ring of Fire’s Farron Cousins explains.

According to a startling new report from CNN, two women claim to have been present at parties where Matt Gaetz was also present where they witnessed Gaetz taking drugs. They said there was a lot of sex and of course that money was changing hands, payments they said were being made. So they say they personally witnessed Matt Gaetz having, uh, taking drugs. Did not necessarily personally witness him engaging in sex, but he was also according to these women, not the only politician at these parties that would typically occur after some kind of event. A lot of times they would show up in formal wear, they had been somewhere, real sketchy stuff here with regards to the behavior being alleged to have taken place. Now these two women remained anonymous. Um, and that of course is the thing that Matt Gaetz’s camp is attacking them for like, well, they’re anonymous.

So we can’t believe this. However, this is the fun part of the story. Um, they say that the reason they’re coming forward is not because they’re trying to take Matt Gaetz down, but because they’re trying to, trying to help him because they say that at these particular parties, there were no underage women. So of course Matt Gaetz, can’t be, can’t be in bed essentially with a, a trafficker. No, he wasn’t having sex with underage girls, just women over the age of 18, they say. So, um, that’s not exactly the vindication that they may think they’re giving him because they also did say that, you know, payments were being made for sex, still a crime. Um, it shouldn’t be, let’s be honest, but it technically is. So yes, that is a problem. Either way, that’s probably one of the least of Matt Gaetz concerns right now.

Obviously we also know that he had to surrender his iPhone and his girlfriend had to surrender hers back in December. I think it actually was an ex-girlfriend that had to surrender hers. We know that his pal, Joel Greenberg, is and has been cooperating with the feds for months at this point. Um, yeah, the guy’s in a lot of trouble. And as I keep saying, like every day or so at this point, a new story comes out showing even more disgusting behavior from Matt Gaetz. Like he has no defense left, especially now that we know he was forced to surrender his phone back in December. So he has known how deep this investigation is for months. And yet, since it’s only been out for about two weeks, he’s been playing dumb, acting like, no, this is a broadside. I am not guilty of any of this.

This is ridiculous. It’s a witch hunt. Eh, it’s a witch hunt that started under your good buddy, Donald Trump’s department of justice. You’ve known about it for many, many months now. You have had to surrender potential evidence in this investigation. This isn’t a witch hunt. This is your career imploding right before everybody’s eyes. It’s getting harder and harder for him to try to deny any of these allegations when we have all these new revelations coming out on a regular basis. The two women that spoke to CNN, by the way, also described him as like a frat boy party type, which is probably the least surprising thing that we have learned about Matt Gaetz in the last four years. That, that kind of fits him to a T. He has the look. He has the personality, the attitude of it. An overprivileged frat boy white kid, whose daddy has been able to get him out of trouble since the day he was born.

Well, that’s not the case anymore. And Gaetz is quickly finding out who his real friends are in DC and beyond and unfortunately for him, Donald Trump is not on that list either. As we talked about earlier this week, Trump allegedly would not meet with Matt Gaetz recently because his staffers told him to keep his distance. Don’t associate with this guy. So yeah, things are falling apart very quickly for Matt Gaetz. And again, with the rate at which new information is coming out, God only knows what kind of horrifying stories going to be coming out within the next 24 to 48 hours. But given the cycle we’ve had so far, it’s pretty much a safe bet that something else is going to break in the next day or two.