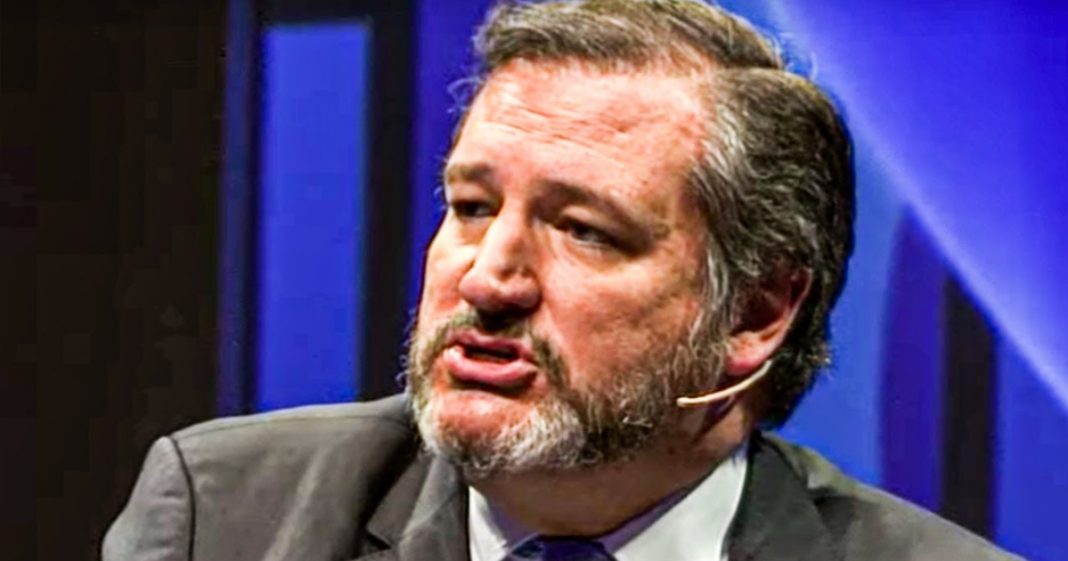 Republican Senator Ted Cruz is going all in attacking so-called “woke” corporations, and he is making this the central theme of whatever future political campaign he may be running. The only problem is that culture war issues are not sustainable, and his fights are going to cause far more harm to his campaign than they are likely to help it. Ring of Fire’s Farron Cousins explains how Cruz could eventually go down in flames as he continues to attack corporations for finally doing the right thing.

Republican Senator Ted Cruz is betting his entire political future on these idiotic culture wars that he keeps trying to keep alive. So what’s happening right now is that Ted Cruz has joined forces with a Republican Senator Josh Hawley, who also is speculated to be a contender for the 2024 GOP nomination. They’ve teamed up to take down major league baseball because they think major league baseball is too woke. And so they want to take away the antitrust immunity that major league baseball has because major league baseball made the mistake of pulling the all-star game out of the state of Georgia in response to Georgia’s suppressive voting laws. So in Ted Cruz’s mind, attacking this corporation and of course countless others, is absolutely the hill upon which he is willing to die. And that’s one of the dumbest things I’ve ever heard in politics. Here’s the problem with Ted Cruz’s little theory.

And by the way, it’s not just with the antitrust immunity for major league baseball. He has been going after corporations for the last week or so on his Twitter feed, absolutely attacking them at every given opportunity. Claiming the GOP is the party of the working class, blah, blah, blah, blah, blah, nonsense. You’re going to lose this one, Ted. This was a stupid fight to pick because it’s a fight that you can’t win because there are no winners in this fight. Ted Cruz wants to emerge as the figurehead of the Republican party. He wants to win over as many voters as possible. And he’s trying to do that with Trump’s base with his little border stunts. And now he’s trying to do it with working class people that have been held down by corporate masters for too long and that is the truth, by the way. But he thinks that he can somehow hoodwink people into thinking that the last 40 plus years of Republican policies didn’t actually exist.

And that’s why he’s going to lose. Not to mention the fact that, of course, if he were ever called out on this on a debate stage, all the person attacking Ted Cruz would have to do is point out all of his corporate donations. You know, even before all this fight began, Ted Cruz loved to talk about big tech and how horrible they are. He’s getting tens of thousands of dollars from big tech, right? His own receipts show how deeply embedded he is with these corporations. So he really doesn’t have a leg to stand on with any of this. But this is a particularly stupid hill to die on, not just because the attacks on corporations could result in him getting less corporate money, but because they’re actually doing the right thing for once. What these companies are doing is speaking out against voter suppression, Republican voter suppression. And that’s a good thing. We, we actually want them to do that.

So when they come out and they say, we do not support this, what they’re doing is exposing the Republican party’s plan. And then when you see Republicans retaliate against them, abuse their power essentially to retaliate against these companies, it makes the public think, well hold the hell up. They said they, they don’t want people to be, not allowed to vote and so you do all this horrible stuff that, like, they’re right. The more people look at this situation and look at the two sides fighting here, they start to realize that the Republicans are on the wrong side. And the corporations, again for once, are on the right side. And that’s not going to end well for Ted Cruz, but let’s suppose for a second, it did. Let’s say Ted Cruz’s strategy pays off and he wins. He attacks the corporations and they back down.

Cool. That’s going to last about a year, maybe, maybe if he can milk it a year. And then after that, the public is going to move on and forget. So if he tries to run on that in 2024, people are going to say, what, what, what, oh, that thing. Yeah. I forgot about that. That was, what, what happened exactly again? People won’t remember. You know, after 17 years of doing this, the one constant in politics that I can promise you exists is that people forget. People, forget the worst things. People forget the best things. But people forget. So Ted Cruz picking this fight right now, it can only serve to either hurt him in the long run or do absolutely nothing for him. Somebody who’s been in politics as long as Ted Cruz has, should be able to know that, right? You’d think. Or has he become so blinded by his ambition that he’s not able to think clearly anymore?