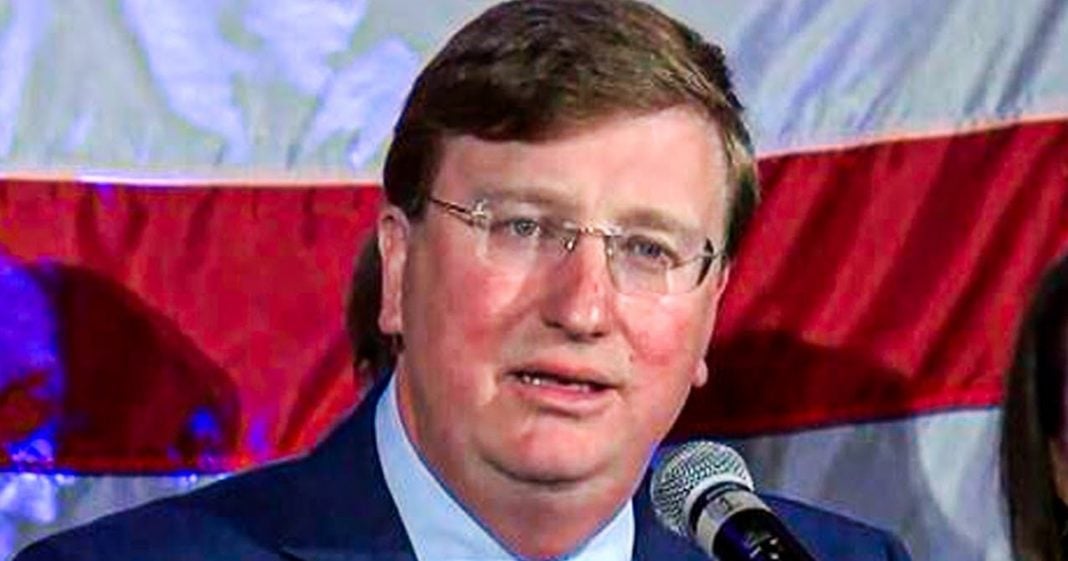 Republican governor Tate Reeves of Mississippi quietly signed an order earlier this month declaring April to be “Confederate History Month.” This order is nothing short of racism, as people like Reeves attempt to rewrite the history of the Civil War and claim that “both sides” did some pretty bad things. Republicans have been trying for quite some time to repaint the South’s actions as anything other than protecting their desire to own slaves, and Ring of Fire’s Farron Cousins explains why this order is just the latest disgusting action in that long tradition of historical rewrites.

You know, you gotta hand it to Republicans in the South, right? Most Republicans throughout the country like to try to hide their racism, try to mask it, you know, downplay it a little bit, fancy it up with clever talking points. But down here in the South, nah, they don’t care. And Mississippi’s Republican governor Tate Reeves proved that actually earlier this month, of course he did it in secret because he didn’t want anybody to know, but he signed an order declaring the month of April Confederate history and heritage month. Confederate heritage and history month, April. So right now is Confederate heritage and history month in the state of Mississippi. Now here’s the thing. I’m going to go ahead and give you a little bit of history on the Confederacy, right. That thing that existed for literally four years, four years out of America’s entire history, four years is how long the Confederacy lasted.

That flag that you see waving on pickup trucks all over, down here in the South, that didn’t even last four years. Okay. That flag was not in use during that entire four years. So again, Republicans want to devote an entire month to four years of their dark history. What they’re actually doing here is, is what we call historical rewrite because that’s what they want to do. Because according to this order, this is going to talk about the good and the bad of not just the South, but also of the North. You know, the war of Northern aggression as they still like to call it, instead of calling it the civil war. So they’re going to try to teach kids that, hey, the North was doing some pretty disgusting things. They were slaughtering our brothers and sisters down here in the South. Um, they probably want to avoid, you know, all of the, uh, racism of the civil war. The fact that they did it to protect slavery in the South.

And I know Republicans have been trying for many, many years to tell us that no, no, no. The civil war wasn’t fought over slavery you troglodyte. Who would believe that? It was about, uh, trade and commerce. Oh really? Yeah. What were they trading? What was the commerce down here in the South? Remind me of that again. But we’ve all seen them try to do this over the last few years and this is just an extension of that. They want to rewrite their ugly, disgusting history and this is the only way they know how to do it. To end up being more racist than they wanted us to know. Confederate history month is a sham. Confederates were losers. All these Confederate monuments down here in the South, those are the losers participation trophies.

It was four years of American history. It was a dark four years. It should be taught in schools, absolutely, but not as something to be proud of. It should be taught as a warning. It should be taught as a lesson in racism and how we’ve pretended to move past it, at least. This country is still very inherently racist today, but at the very least the civil war did have a positive outcome for millions of people in this country. That’s the lesson. Teach the horrors of war, teach the follies of the South and then move on. You don’t need an entire month to do it. I just did it in a little over three and a half minutes.