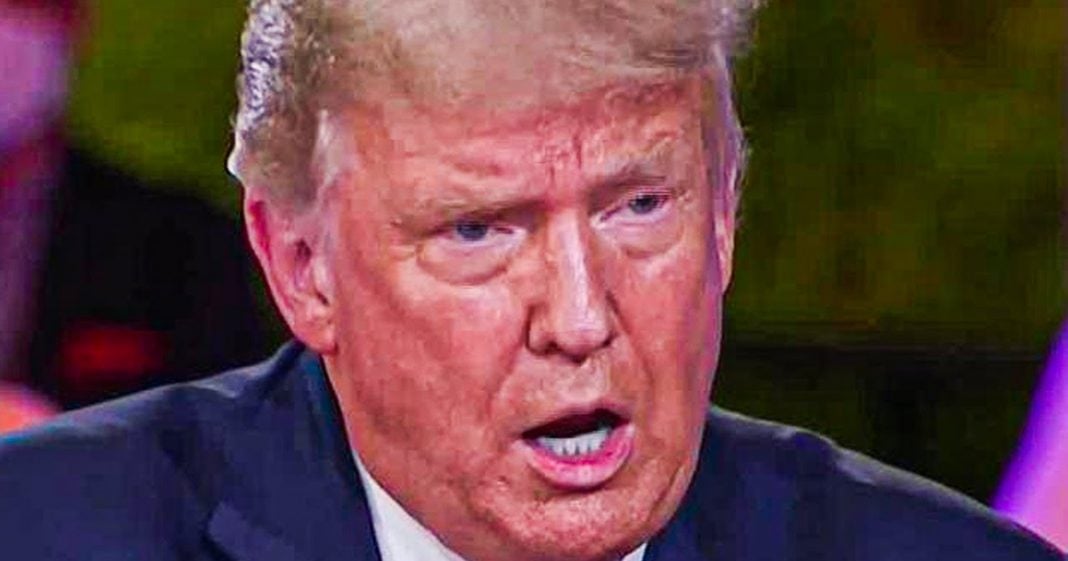 Donald Trump is still desperate to prevent Congress from getting their hands on his financial documents, including his tax returns, and he has sent his lawyers to do everything in their power to stop this from happening. The latest effort involves his lawyers arguing in New York that they cannot give his records to Congress (pursuant to a new New York law) because that law only applies to the CURRENT President, and Trump is not the President anymore. Ring of Fire’s Farron Cousins discusses the ridiculous efforts being put forth by Trump.

Donald Trump is so desperate to prevent Congress from getting their hands on his financial records, including his tax returns, that he has sent his lawyers up to New York, where they have been arguing for a couple of weeks on multiple different fronts to do whatever they can to prevent Congress from getting their hands on his tax returns. Now, last week, they were talking about the fact that, hey, the request that they made is no longer valid because you know, they requested tax returns of a president and this dudes not president. So ha ha, what you gonna to do? And so this week they’re arguing that the law that New York passed, the trust act I think it was about a year or so ago, which said New York can provide tax information about a current president to the house of representatives if they request it. They said, well, guess what?

You can’t do that because Donald Trump’s not president, ha, we caught you in a technicality. Didn’t we? Um, this is idiotic. This is absolutely idiotic. It is already well-established that Congress does have the authority to get their hands on the tax records of any individual in this country. And the only reason they weren’t able to do it during the administration is because at the time Trump’s lawyers did successfully argue that, no, because he’s president, you can’t do that. And that was able to extend it this far. But now they’re saying you can’t have it because he’s not president. So at the time you couldn’t get it because he was president, but now you can’t have it because he’s not president. So no matter what happens with the man, you just can’t have it. This legal battle is far from over. His lawyers are going to go through all of the mental gymnastics they can to prevent Congress from getting their hands on these tax returns.

But I got to wonder at this point, how bad is it? Whatever it is, Trump doesn’t want us to see how bad it is it really, because this is nuts. The fact that he is going to these links, spending so much money on legal representation, just so Congress can’t see his taxes. I’ve said before, I don’t think there’s actual criminal activity in his taxes. Most people who are doing crimes, um, typically don’t report those in their taxes. What I think it is is embarrassment, because I think Donald Trump is worth well below the figure that he has given us, which I think is what like 10 million, 10 billion, excuse me. I bet his taxes show that he’s not even a billionaire. That’s just my guess, but it’s gotta be something truly embarrassing that he feels would ruin him in the eyes of the public for him to be fighting this hard. But let’s also talk about Congress for a second because Congress, what are you going to do with them anyway, right?

Courts have already said that you can’t get them for emoluments clause violations. They’ve tossed all that. So even if you show it in the taxes, they’ve already said you can’t because you can’t really link it. So what are you going to do with them anyway? I, look, I would love for Trump to be embarrassed. I would much rather him go to jail. So why don’t we just drop it, Congress? Just drop it. It’s not worth it at this point because the actual criminal investigators have their hands on this material. And if anything is going to come from it, it’s going to come from those individuals. So let’s let them do it. Y’all drop it and move on to other more important issues because I promise you whatever Congress was going to do with his tax returns, it’s not going to make any of our lives better. It may make Trump’s worse or at least more embarrassing, but it’s not really gonna do anything for us. So I think it is time for Congress to move on. Let’s let the investigators in New York keep those documents and do what they need to do with them.