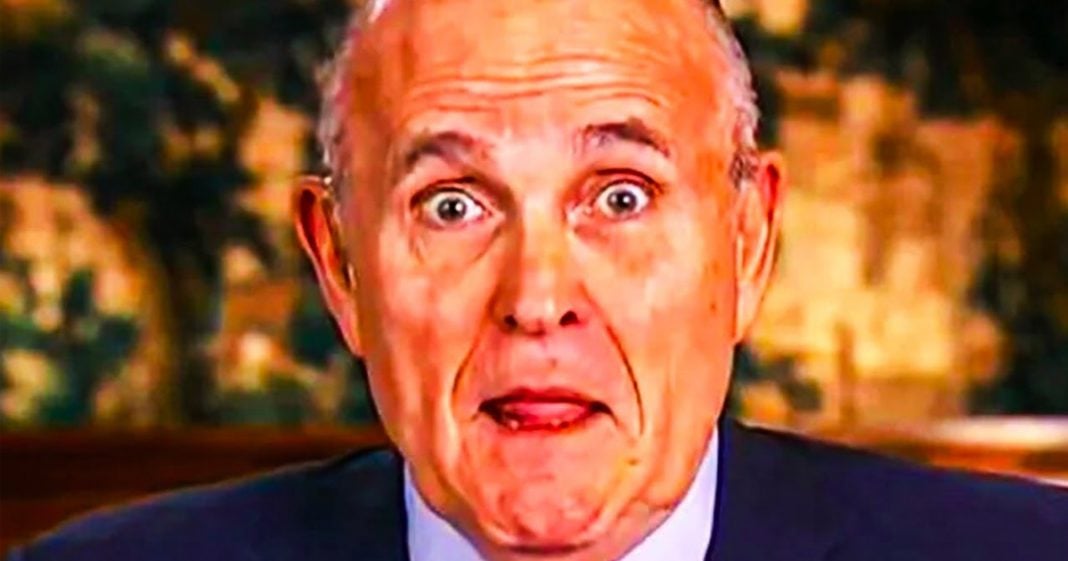 Georgia’s lieutenant governor Geoff Duncan told CNN this week that it was Rudy Giuliani’s lies about the election that ultimately led to the new voter suppression laws in Georgia. Duncan wasn’t clear on whether this was a good thing or a bad thing, but he is certain that the ideas picked up steam with the state legislature as soon as Giuliani started spreading all of his lies about the sanctity of the election. Ring of Fire’s Farron Cousins discusses this.

Georgia’s Republican Lieutenant governor Geoff Duncan actually went on CNN earlier this week, where he admitted that Rudy Giuliani’s election lies are what led to the voting suppression legislation in the state of Georgia. Here’s what he had to say. The fallout from the 10 weeks of misinformation that flew in from former president Trump, I went back over the weekend, really looked at where this really started to gain momentum in the legislature. And it was when Rudy Giuliani showed up in a couple of committee rooms and spent hours spreading misinformation and sowing doubt across, you know, hours of testimony.

So your response to Rudy Giuliani, doing what you admit is lying is to just say, screw it. We’re going to suppress all the votes. See, I can’t really tell if this guy is saying this as if it’s a bad thing, like he doesn’t support the voter suppression, or if he’s explaining in a way as such saying, listen, we got Republicans coming in here, lying all the time, saying all these bad things happen. So we said, you know what? We’re going to make it to where they can’t even make these lies up anymore. Suppress it all get rid of it all. Who cares, here it is. But we know one thing for certain at this point, Rudy Giuliani’s nonstop lies made this happen, according to the people who wanted this to happen. And this was 100% predictable because we hear at Ring of Fire, as I’m sure most of the other folks in progressive media said, we had been predicting this since before, you know, the electoral college vote.

It was obvious that Republicans would be using these fully debunked talking points to pass more legislation across the country to suppress the voting rights of their citizens. And lo and behold, that’s exactly what happened. And yes, exactly as everybody predicted again, they used the same talking points, even though they knew they weren’t accurate, even though they knew people were being sued for using those talking points for $1.3 billion a piece, they still used it. They still went out there and said, well, it’s just not safe. Voting by mail can’t be trusted. All of these people can’t be, listen, there were three separate times during the Georgia vote count where there were either audits or recounts or verifications. And during each one of those three events, no fraud was found whatsoever. None. So any justification that they use in the state of Georgia to say, we had to pass these voting laws, it’s a lie, it’s a farce. They just had what was most likely their most secure election ever.

Not only that, it was one with the highest participatory rates that we have seen, one of the higher participatory rates, excuse me, that we’ve seen in Georgia in decades. And that’s what happened. That’s why the state flipped. More people got out there to vote. Thanks in part to people like Stacey Abrams. The people were energized. The people wanted change and the people voted for change. But unfortunately they were voting for national figures and Republicans still completely controlled the state. And that’s how they were able to pass these voter suppression laws and basically guarantee themselves longevity as the rulers of the state of Georgia. It is not over and it is not hopeless. Okay. Let’s never, ever, ever lose hope on issues like this. It’s just going to be more difficult. And the people of Georgia are going to need our help. They’re going to need our support and we have to be ready and willing to do whatever we can to give it to them so that they can vote these thugs out of office at the state level so that they can all get their voting rights back.