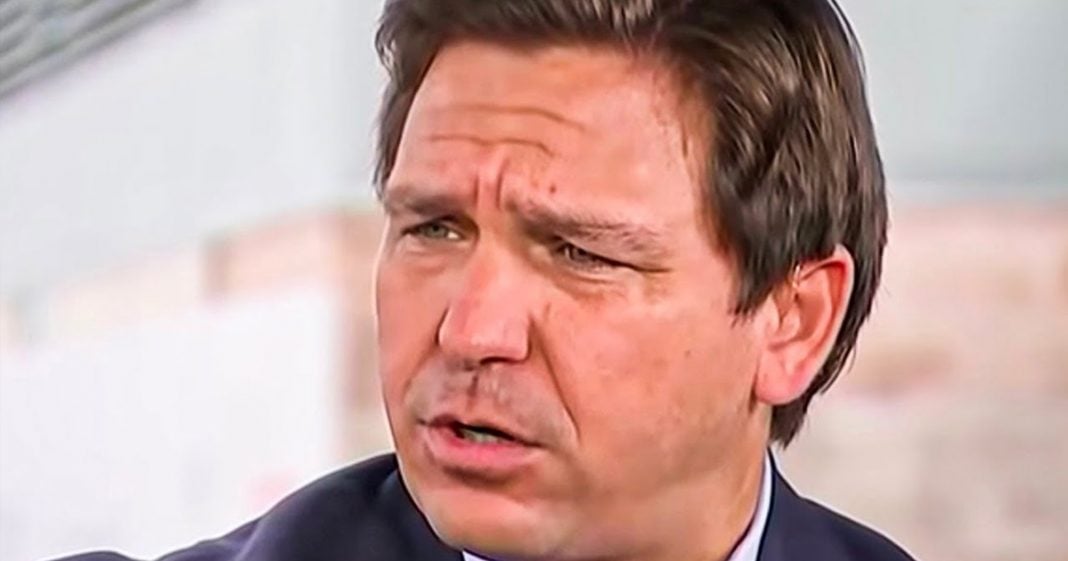 The Republican-controlled Florida legislature has passed a bill that would force college professors to be recorded in the state, and once a year they would be forced to undergo questioning about their personal political beliefs. Many students would also be subjected to the same kind of questioning. This is actual fascism in the United States, and the Republicans in Florida say that they are doing this to stomp out “cancel culture.” Ring of Fire’s Farron Cousins explains what’s happening.

Well folks, the state of Florida is officially about to become the fascist state of Florida as the state legislature has passed legislation that is now going to governor Ron DeSantis for his final signature on it, that will allow students in colleges across the country to secretly record their college professors. And then turn those recordings over to, I guess they’re going to create a panel and the panel is going to decide if this judge was, or excuse me, professor was a little too liberal. And if they are, then they’re going to have to what is it, adopt certain codes of conduct if the professor’s a little too liberal. This is terrifying and I’m not exaggerating and that’s not even one of the worst parts. The other thing that this new legislation is going to do, which by the way, this legislation says its goal is to cancel, cancel culture. So we’re going to get rid of cancel culture here in Florida, by going full-blown fascist. So there’s no room for dissent. What Ron DeSantis says goes. And if you go against that, you’re going to have to go in front of a panel and explain why you have a different viewpoint.

This is insane. When you look back on history and people say, oh, you know, how could the people let this happen? like this people. This is absolute just, I, I can’t, I just can’t process what is happening here. So anyway, the other part of the legislation says that every year college professors, and sometimes even the student body are going to have to answer questions about their political ideology. We’re going to have to identify where you fall on the political spectrum. You know, because we want to make sure it’s totally balanced here in the state of Florida. We don’t want too many liberal professors and we don’t want too many conservative professors. That’s bull crap. They, they do. This is, this is absolute insanity. This won’t hold up by the way, in a court of law. If this does hold up in a court of law, America’s dead. Our country is gone. Pack your stuff. Let’s get the hell out of here if this holds up in court, because this is full-blown fascism. And there’s a reason for this.

Many years ago and we talked about this here on Ring of Fire, you can go back again through the archives. The videos are there. We’ve done it many a times. The Koch brothers started essentially buying up college boards across the country. One of the places they started was down here in Florida. They wanted to impose a more libertarian agenda on college campuses, you know, with the teaching of business and economics and even some government courses. And the Koch brothers got their little fingers on colleges down here in Florida, doing that. They got put on college boards. They got to be allowed to decide who gets hired, who gets fired, all of that. And this is just the natural progression of that. You know, first we let the corporation come in and start hiring and firing professors. And then if that’s not enough, the government has to get involved and say, okay, come here, sit in front of these people, tell us what your political ideology are. Tell us, where do you fall on this spectrum. This, this is sinister. This is evil. This is villainous. This is vial. And to sum it up nicely, again, this is pure fascism happening in the state of Florida.