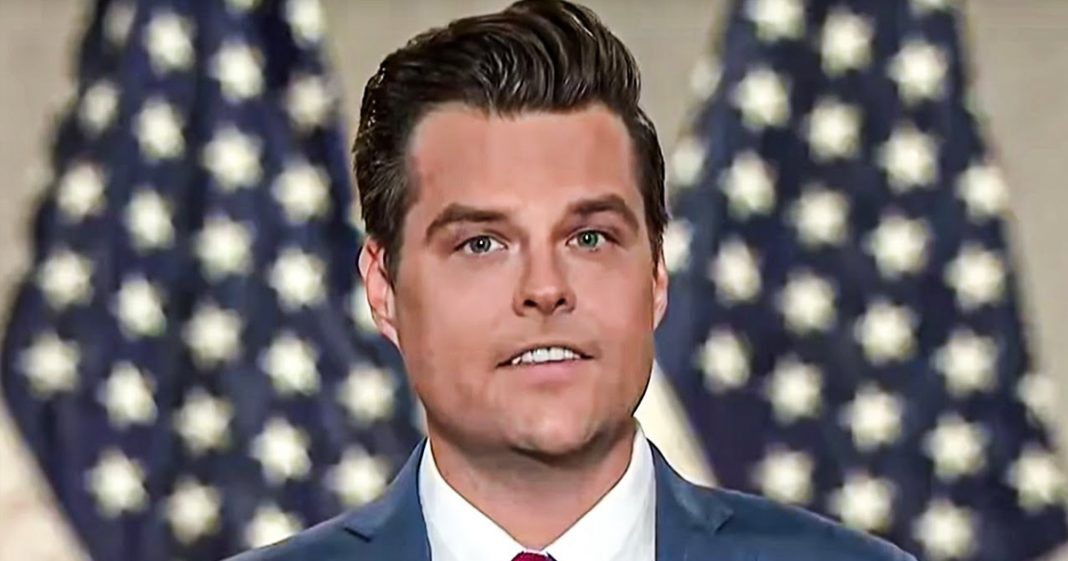 According to a report from The Daily Beast, there are receipts from Matt Gaetz showing that he paid an alleged trafficker via Venmo, and even included cutesy little descriptions that leave nothing to the imagination. It is glaringly obvious what is going on, and Gaetz has absolutely no defenses left to pull out. He needs to do the honorable thing and resign immediately as he awaits the inevitable charges. Ring of Fire’s Farron Cousins discusses this.

Republican Congressman Matt Gaetz might want to go ahead and start packing up his office in Congress after the last really few hours of information that has now come to light. We learned late yesterday evening, thanks to a report from the daily beast that Matt Gaetz had made a Venmo payment to Joel Greenberg, the guy accused actually charged with trafficking women. Made a Venmo payment to him for $900. Greenburg then turned around and paid three separate women a total sum of $900. Matt Gaetz also included a little note in the payment that pretty much made it explicitly clear that he was paying for a woman’s services. Um, I really don’t even need to go on to be perfectly honest with you. Like I could just end this at that. He’s done. That’s over with. I don’t believe there is a single jury ever convened in the history of the United States that would not look at that information, that receipt, because the dumb left his Venmo on public.

Anyway, the receipt is the smoking gun. Like we got you. We got you paying for these women that the trafficker brought in. You are done. Oh, and that’s not it either, by the way. Matt Fuller, one of the authors of the daily beast piece also posted an ominous threat on Twitter and said, there’s still more coming. So that’s not even the end of it. Oh and then of course we had the press conference, I guess you’d call it, from earlier in the day where Joel Greenberg’s attorney announced that, hey, my client’s going to be cutting a deal with the state and he’s, he’s going to start cooperating. And I bet Matt Gaetz isn’t feeling too great today. That’s what the lawyer said when he said that his client was going to start cooperating. He also said, and I bet Matt Gaetz doesn’t feel too great today.

Um, to anyone out there, anyone that thinks Matt Gaetz didn’t do this, can I ask you why you think that? Can I ask you what exactly it is that points to this man being innocent or to somehow being set up here? The guy did it. Okay. I, I think the evidence on that is pretty clear and I am, you know, I think it’s a fairly safe assumption now for me to say, in my opinion, Matt Gaetz did it. Right. I mean, I, I don’t understand how people can be kind of wishy-washy on this. I don’t see how people can say, well, I don’t, the evidence is there ladies and gentlemen. And so on Twitter last night I had a bunch of people, because I tweeted this out and they said, oh, but nothing will happen to him. You know, they always get away with it, the wealthy and the powerful and sure, sure. Okay. All right. Yeah.

There’s a good chance obviously, yeah, Matt Gaetz doesn’t end up going to jail. There’s a great chance that he ends up cutting some kind of deal and that he only goes to jail for a couple years or he gets, you know, five years of house arrest or whatever it is. But folks, any kind of deal or any kind of conviction, please understand that’s a career killer. So sure, we might not get Matt Gaetz locked away in a prison cell for the rest of his life. But what we do get is him not being our representative down here anymore. Like he would no longer be my Congressman. He would no longer be going out there on the media every single day to spread lies and misinformation and poisoning the well of public discourse. So I’ll take that as a win any day of the week. Sure, it’d be great to send him packing to prison forever, but it’s equally as great to not have his idiotic voice out there polluting the American political discourse anymore.