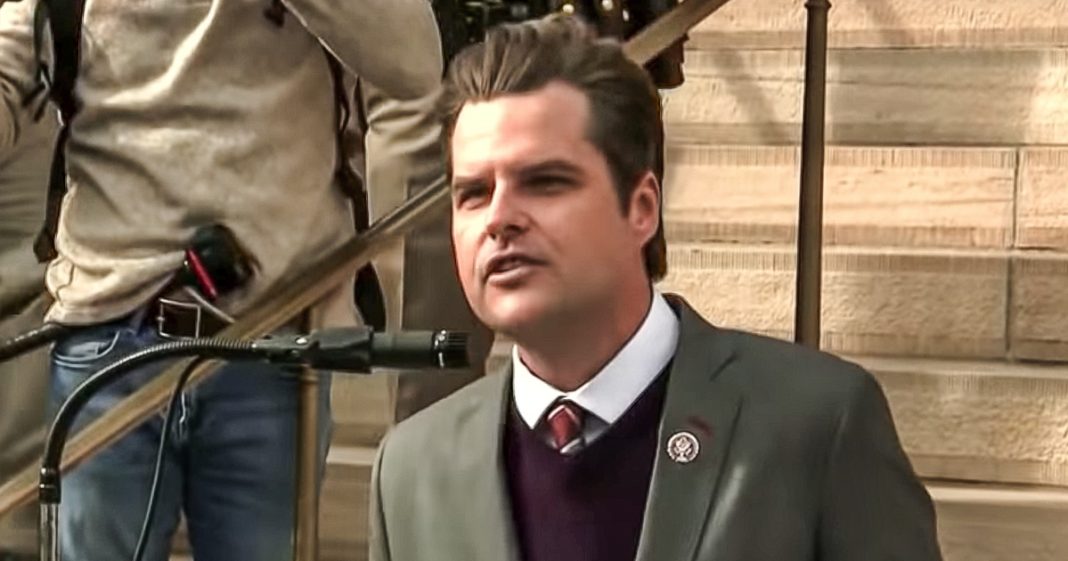 Via America’s Lawyer: FL representative Matt Gaetz is the subject of a DOJ investigation involving sex trafficking and soliciting prostitution from a 17 year-old. The allegations have turned Gaetz into a political pariah, as more details of his sexual impropriety emerge by the day. Mike Papantonio & Farron Cousins discuss more.

Mike Papantonio:             Congressman Matt Gaetz has been one of the most outspoken and visible members of Congress over the past few years, but he’s now hiding from view after it was revealed that he was the target of a DOJ investigation. Joining me to talk about it is Farron Cousins from the trial lawyer magazines, magazine. Farron, uh, Ooh. Wow. This guy’s career is over if not prison. I mean, that, that’s the simple take on it. This, this kid could go to prison.

Farron Cousins:                  Oh, absolutely. And look, every day or so. I mean, at this point, I would say every 36 hours, we’re getting some kind of new revelation about Matt Gaetz. Maybe it’s some kind of criminal activity, or maybe it’s just about him being a disgusting human being. But the news that’s been out in the last seven or eight days about him is absolutely career ending information. And his whole defense of this, that his family is being blackmailed, even if that were true and allegedly, there’s another investigation into that. He thinks that gets him out of trouble, but that blackmailing that he’s talking about has nothing to do really with anything he is facing. So the guy is going down in flames.

Mike Papantonio:             Let me tell you, I know McGee. I’ve known him for a very long time. He’s a very credible person. There is no way that McGee or that law firm was trying to extort Eddie Munster here. And by the way, it’s funny when he started looking like Eddie Munster is when all this started coming together and now, but the stories don’t end. You see. It, here’s the evolution I saw with, with Gaetz. We asked him one time, would he help on an, on a human trafficking bill, right? And yeah, yeah, yeah. I’m going to help because in state, when he was in state legislature, he was really good on the trafficking issue. He was good on anything dealing with trafficking. So we said, okay, he went to Washington. Can you help us on human trafficking? Yes, I’ll help you. He was the only no vote for legislation that we had to have. Everybody else said, this is wonderful legislation, legislation. Eddie Munster said, no, it’s not. So there’s a reason for it. Now we see it. Right?

Farron Cousins:                  Yeah. And, and one thing that I think is being established with all these stories that come out about him, whether it’s, you know, the, the hiring of prostitutes and doing drugs with them, the sex game, showing people topless photos of women he’s allegedly slept with. Bragging about having access to women from Joel Greenberg. It paints a pattern of behavior. And if you were trying to build a case against this guy, the first thing you would want to show is that this is in fact, a pattern. This has followed him around for his entire adult life. He did it in the Florida state legislature with that weird little sex game they played. He’s done it in this, you know, the US Congress, bragging to members, showing them pictures. You have them now coming forward and telling these stories. And it shows that this is who this man is.

Mike Papantonio:             I mean, who does that? Who says, Oh, gather around friends. I want to show you nude pictures and films of women I’ve been with. They look a little young. I got one hula hooping in the nude. Who in the hell does that? He thought that was good judgment. Tells you a lot about him. But Goldberg, okay. This all turns on Goldberg. Goldberg is going to turn on him. There’s zero question. Goldberg is looking at stalking political opponents. You know, that part of the story. He was looking at trafficking minors for sex. He’s looking at manufacturing fake IDs, wire fraud, delivery of 400, diverting, diverting $400,000 worth of tax money into something that benefited him. And now finally, he’s, he’s even, they’re even investigating for fraudulent use of COVID money payments. I mean, this guy, it’s just a matter of time. Goldberg is going to turn on this cat and it’s all over.

Farron Cousins:                  Right. And I think he’s facing somewhere between 20 and 30 charges. They actually just added more, not that long ago. So yes, he right now, has everything to lose, but he could gain a little bit if he starts naming names, because obviously these things don’t just happen in a vacuum. You know, he has to have clients. He has to have people he knows. He has to have sources. And Matt Gaetz could very easily be one of these people. We know Matt Gaetz toured his office. You know, he admitted that. The text messages have been revealed. So Matt Gaetz was there. They saw all the IDs laying around.