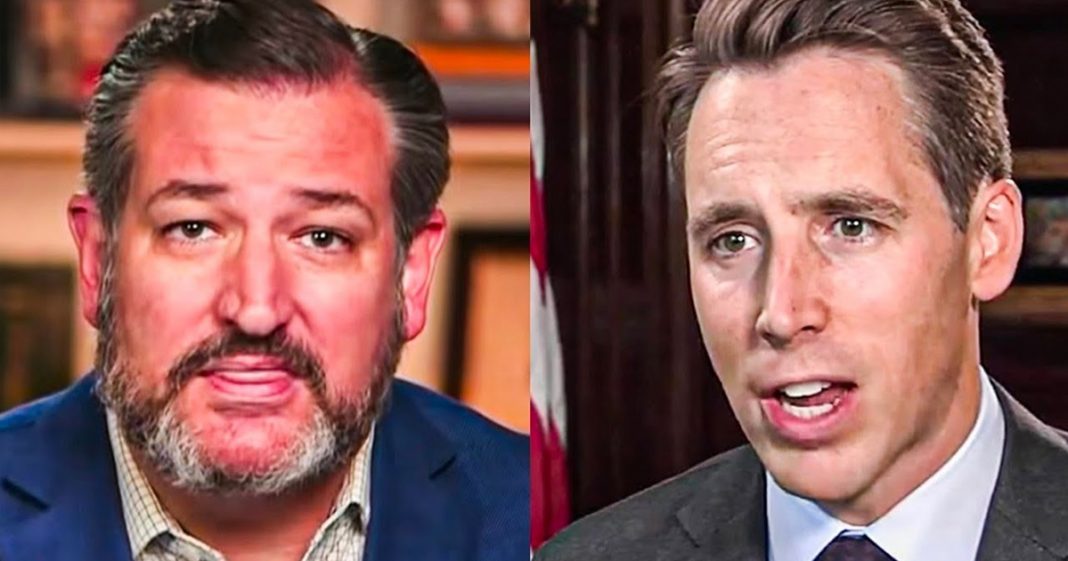 Republican Senators Josh Hawley and Ted Cruz hatched a plot to make sure that Biden failed earlier on in his administration. The two made a pact to oppose all of Biden’s cabinet nominees to cause long, drawn-out Senate battles where they could emerge as the resistors. But the plan fell apart because neither man upheld their part of the bargain, and Hawley ended up voting to confirm many of Biden’s nominees. Ring of Fire’s Farron Cousins discusses this.

According to new reports out this week, Republican senators Ted Cruz and Josh Hawley actually got together and they hatched a plan, a scheme if you will, to knee cap Joe Biden’s administration from the start. And here’s what their sinister plan was. They were going to not vote for any of his cabinet selections. Ha ha ha. And of course they were going to try to get other Republicans to do the same. We were just going to make sure, you know, he wasn’t able to move forward with his agenda. We were just going to stall things, slow him down and ha ha ha and honestly, to a degree they did because none of Biden’s nominees got approved until inauguration day. And typically by the way, in the past, these people do get approved prior to the new president being sworn in. But whatever, these people have all been approved now. We’re good to go.

And, it’s because Hawley and Cruz’s plan completely fell apart. And part of the reason it fell apart and this to me is the funniest thing, is because both Hawley and Cruz, rather than opposing every single Biden nominee, they actually supported a couple. Hawley supported way more, by the way, than Ted Cruz did. Ted Cruz only supported really just a couple, one or two really. But Hawley, you know, voted for quite a few of them. So these two brain geniuses, they get together and they say, we’re gonna, we got a little plan. We’re going to stick together. And then neither of them can even do it. Like not only could you not get everybody else to go along with your idiotic plan, but you guys couldn’t even follow your own idiotic plan. Like that’s rule number one when you’re hatching a scheme. Okay.

Like the first thing you gotta make sure that happens is that you stick to the plan. Like even before you try to convince other people to, to block all the nominees, you have to make sure you’ve done your part. All joking aside though, what this shows us is that these two individuals and I’m sure there were plenty more Republicans in the same boat, they had no interest whatsoever in bipartisanship. They had no interest whatsoever in actually being fair and decent legislators. They made this agreement to block these nominees before they even knew who some of these people were. Okay. It’s not like they objected to them based on the facts. It’s not because they objected to them because of their political ideology. They objected to them because they didn’t want Joe Biden to be successful. That’s what all of this boils down to.

And it’s similar to what we saw with Barack Obama. That is what they wanted to do. They held that little secret meeting and they said, let’s do whatever we can to make sure he’s a one-term president. Obstruct obstruct, obstruct and it happened from the beginning. And I hope to God that Joe Biden is paying attention to stories like this, because this tells you every single thing that you need to know about what those Republicans stand for. And right now, the only thing they stand for is to stand against you and your plans. It doesn’t matter what your plans are. It doesn’t matter that your plans are hugely popular with the American public. You know, the infrastructure plan, majority of Republicans even support it.

They support the funding of it by raising corporate taxes. Everybody’s on the same page. They love it. Minimum wage increase, they were for it. But your Republicans, and of course your Manchin’s and your Sinema’s on the Democratic side, these SOBs really, um, they don’t want anything good to happen. Manchin because he’s living in a delusional world where he thinks his constituents will be mad at him if he does something good. And then Republicans, because they just hate Democrats and don’t want them to do anything that could benefit people. Yeah. Real healthy system we have here in the United States, right guys?