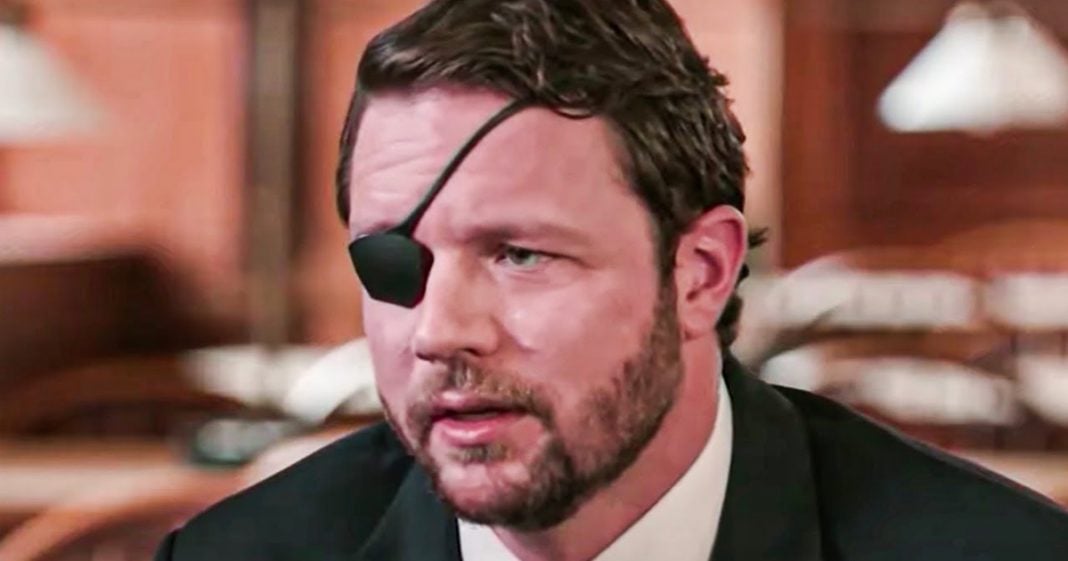 Republican Representative Dan Crenshaw isn’t the sharpest knife in the drawer, and he’s not shy about showing off that lackluster trait of his. This week, Crenshaw said that corporations opposing voter suppression efforts were somehow engaging in fascism, proving that this guy has absolutely no idea what that word means or what’s even happening in the country right now. Ring of Fire’s Farron Cousins discusses this.

Republican representative Dan Crenshaw doesn’t know what the word fascism means, but he sure as hell likes to throw that word around a lot. And after all, isn’t that Republicans, what Republicans do with any of these big, fancy words as soon as they learn that the word exists and that it’s usually used in a derogatory manner. They did it with socialism. They don’t know what socialism actually means, but by God, they’re going to call everything socialism. And now they’re doing it with fascism too. Oh, this is fascism. So the latest thing that Dan Crenshaw says is fascism is apparently corporations not being okay with voter suppression. During an appearance on Fox news on Wednesday evening, Dan Crenshaw referred to this all as fascism. Here’s what he had to say.

The Democrats have successfully captivated the institutions, you know, pop culture, Hollywood and education institutions and now are corporations into their own woke agenda. This is fascism, right? And they use cancel culture as a tool to impose their fascism on us. You know, I, I really want to quote Inigo Montoya from The Princess Bride here. Like you keep using that word. I do not think it means what you think it means. But for the love of God, Dan, have a little bit of self-awareness. Okay. You know, dictionary.com is free. Like you could actually pull out your phone, Dan, go to dictionary.com type in the word fascism and see that Hollywood not being okay with voter suppression is not what fascism is. Fascism is where you have a single ruler, typically some kind of dictator, who institutes, you know, hard line rules that if you do not follow, there are severely harsh penalties.

There is no room for dissenting viewpoints. That’s another tenant of fascism. The over abundance and over-reliance on patriotism, right. Having the corporations on your side as one of the things, but I think Dan you’ll understand if you actually looked at the numbers, the corporations are more on the Republican side than they are the Democrat side. Just because they issued a couple of statements saying, yes, we are obliged to say that we don’t like voter suppression. Suddenly you think we’ve devolved into fascism here in the United States. I got news for you, buddy. We’ve had elements of fascism creeping into our government here for a couple of decades. But none of it, none of it is coming because corporations don’t like voter suppression. We’re getting creeping fascism in the United States because of people like you, Dan. People that take corporate money and then go to Washington, DC, and do whatever the corporations tell you to do.

And it happens on both the left and the right. That’s the creeping fascism. Rules like the Patriot Act, domestic spying here in the United States. That’s creeping us ever closer towards fascism here in the United States. But again, a couple of corporations who again were basically obliged, right? It was an obligatory, we have to sign this statement saying we don’t like this or else people are going to be at us. That’s why they did it. They don’t give two craps one way or the other about voter suppression. They do not. They care about their sales and they realized that off conservatives, isn’t going to hurt their sales as much as off liberals. They did the math. That’s what they come up with. That’s why they did it.

They’re not suddenly woke. They’re not going to change their agenda. They’re not the good guys here at all. They’re still your donors, Dan, but they may not be if you keep accusing them of fascism. So you may want to walk the line a little better, right? Just ask Mitch McConnell. Watch what happened to him earlier this week when he said corporations should get out of politics. Two days later, he’s getting phone calls and now he’s saying, oh no, corporations come back to politics, please. Yeah, so you may want to be careful what you say, Dan, because there is fascism in the United States and you’re kind of subjected to it because of your loyalty to those corporations.