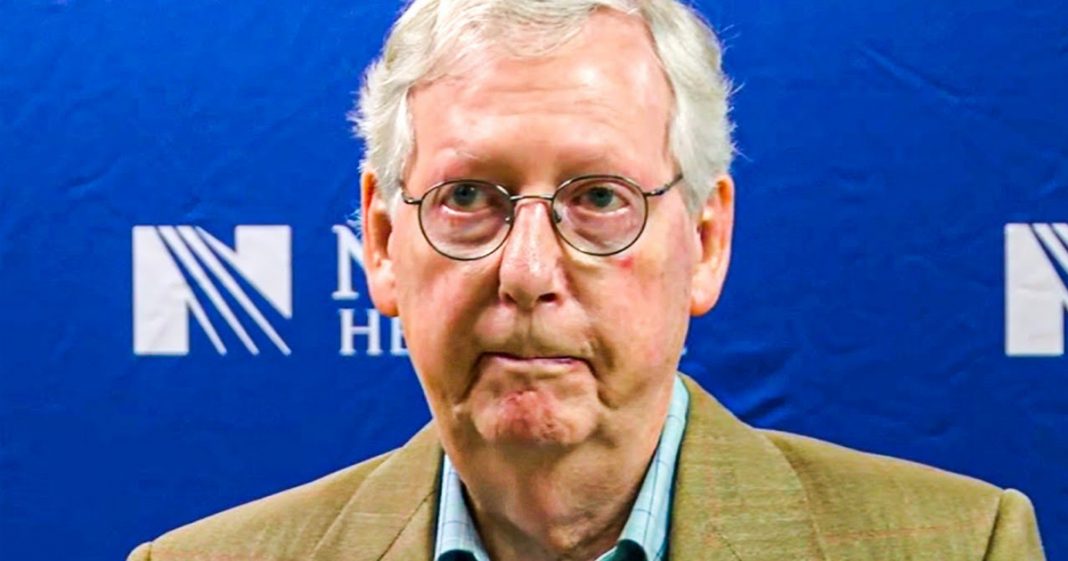 Mitch McConnell said the other that corporations shouldn’t get involved in politics, and apparently that made the wrong people angry. On Wednesday, McConnell was forced to walk back his comments and admit that he does want corporations involved in politics. There’s no doubt that he got some angry phone calls from his corporate masters wondering why he would say such a thing, and it is glaringly obvious that he’s stuck between a rock and a hard place. Ring of Fire’s Farron Cousins discusses this.

Earlier this week, Mitch McConnell had a moment where he actually spoke a little bit of truth and said, corporations should not be involved in the political process or involved in policy. And yes, he was 100% right about it. He was just right for the wrong reasons, because he was mad at the so-called woke corporations who aren’t big fans of voter suppression publicly. Behind the scenes we know they actually don’t care about it because they’ve given $50 million to Republican politicians who support voter suppression initiatives. But publicly they have to act like they don’t like it. Mitch McConnell didn’t like that. He came out, said get out of politics. And then yesterday, the day after he made those other comments, and I’m assuming after probably a couple of phone calls from some of his corporate masters, Mitch McConnell came back out and said this.

Mitch McConnell:             Yeah, yeah, let me, let me, I didn’t say that very artfully yesterday. They’re certainly entitled to be involved in politics. They are. My principle complaint is they didn’t read the darn bill. The president of the United States called the bill, a Jim Crow exercise to suppress voter turnout, presumably based on race, because that’s what the Jim Crow allegation is. That bastion of conservatism, the Washington Post gave the president four Pinocchios for lying about it.

Well obviously corporations should be involved. No, no, you got in trouble. You got in trouble. Okay. You said something that was accidentally true. Something that believe it or not a majority of people in this country support. And then again, I am willing to bet you went back to your office or your home or whatever it is, and your phone was blowing up. You were getting all kinds of phone calls, right? From every corporation that’s ever given you $50,000 and said, hey, bud, um, heard ya, heard you on the news today. Um, you want to tell me what that’s about? Mitch McConnell got in trouble by his mommy and daddy and his mommy and daddy happens to be all of corporate America. You know, I, I’ve repeatedly said this over just the last few days. There is no actual rift taking place between corporations and the Republican party. Okay. The corporations still want the Republicans to deregulate them and cut their taxes. In the meantime, Republicans want the corporations to continue funding their campaigns. Because if they don’t have that money, they’re not going to win.

Then they can’t continue with their voter suppression and then, oh my God, it’s all downhill from there for the Republican party. So they need each other and they can publicly feud all they want. We all know that behind the scenes, they’re keeping a pretty tight ship. They’re keeping people in line. They’re not letting anybody kind of stray too far or say anything a little, you know, say anything that can’t be walked back. We’ll put it that way. And that’s why Mitch McConnell had to come out and publicly say like, oh, well, I guess we can have. No, you got scolded. And I would love, love to have been a fly on the wall during those conversations because I want to know what those corporations told you. And I would have loved to hear your idiotic argument as to why you said what you said. But he’s already backtracked it. He had an oops moment, I guess you could call it, you know, a brain fart. But whatever it was, Mitch McConnell is back on track understanding that he wouldn’t even exist today if corporations weren’t pulling the strings in American politics.