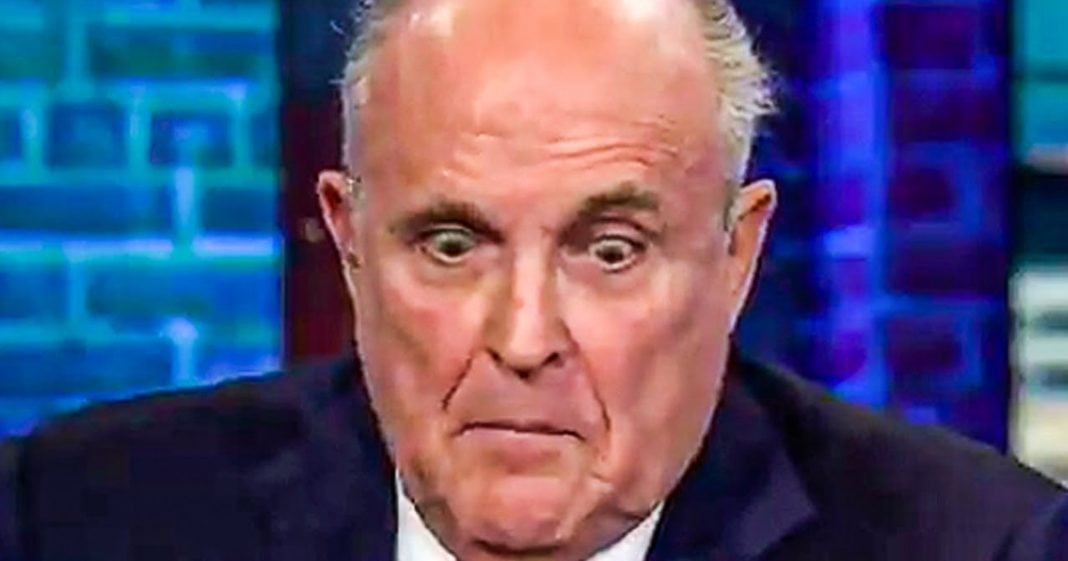 Rudy Giuliani’s lawyers submitted a 10-page motion to a judge this week, arguing that the defamation suit against Rudy Giuliani filed by Dominion Voting Systems should be dismissed. And they used one of the dumbest legal arguments that we’ve seen since Giuliani himself tried to overturn the election. Giuliani is currently facing a $1.3 billion lawsuit from Dominion, and his lawyers are apparently phoning it in. Ring of Fire’s Farron Cousins discusses this.

Rudy Giuliani sent his lawyers to court this week to try to get the $1.3 billion defamation lawsuit filed against him by dominion voting systems dismissed. They wanted the judge to go ahead and outright dismiss the case. They, they, they put forward a 10 page filing, which to be honest is a rather small filing for this kind of thing, and they offered quite possibly the dumbest legal reasoning that I think I have ever seen. Here is what they wrote in this legal brief. This is why they want the case dismissed. Giuliani denies that he has defamed plaintiffs, or that he has engaged in any wrongful or malicious conduct toward plaintiffs. Should this matter reach legal or factual adjudication on the merits, Giuliani will provide a vigorous and complete response.

So you should dismiss this case judge, because our guy says he didn’t do it. I mean, how you gonna put a guy on trial when he says he didn’t do it, judge? Boom, checkmate, mic drop. What a bunch of buffoons. And to be honest, I’m not even blaming the lawyers. I don’t actually think they’re buffoons because these are lawyers who know what they’re up against. They know they don’t have a leg to stand on. So Giuliani was probably like, no, you’ve got to file a motion to dismiss. Use whatever argument you have to. And they were just like, screw it. All we’ve got is he said he didn’t do it. So maybe let’s just, let’s just go with that. But this is a $1.3 billion defamation lawsuit. Okay. $1.3 billion and his lawyers are kind of phoning it in. They know he did it. What they’re going to have to do is come up with a better argument. You can’t go to court and just say, nope, he didn’t do it. It’s on tape guys. It’s on video.

There is literally hard evidence of Giuliani saying these idiotic things. Sure, he didn’t file any of that or argue it in court. But he said it, he said it in interviews. He said it at press conferences. This is all stuff that’s verifiable. You just go to YouTube and it’s there. So stop trying to say he didn’t do it and maybe start working on some kind of better defense of, yeah he did it, but, but. I don’t know, because I’m not a lawyer and I don’t work for Giuliani. So that’s on you guys. But I can promise you filling that blank is going to come across a lot better than walking into a court, staring at video footage of your client saying these defamatory things and then turning around and saying, no, he never did that. The, that’s, no. No, he didn’t. That’s not him. That’s not our guy. We know he said the things, that’s what he’s being sued for. So come up with a better legal argument, unless of course you just don’t care. And to be honest, can’t blame you if you don’t care if Rudy Giuliani gets popped for $1.3 billion, because honestly I would love to see that happen.