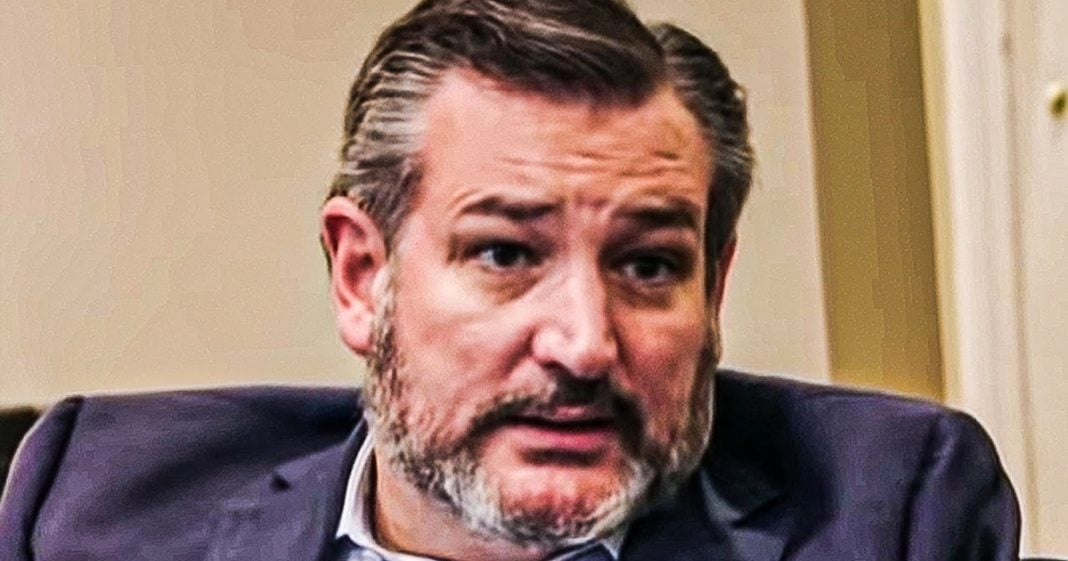 According to a new complaint from the Campaign Legal Center, Republican Senator Ted Cruz appears to have used campaign funds to advertise his book from which he gets a percentage of the sales. If true, this is an illegal use of campaign funds for self-enrichment, and Cruz could be subject to an investigation. Cruz might be a dolt, but he isn’t an idiot, and his campaign is already saying that they have nothing to worry about with these new allegations. Ring of Fire’s Farron Cousins explains what’s happening.

According to a complaint filed by watchdog organization, the campaign legal center against Republican Senator Ted Cruz, they’re alleging that Ted Cruz used campaign funds to illegally enrich himself. And he did that by using those campaign funds to purchase advertising on social media, to sell his book from which he gets a 15% royalty. Ted Cruz’s book deal by the way was $400,000 upfront and then 15% of sales. So every single book sold Ted Cruz got 15% off of it, every single new sale, not resales. And these ads that he purchased with campaign funds because again, that is verifiable, linked directly to outside sellers, original sellers and yes, that is important to note, of his book. So it took you to a link to buy a brand new copy of his book from which he would get 15%. You’re not allowed to use campaign funds to enrich yourself in any way.

So the campaign legal center is, is seemingly correct on this. And they filed this complaint with the Senate, told them they need to look into this because it’s pretty clear from their end that Ted Cruz broke the law here, but Ted Cruz’s people came out and they said, nope, didn’t break the law. Nothing wrong, nothing to see here. We know for a fact, he didn’t get a dime off of any of those books. What are you going to do about it? And here’s the problem, Ted Cruz, as, as, as much as we all dislike him, as much as America dislikes him, as much as even conservatives dislike him, he’s not an idiot. Yes, he was an idiot for going to Cancun. But I think that was just a rare miscalculation by Teddy boy. He knows what he’s doing and more importantly, he’s surrounded himself with people who know what they’re doing. And the problem is that if those ads sold books, they don’t have a way to track it.

So, yeah. You can’t prove that Ted Cruz made any money off of that. And that’s the sick and twisted part and that’s how sick and twisted, by the way, our entire campaign finance system is. That’s how ridiculous these little loopholes are and that’s what Ted Cruz found. Ted Cruz found a loophole that he knew nobody would ever be able to prove one way or the other and he took advantage of it because all they know is, hey, we sold a book. The book seller is not going through on their web traffic to see where the traffic came from. Are those things that are traceable? Sure, sure. Most likely, for a specific amount of time. Anybody who’s ever worked with the backend of websites understands that each website pretty much, you know, depending on who built it, your analytics, everything is a little weird.

What it tracks, what it doesn’t. Do you have the plugins, were the plugins even working at the time? Do you save the data? Because it doesn’t just stay there indefinitely. And Ted Cruz, I guarantee you if he didn’t know this than somebody else on his team did. And they took advantage of it because unfortunately, even though with the campaign legal center is presenting is clear and obvious, the problem is you wouldn’t actually be able to prove it. And Ted Cruz knew that and he snuck by, by breaking the rules, but still not technically breaking the rules. At least not in any way that somebody would be able to prove.