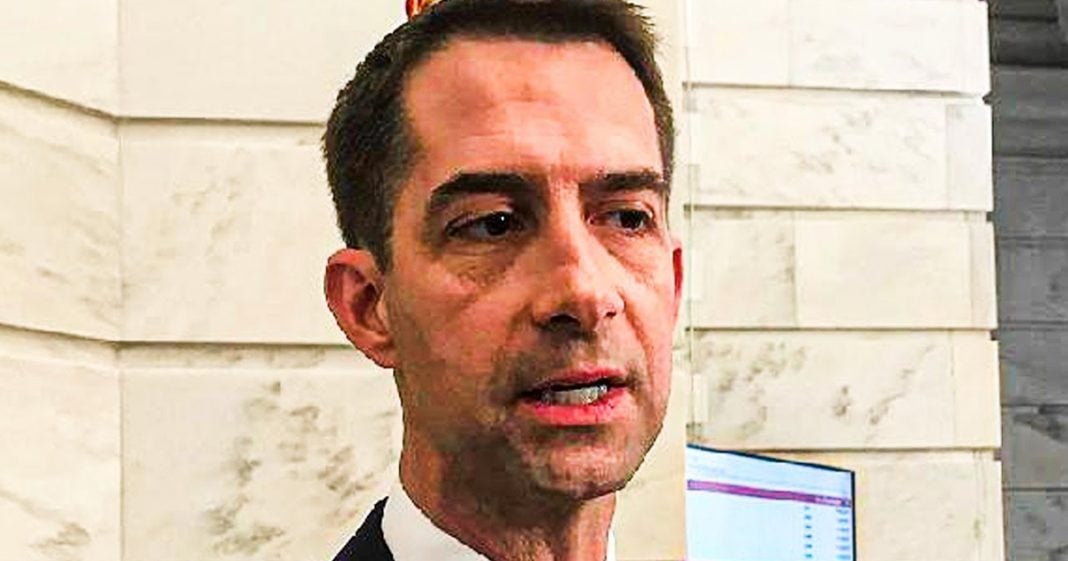 Republican Senator Tom Cotton has been a fierce opponent of criminal justice reform for years, and on multiple occasions – including yesterday – he tweeted out that America has a problem with UNDER incarcerating people. This is a massive lie, as America has the highest incarceration rate in the world, along with the largest prison population as a whole. Ring of Fire’s Farron Cousins explains why Tom Cotton keeps going back to this same issue.

Fascist sociopath Tom Cotton on Tuesday of this week, tweeted out that America has a serious under incarceration problem. Now he did this, it was a quote tweet of a story talking about the rise in crime in the United States that actually happened in 2020, which is a bit bizarre considering we’re in a pandemic. We were all locked down, but yes, statistics do show that there was a rise in crime in 2020, and Tom Cotton thought this was a perfect opportunity to trot out his trusty old talking point that America is quote under incarcerated. And yeah, that’s right. This is a trusted old talking point from Tom Cotton because you go back in his history, the man has literally been saying that exact same thing for five straight years. So this was not a new thought that Tom Cotton had. It’s just the first time that he was able to say this, that anybody actually paid attention to him.

I took the time, I went back through the dude’s history and yeah, this is his big theme. For the last five years, he has been telling us, of course, nobody was paying attention because he was a nobody then. I don’t blame you. But now we are and now we know, Tom Cotton wants more and more Americans locked up. And for the record, I’m sure everybody already knows this at this point, the United States does not in fact have an under incarceration problem. In addition to having the highest prison population per capita here in the United States, which means we have the largest percentage of our population in jail. We also have the overall largest prison population. So just in total numbers, we’re beating everybody. And yes, that includes countries that have larger populations than we do. So there is no under incarceration problem here in the United States, but Tom Cotton wants you to think that there is because Tom Cotton and so many other Republicans like him can only succeed in their campaigns when they’re selling you fear.

When they’re trying to tell you that you can’t safely walk down the street, you can’t safely go to the grocery store because of all these violent criminals wandering the streets. And then they use these statistics. See crime is increasing. We have to lock everybody up. No second chances. You know, these drug addled gun toting lunatics, except they wouldn’t call them gun toting. No, no, because see, those are the people we actually do need to look out for. Those are the people that actually do need to be in jail. But those are, for some reason, the people excluded from Tom Cotton’s under incarcerated comments. Cotton has also been a fierce opponent of any kind of criminal justice reform. He does not want reduced sentencing. He wants more prisons, more private prison money for himself and his campaigns, by the way, that’s kind of the root of all of this.

And he wants to sell you fear. That is what is happening with Tom Cotton. He has been trying to do it for five years, and now that everybody’s finally paying attention to him, he may actually have a chance of being successful. Again, five years ago, this guy was a rookie. This guy was a nobody. We didn’t care about him. Now suddenly he’s a major player in the Republican party. Perhaps a contender even for 2024. So he is going to ramp up this kind of stupid talk that completely flies in the face of all available evidence, all the statistics and data, and he’s going to do it because he wants to sell you fear and he wants more private prison money to run his campaigns.