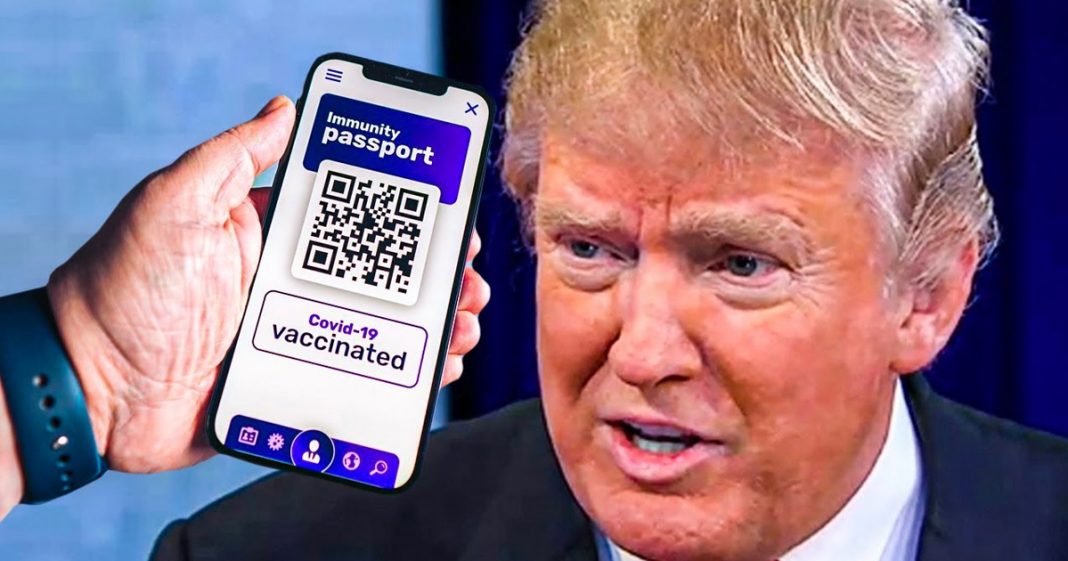 Republicans have an upcoming donor retreat in the state of Florida, but they understand the dangers of Covid-19, so they want everyone entering the event to show proof that they have tested negative for the virus, even if they are vaccinated. Kinda sounds like the same kind of “passport” that Republicans are pretending to freak out about right now, including the governor of Florida who just signed an order banning vaccine passports. Ring of Fire’s Farron Cousins explains the double standards and hypocrisy of today’s Republican Party.

Later this week in a gathering that really should be illegal, the Republican party is bringing in some of their wealthiest mega donors down to Palm Beach right here in Florida. They’re going to meet, they’re going to hobnob. They’re going to talk strategy. They’re going to talk policy. And of course, Donald Trump is going to be hosting part of this at Mar-a-Lago. But this is an official RNC event. That again, you’re meeting with your donors and they’re going to tell you what they want from you. How is this even legal to begin with? But there’s another issue and obviously bigger issue at hand here. And that is the fact that in order to get into this retreat, in order to walk through those doors, you have to have a little piece of paper, almost a, a passport if you will, that says that you have tested negative for COVID-19. You effectively, in order to get to this Republican party donor retreat, have to have a COVID passport saying that you’re clean. And if you don’t have that, you’re not getting through those doors.

And this comes just in the middle of a time when Republicans, including the Florida governor who signed an executive order banning them, but Republicans are freaking out about so-called vaccine passports. Oh my God, the vaccine passports, it’s going to be oppression. It’s going to be horrible. It’s going to be just like the, the Jews during Nazi Germany is what they’ve compared it to on social media. And here this party, that is apparently just immune to irony is saying, yeah, you can’t come to our special rich people gathering unless you have this little passport. That by the way, we totally think is stupid and oppressive. But no, for real, we understand the dangers of COVID and if you want to get in here to this closed door meeting, you got to have that card because we’re not taking any chances with our health. No, no, no. We’ll take chances with your health. And that’s what these idiot members of the Republican party need to understand, folks. This isn’t because they think vaccine passports are actually oppressive. They think you’re stupid enough to think that they’re oppressive. So they go on these weird wild tangents, make these ridiculously offensive analogies. Like I pointed out earlier, what they’ve been doing on Twitter, all because they’re totally fine with risking your health.

They’re totally okay with that. They don’t care if you live or die. But those donors by God, we got to protect them. The same corporate donors who, by the way, this same week also they’re, they’re saying, get corporations out of politics. Okay, cancel your meeting then. Send them all back home. You don’t even need the vaccine passports or the COVID passports at this point. But the Republican party is filled with so much hypocrisy that I don’t even know how they can stand up anymore. I mean, literally everything they do is, do as I say, not as I do. Like if the Republicans tell you, you need to do something, you can pretty much guarantee at this point, they’re doing the opposite. Oh, vaccine passports are terrible, but you’ve got to have a COVID passport to get into our little, little special meeting here. Ah, corporations are the worst thing in the world, but we’re meeting with them later this week to get more of their money. Everything they say, they’re doing the opposite. And again, the average work-a-day Republican out there doesn’t pay attention to the second part. They only have enough attention span to pay attention to the, do as I say, not the do as I do.