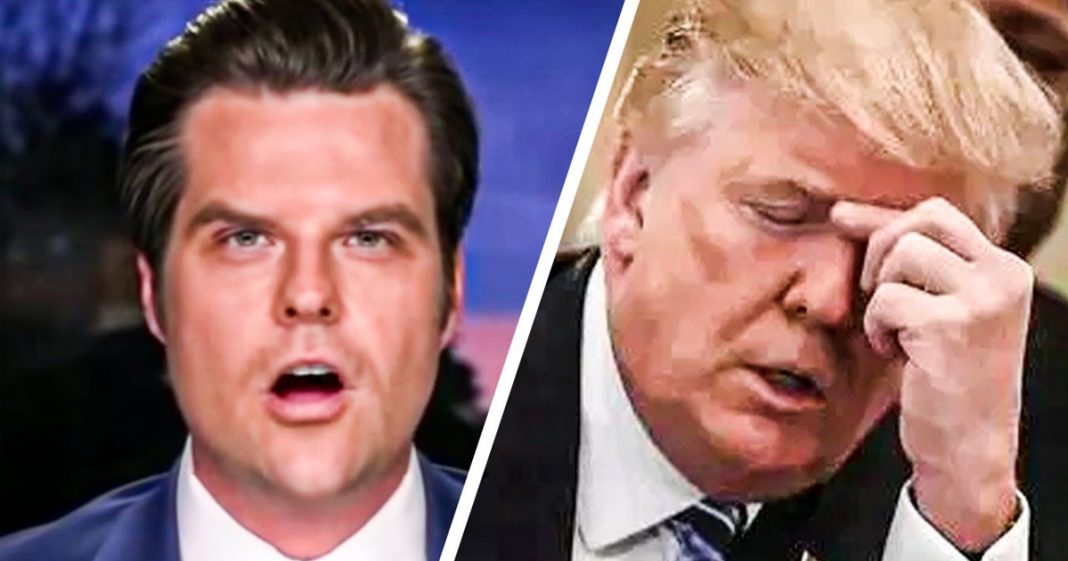 According to new reports, embattled Republican Representative Matt Gaetz begged Donald Trump to give him a blanket pardon before Trump left office. The pardon never happened, but the fact that Gaetz even wanted one is a pretty clear admission of guilt, or at the very least an indication that he suspected to be indicted in the future. Ring of Fire’s Farron Cousins discusses this.

News broke yesterday saying that embattled Republican congressmen Matt Gaetz here from the state of Florida, actually called Donald Trump in his final days in office and begged for a blanket pardon for himself, but also by the way, for other Republicans in Congress. So we’re, we’re going to circle back to that in just a little bit, but okay. Matt Gaetz calls up Donald Trump says, I really need this blanket pardon. And as we discussed back in the pardon days, you can give someone a blanket pardon. You can basically issue a pardon that says, if you committed any federal crimes from this date to this date, you don’t have to list the specific crimes, but if you committed anything from here to there, you’re pardoned from it, don’t worry about it. And that is the kind of pardon that Matt Gaetz was allegedly seeking from the president of the United States.

Now, why, right? The Supreme Court tells us that the acceptance of a pardon is an admission of guilt and Matt Gaetz wanted a pardon and he was going to accept it. Had he been offered one. So shouldn’t we go ahead and take that as, as kind of an admission of guilt? You know, when you go along the chain, let’s cut out the middlemen. The guy wanted a pardon. He would have accepted a pardon. Therefore, in the eyes of the court, he was admitting to guilt. Now I know legally that wouldn’t hold up, but come on. It’s pretty fricking obvious at this point that yes, Matt Gaetz did something. We’re not going to say, you know, we don’t know what it is, but he did something illegal. You don’t seek out a blanket pardon for yourself, unless you know that you’ve done something illegal and possibly know that the walls might be closing in a little bit.

Not to mention the fact that he did want pardons for some of his buddies in Congress too. Now, now that’s a little more curious, isn’t it? And we know that Matt Gaetz has not been a stranger to boasting to these individuals about having access, as he put it, to girls provided by Joel Greenberg. He showed them nude photos, allegedly of the women that he has slept with. So is it possible there’s other members of Congress that might be involved in the same kind of crap that Matt Gaetz is alleged to have been involved in? Uh, that’s a question that investigators are going to need to answer. So obviously all of the people, news outlets, whatever it is, reporting on this story. So they reach out to Matt Gaetz and his spokesman basically the biggest non-denial ever and admits it, because he says, yeah, this has been in the news forever.

Trump even retweeted it. So what’s the big deal? What, what do you mean, what’s the big deal? Your guy wanted a pardon, but allegedly is innocent of everything that he is being accused of. That, that’s not, that’s not how this works. If he was truly innocent, if there was no evidence to implicate him in any of these things he has been accused of by the media, he wouldn’t have needed a pardon, especially back then, because nobody even knew about it. So no, we’re not buying your idiotic, pshh, so what, what’s the big deal? No, it is a big deal that your guy wanted a pardon when to this day he maintains, he did absolutely nothing wrong and has nothing to worry about. If he had nothing to worry about, he wouldn’t be after that pardon.