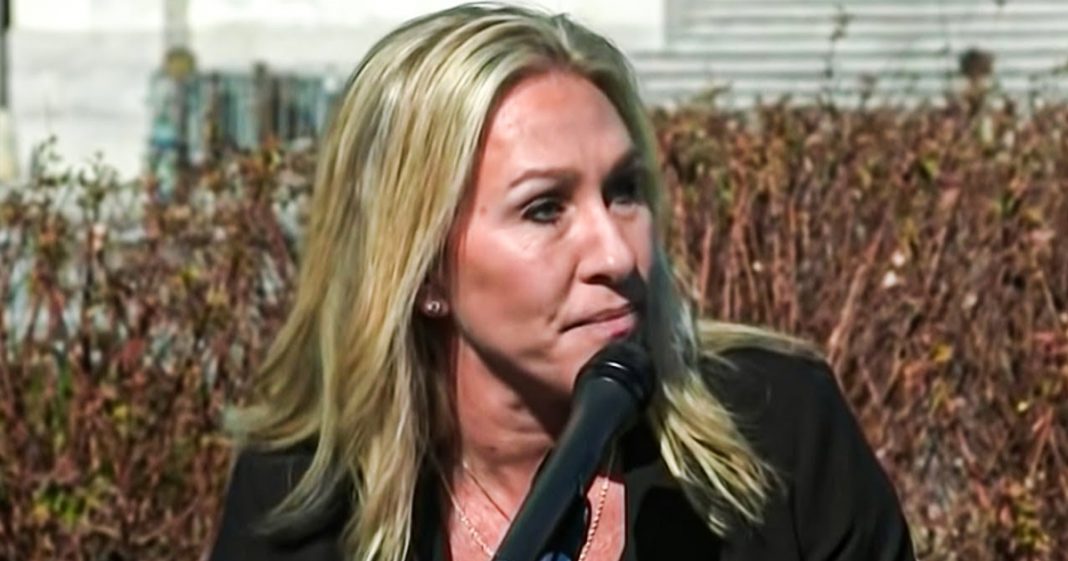 Republican Representative Marjorie Taylor Greene has never been accused of being smart, and her latest Twitter tirade proves that she never will be. Greene said that it was a good thing that the MLB pulled their all-star game from Georgia, and now she wants even more businesses to leave her state. This move will result in thousands of lost jobs and hundreds of millions in revenue lost for her state, but she’d rather make a stupid point than help her constituents. Ring of Fire’s Farron Cousins discusses this.

I’m willing to bet that at no point in her life, has anyone ever accused Marjorie Taylor Greene of being intelligent. And her little Twitter tirade that she had yesterday kind of proves that no one is ever going to mistake her for an intelligent human being. After it was announced that the MLB all-star game would be leaving the state of Georgia and heading over to Colorado, Marjorie Taylor Greene sent out this tweet, she said, good. Now take the rest of woke progressive Democrat bullies like Hollywood and Stacey Abrams with you. So she’s actually saying good to this company, this organization, major league baseball, moving a game that was projected to bring $100 million in revenue to the state of Georgia and her response is, good. That’s a hundred million dollars that’s not going to be spread around your state, you moron. And now you’re saying you want Hollywood to leave too?

You’re the biggest idiot in Congress. Like I’m, I’m not kidding. Marjorie Taylor Greene is the dumbest person in the United States house of representatives today. End of story. But not end of this story. See Hollywood, as we all know, for the last decade or so has been moving more production over to the state of Georgia. Not full-time, right. It’s just, it’s a cheap place to film. It’s got good landscapes. It’s got the Atlantic ocean for when you need to film stuff down by the water. It’s a really good, you know, place to, to go between Hollywood and Georgia and Hollywood and Georgia. It’s got everything. And most importantly, again, it’s super cheap because the state of Georgia has incentivized them to come there and in return, obviously they spend millions and millions of dollars every single year. They bring money to local economies. They employ people from the state of Georgia. Overall, it is a huge net benefit to the state of Georgia. And here you have one of your members of Congress saying, get out of my state.

You know, Hollywood’s not even involved, by the way, in this current fight and Marjorie Taylor Greene is like, good, you can get the hell out of here too, ah. Watch we do these weird chin-up things. This is nuts folks. This woman would rather stand on her idiotic high horse, or what she thinks is her high horse, looking down at the rest of us for allegedly being woke. She would rather do that than watch her state prosper. She would rather scold these woke corporations, than watch her constituents get decent paying jobs with these industries that she is now telling to get the hell out of her state. This woman is a walking calamity, I think is probably one of the best ways to describe her. Everything she touches, everything she says just absolutely falls apart. I hope Georgia does better in 2022. Okay. I sincerely hope that I do not have to mention this crazy person’s name again after the 2022 elections. But that’s 100% up to Georgia and you’ve seen what she’s done. She is encouraging these corporations to pull money out of your state. That could be your job. That could be your livelihood. And is that really worth it to keep somebody like Marjorie Taylor Greene in Congress? I think we all know the answer to that.