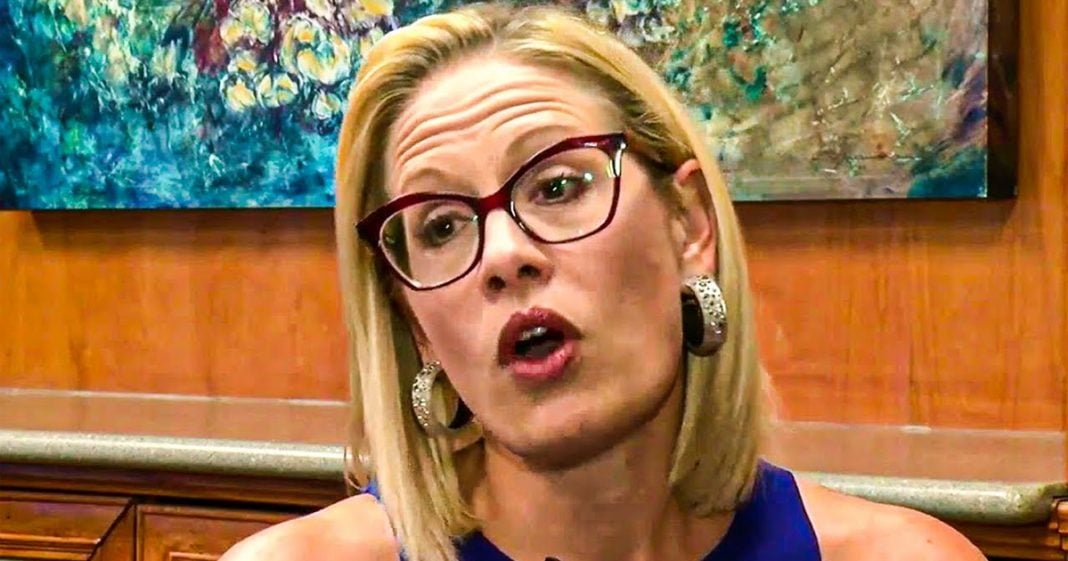 In an interview with the Wall Street Journal this week, Democratic Senator Kyrsten Sinema admitted that the Senate is broken due to obstruction and rules that are in place to allow for this obstruction, but she then admitted that she won’t do the one thing that could actually stop all this: Abolish the filibuster. There is no sense in admitting that something doesn’t work if you have no plans or desires to actually do anything about it, which makes us believe that Senators actually like the chaos. Ring of Fire’s Farron Cousins discusses this.

Democratic Senator Kyrsten Sinema this week told the wall street journal that yeah, the Senate is broken but we’re not going to do a thing about it. And she doesn’t want to do anything about it, she tells the wall street journal. Here’s her exact quote. When you have a place that’s broken and not working, and many would say that’s the Senate today, I don’t think the solution is to erode the rules. I think the solution is for senators to change their behavior and work together, which is what the country wants us to do. Isn’t it sweet? Isn’t it fun? Um, you’re living in the land of fairytales and unicorns, right? Where everybody gets along and everybody gets a free puppy and everybody gets to have all this fun and there’s no consequences and there’s no responsibilities. And every night we sit around the campfire and we make smores and we tell each other why we just love each other so much. That is a world that doesn’t exist. And I got news for you. That’s a world that’s actually never existed here in the United States.

I mean, if you think that there has been any point in the history of the United States where everybody in the Senate has gotten along, I suggest you go look up the caning of Charles Sumner, where the dude was literally beaten half to death on the fricking Senate floor. The Senate has always been a piece of crap here in the United States. And I love that she admits that. She’s like, yeah, it’s totally broken. We can’t do anything because nobody wants to work together because of obstruction. She’s right about that. But then in the same breath, in the same sentence that doesn’t even have a comma in it. She says, but we’re not going to do anything about it. It is what it is. I just hope I get to keep, keep my job and keep coming back here because this is fun, right? I get to, I get to be a GIF. This, this is nutty. So here’s the thing. This is what I am actually starting to believe about Democratic members and Republican members of the Senate.

They’re the problem. And then over in the next state, the Senator who’s a member of a different party is saying the same thing, just with the roles reversed. Well I can’t do anything, I can’t do the things you want me to because of them. You have to get rid of them. And it’s an endless cycle. Why? Because they actually love the chaos because that is their number one campaign talking point. If they get rid of the filibuster, there’s no more excuses. There’s nobody left to blame. They have to shoulder that responsibility themselves and that scares people like Sinema and Joe Manchin to death. That’s why they oppose it and that’s why they go out there and give these idiotic interviews. Not because they believe these things, but because they think we’re stupid.