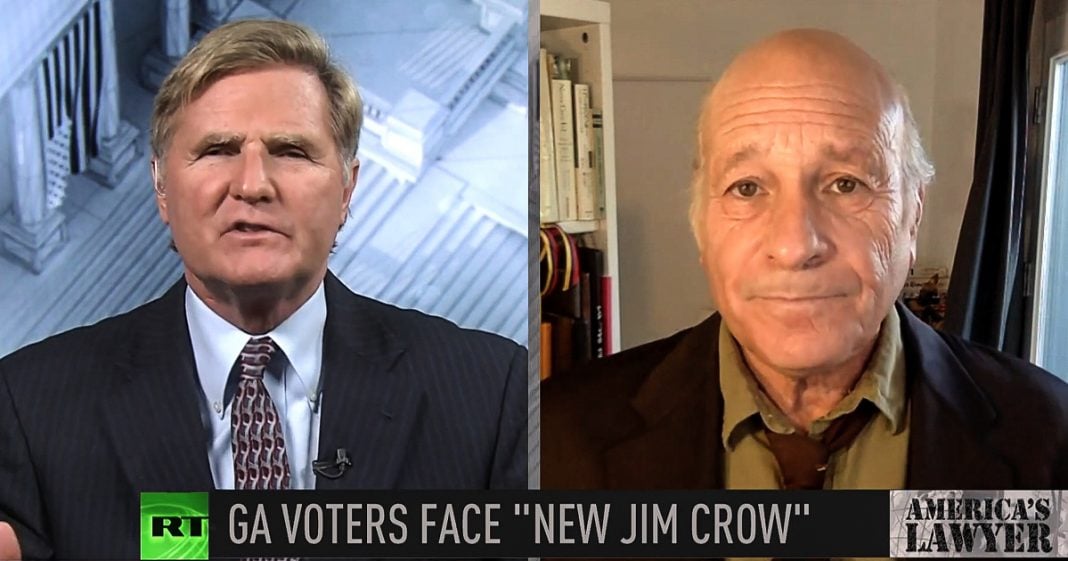 Via America’s Lawyer: GA governor Brian Kemp enacts a voting bill being criticized for ushering in a “New Jim Crow” era, punishing Georgians who already have to wait hours for their chance to vote. Investigative journalist Greg Palast joins Mike Papantonio to break down the latest in state-sponsored voter suppression.

Mike Papantonio:             A new voting law is being dubbed the New Jim Crow, it’s caused a media frenzy and actually resulted in the arrest of a state representative. But anti voter legislation is nothing new in the state of Georgia. Joining me to talk about this is investigative journalist, Greg Palast, who’s been tracking voter suppression efforts for 20 years, and that’s a fact, Greg. I remember interviewing you about 20 years ago for the first time when you started uncovering all this, and you might remember with Air America and it just never stops does it. First things first. Greg, tell us about the significance of this new Georgia law and how it impacts voters. Take us there.

Greg Palast:                          Well, first of all, let’s begin with the fact that, that Georgia has always been running Jim Crow elections. It’s one of the worst States and I’ve been investigating there for eight years, originally for Rolling Stone and Salon and the Guardian. And now I’m working with black voters matter fund. And, so it’s an old story and now it’s just getting much worse. They panicked because despite everything that they tried, they couldn’t stop Biden, Ossoff and Warnock from winning Georgia, because it is a blue state as Martin Luther King the third told me eight years ago, when I began working there and investigating. He says, you just have to let us vote. Let the people vote. It’s a minority and it’s a white minority state right now and so, what they have to do something simple, eliminate black voters. This new law takes it a new step, a new horrific step down backwards into the Jim Crow darkness.

Greg Palast:                          Okay. I mean, everyone’s heard I broke a story that part of the law is that if you give someone a slice of pizza or a bottle of water, which I witnessed these criminal activity by a Papa John’s pizza pushing gang in Georgia, it is a felony crime, I kid you not, to hand someone, a slice of pizza in a line. Now understand this is Georgia where it’s often pouring rain or, or humid horrid conditions. Why are the lines three, four, six hours long? For example, in Cobb County, they closed 6 of the 11 early voting stations, all 6 in African American neighborhoods. So of course, people then bunch up into the white districts that are left open for voting. The new law, the new law reduces the number of hours for early voting. This will make the election day lines longer. It also severely cuts back on dropboxes because, you know, the postal service has been a nightmare.

So people trying to mail in their ballots, mail them in, you just put them in a dropbox, which are by the way, watched 24/7 by cameras. They’re highly secured. No one’s ever said that there’s an illegal vote put in those boxes. But now they’ve it two things. They’ve reduced the number of boxes by about two-thirds in the big cities. That is, which means voters of color, the color being blue, by the way. And they’ve reduced the number of dropboxes. They reduced number of early voting hours, again, crushing the lines. And even more horrendous, they have now said that any voter and this has been unnoticed so far, Mike, any voter may challenge an unlimited number of other voters challenging their right to vote on whatever specious grounds they come up with. And this is not theoretical. In the 2020 election and then, and then, especially in the 2021 runoff for the US Senate, a group called true the vote, a tea party spinoff, true the vote challenged, are you ready for this, 364,000 voters. They challenged 364,000 voters right to vote, overwhelming.

Mike Papantonio:             So, so in the time, okay. In the time we got left, tell, tell, tell the viewers what that means. Do they stop them in line and say, you can’t? Tell us how this works and how it chills the process, if you would.

Greg Palast:                          Well, what they did was they came up with this cockamamie list and, you know, it used to be you could challenge a voter, but you had to know the voters. Say, oh, that guy doesn’t live here anymore or, you know, he was convicted of a felony or something. They, they removed that restriction. See the, the 346,000 challenges didn’t go through. But now the new law will permit it because you don’t have to know the voter. You just have to say, oh, we see that Jose Garcia that according to the post office, a Jose Garcia moved out of Georgia. Well, Jose Garcia is actually a common name, but not for Republicans. So this is the type of challenge that they’re mounting. We’re talking about a third of a million voters we expect them to challenge. The Republican party has joined in with true the vote on these challenges and they’ve been, and the challenges are now welcomed by the secretary of state of Georgia, Brad Raffensperger.

Greg Palast:                          Virtually every challenge, virtually every challenge was thrown out. That’s why they just changed the law. So we don’t know what’s going to, under the new law you can expect a third of a million voters are going to face the chop. And we saw the effectiveness, 340,000 voters were illegally removed just before the 2018 election in which Stacey Abrams supposedly lost to Brian Kemp. This will reactivate that Jim Crow ethnic cleansing of the voter rolls. Very serious stuff.

Greg Palast:                          That’s the second time. He, what he was trying to do is the governor was holding a signing of the bill, which is usually, you know, it’s a public event by, by law and tradition. They locked the door to the governor’s office and only allowed seven white guys to witness the signing of the bill, I kid you not. So an African-American said, I want to be there when this Jim Crow thing is his pen and they literally busted them. But understand, this is the second bust we have on camera from two years ago and Nikema Williams who is now Congresswoman Williams, she, there were protests against the theft of the election in 2018 in the Capitol, which was a legal demonstration, legal petitioning. And the cops started hustling, arresting people. So Nikema, the, her, the representative for her in the house in the Georgia house came down and said, look, these people are just trying to, you know, present the petition to me and they arrested her. She’s now in Congress. So this is, Georgia is a contact sport. Believe me. This is old stuff that keeps happening again and again.

Mike Papantonio:             Greg, listen, we, yeah, we appreciate that you’re out there. Thank you for following this story. We’ll follow it more with you as it develops. Thank you for joining me, Greg. Okay.