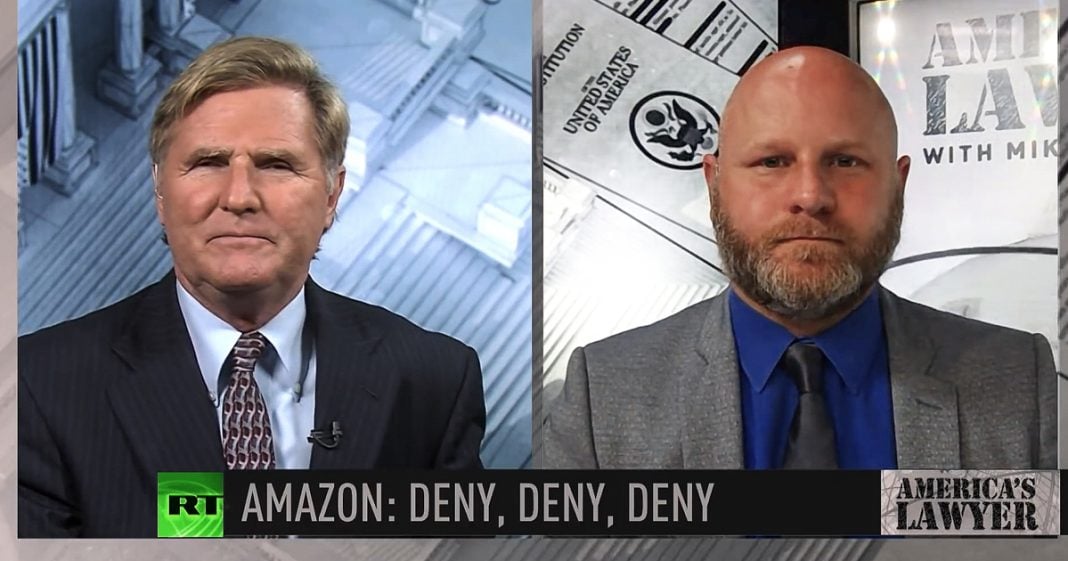 Mike Papantonio:             As Amazon tries to block the formation of a union in Alabama, more horror stories about how badly the company treats the workers have emerged. Joining me to talk about it is Farron Cousins from the trial lawyer magazine. Farron, as I look at this case, to me, you’re talking about a multi-multi billionaire who has built a, he’s built a company that really it’s going to take an awful lot to shake it up. It doesn’t take that much to give the employees the right to be able to use a restroom or to make a little more money. This, this is just something that’s, just the story’s getting uglier by the day the more we learn about Bezos. Don’t you agree?

Farron Cousins:                  Oh, absolutely. I mean, it’s, you know, what we’re learning right now is actually just more about the company’s dirty tricks, you know, not just with the, the attempt to unionize down there in Alabama, but just overall in general, what this company has been up to. First of all, they’ve got this army of online trolls right now, going around, trying to trash Bernie Sanders, trying to trash any Amazon critics. They’re posing as workers of Amazon, but they’ve all been basically exposed as these, you know, spam accounts that Amazon created behind the scenes. Jeff Bezos is furious about all the negative publicity that they’re getting, and he has ordered people to go out and do these things. Do these Twitter accounts. Work on the public relations angle, by trying to say things aren’t as bad as say, workers having to defecate in bags or pee into bottles. But we now know, thanks to great reporting from the interstep, Intercept, Ken Klippenstein, those are true. And Amazon knows that they have been treating their workers this poorly, that they’ve been forced to go to the bathroom in bottles and bags, because they have internal documents showing that they knew this was happening. So it’s all across the board, just horrible what they do.

Mike Papantonio:             Yeah. It’s not a legend anymore is your point. And it, it, when these stories first emerged, you know, you thought, okay, well, this is, this is an isolated incident here and there. But now you have drivers reporting that they always use bottles to, to relieve themselves and they, they have to leave the bottles on the truck throughout the day, just so they can take a break, a restroom break. You know, as, as I, as I think about this case, he’s probably spending millions to try to put his finger in a hole in the dike that’s getting ready to break, because once the unionization starts, it’s going to start throughout the country. So, I mean, don’t you just build around the inevitable and say, this is going to happen. Let’s go ahead and maybe I won’t make as many billions of dollars next year. Maybe I’ll lose, you know, a net worth of half a billion dollars. But don’t you just say, it’s time to do something and we have to rethink we’re doing?

Farron Cousins:                  Well, you would, I would. But, you know, we’re people that actually have a moral compass. I mean, we have to understand at this point, Jeff Bezos, what’s his net worth, I think $180 billion, the richest man on planet earth and he still doesn’t want to pay to give people an extra 10 minutes to go to the bathroom. We’re dealing with unfettered greed, the likes of which we have not seen in this country or, or on this planet ever. I mean, the, the amount of money he would have to pay just to give these workers decent benefits is absolutely minute compared to how much money he is hoarding. Like he’s, you know, the dragon from the Hobbit. I mean, that’s what we’re talking about here. That’s the kind of money this guy is hoarding away and he won’t pay to treat his workers fairly to give them decent benefits.

Mike Papantonio:             So he thinks that he can win the war in social media by having these Amazon trolls go on, you know, go on all the sites, whether it’s Twitter or Facebook, whatever, and, and just use that vehicle to turn this around. It’s not looking like that’s successful at all. As a matter of fact, now that people are finding out that he’s behind all this, that he’s spending millions of dollars hiring law firms to do dirty tricks, to go after people who are his critics, you know, that, that has a tendency to blow up in your face and it seems like that’s already happening. Has that just begun? Where do you see it, where do you see this going?

Farron Cousins:                  I, I really do think that this has just begun now and people are starting to pay more attention and that’s the best part of all of this. You know, people didn’t necessarily care so much when it was, oh, maybe they’ll get a union. Maybe they won’t. That’s kind of boring to the public. But once we see this multi-billionaire, richest guy on the planet, engaging in these tactics that other corporations do as well, by the way, suddenly it becomes an international story and people get a clear glimpse of what’s actually happening.