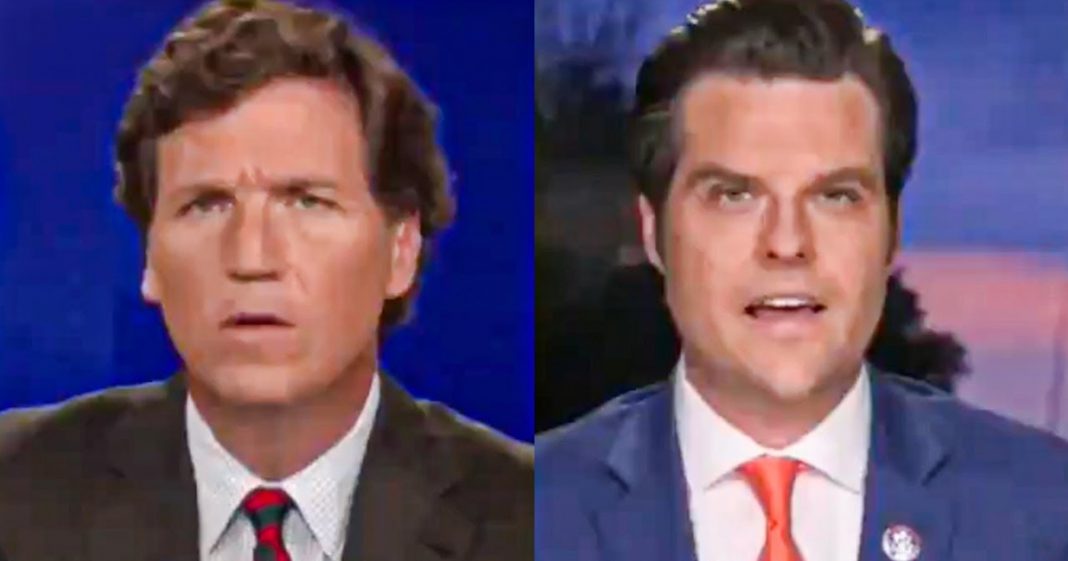 Republican Congressman Matt Gaetz was given the opportunity to go on Tucker Carlson’s Fox News program Tuesday evening to discuss the allegations against him, and that’s a move that Tucker likely already regrets. During the “weird” interview, as Tucker put it, Gaetz somehow managed to implicate Tucker by discussing a dinner they had where Gaetz brought “a girl” with him that he says was then threatened by the FBI. Ring of Fire’s Farron Cousins discusses the latest details of this case.

So last night, Tucker Carlson invited Matt Gaetz onto his program to help clear the air about the New York Times bombshell story about Matt Gaetz being investigated by the department of justice for possibly having sexual relations with a minor, essentially, and also traveling her across state lines and engaging in sexual activities with her there. So that would also qualify by definition as human trafficking. So Gaetz is in a lot of trouble and this investigation as we discussed last night, was started under Donald Trump’s DOJ, the Republican controlled department of justice, and it actually stemmed from an investigation into another Florida Republican Joel Greenberg, who was taken down for similar activities. So anyway, Gaetz goes on Tucker Carlson and Tucker Carlson is forced to sit there stone faced, not just through Gaetz’s ridiculous claims about what’s actually happening, but also as Gaetz seemed to implicate Tucker in the whole scheme. Here’s that clip.

Matt Gaetz:                           Again, I only know what I’ve read in the New York Times. I can say, that actually you and I went to dinner about two years ago, your wife was there and I brought a friend of mine. You’ll remember her. And she was actually threatened by the FBI, told that if she wouldn’t cop to the fact that somehow I was involved in some pay for play scheme, that she could face trouble. And so I do believe that there are people at the department of justice who are trying to smear me.

Love that. Tucker’s just sitting there like, did you really, did you really, really just tell the whole world that I went to dinner with you and this and this woman that is now in the FBI investigation? Now you got me and then, okay. Interview ends Tucker goes to break and when Tucker comes back, he admits that that was one of the weirdest interviews he’s ever done. Take a look at what happened during the little return that Tucker did here.

Tucker Carlson:                  If you just saw our Matt Gates interview, that was one of the weirdest interviews I’ve ever conducted. That story just appeared in the news a couple of hours ago and on the certainty that there’s always more than you read in the newspaper, we immediately called Matt Gaetz and asked him to come on and tell us more.

I’m sure it was weird. I’m sure it was weird to be implicated as at least a witness to some of Matt Gaetz activities here. So, so it is what it is. So Matt Gaetz has now offered multiple different explanations, by the way, as to why he’s under investigation. First, he had said that, hey look, yeah, he had given an ex-girlfriend some money and that’s what the FBI is investigating. Then of course it ballooned into this, no, my family is being extorted for $25 million. My dad was told to wear a wire. It’s, it’s crazy. They’re out to get us. We’ve, we’ve told the FBI it’s this rogue DOJ person trying to take us down. It’s deep state type stuff. And everybody’s like, yeah, dude, no, it’s not a partisan investigation. This actually was begun, was started under Donald Trump’s DOJ, under William Barr’s DOJ, dude.

Like you can’t make crap up like that. Not to mention the fact that if the FBI had in fact told your father, wear a wire, so you can get the extortionists, you know, on tape, you wouldn’t admit that publicly because that would ruin the FBI’s chances of getting this person on tape. You idiot. I mean, good God. Like this guy is so bad at crime. That’s why he always gets busted. That’s why the history of DUIs is out there because this guy is really, really bad at doing crime, but apparently he just can’t help himself now, can he? So multiple different defenses out there. He has now roped Tucker Carlson in as at least a witness. This story is going to get a lot weirder. Matt Gaetz is going to get a lot more desperate and it’s going to be one wild ride from start to finish.