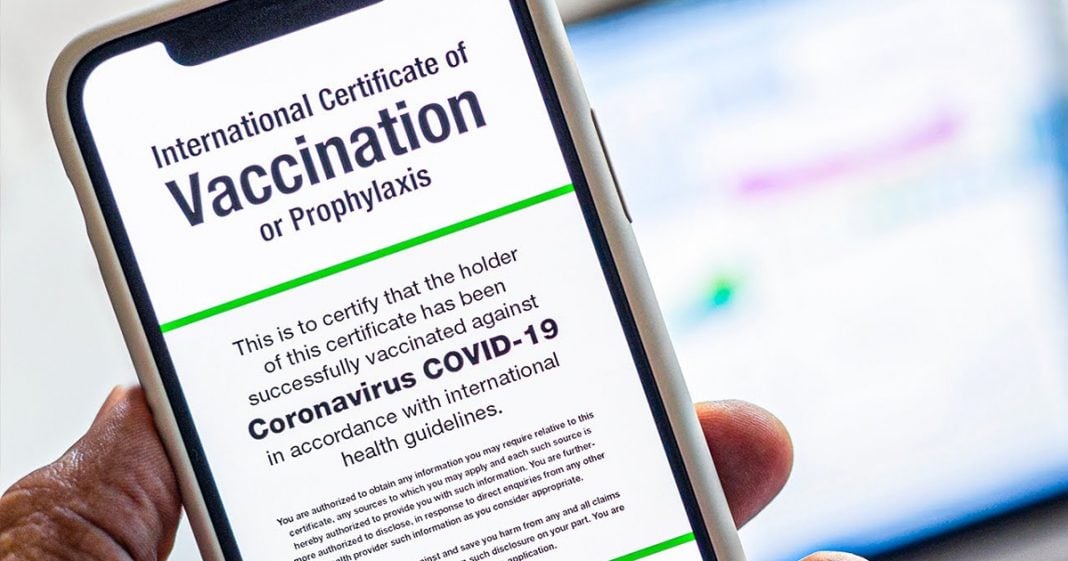 Republican politicians are trying to create a bit of faux-outrage over the idea of “vaccine passports” that would allow people who have been fully vaccinated to show their cards in order to be allowed to enter certain areas or enjoy a few aspects of pre-Covid life. And whlie conservatives are trying to drum up some outrage, experts are actually saying that the idea of these passports is actually smart, and it could help get more people immunized. Ring of Fire’s Farron Cousins discusses this.

Republicans are freaking out right now over something that really is no more than a idea at the moment. And that idea is vaccine passports, which basically would either be some kind of little card to show you’re vaccinated, which you actually get when you’re vaccinated. Perhaps an app on your phone, you know, something you’d be able to show people at an establishment so they could either let you into the restaurant, lets you into the theme park, lets you on the flight, whatever it is, the idea of vaccine passports to get people into places that they know are safe from COVID would help spur on economic growth. So Republicans are freaking out because obviously this is the exact same thing that the Nazis did, right? Or at least that’s what they want you to think. Those are the images that they’re putting around social media all week saying, well, this is going to be the next, papers please. They’re going to put a mark on you. They’re going to tattoo a number on your arm saying that you’ve got the vaccine.

These people are idiots. These are the kinds of people who will literally try to fight you on anything you say, because that’s all they know how to do. They don’t know how to come up with any good ideas of their own and that I guess gives them an inferiority complex to the point where they have to attack any idea from any other individual. Because we already have vaccine passports here in the United States. You want to enroll your child in public school or in a daycare? Public or private here in the United States. You got to show that they’ve been vaccinated. You want To attend a college here in the United States? You have to provide your immunization forms. That’s been life in this country for decades and decades and decades. And we do it not because we want to keep track of citizens and, ha ha, now we’ve got you. No, we do it to keep each other safe. We do it because we’re communities.

Sure we’re all individuals with individual rights. But we, we work together in communities. I don’t want to have to go to the it’s a society type way or argument, but communities, school is a community. College is a community, preschool. Certain jobs actually require you to be immunized. You know, if you want to go work in healthcare, you got to have it. So they have their vaccine passports because it protects their own communities and it prevents something horrible from happening. And here’s The kicker on this whole vaccine passport thing. The experts, medical experts, are actually now saying that’s actually a good idea because again, not only is it going to help, you know, re re-energize the economy because people will be able to go out and about again, might even be able to hang out in a bar without wearing a mask, but you gotta be vaccinated first.

And that’s the thing that the experts say would help is because then you suddenly get all these people with the, the FOMO, the fear of missing out and they say, all right, fine. I’ll go get the dang vaccine because all my friends get to go out. You know, they’re planning this trip to Vegas, they’re going to do all these great fun things. I can’t go because I don’t have the vaccine in me. So I’ll just do it. And then by doing that, they’re actually helping save people’s lives, right? We’re in a fourth wave right now, folks. We shouldn’t have ever gotten this far. We shouldn’t still be fighting with people over whether or not they even want to get the vaccine. And we sure as hell shouldn’t be listening to these idiotic Republican lawmakers who tell us that a vaccine passport is no different than Nazi Germany. Those are people who probably need to open up a history book and learn a little bit more about what happened in World War II.