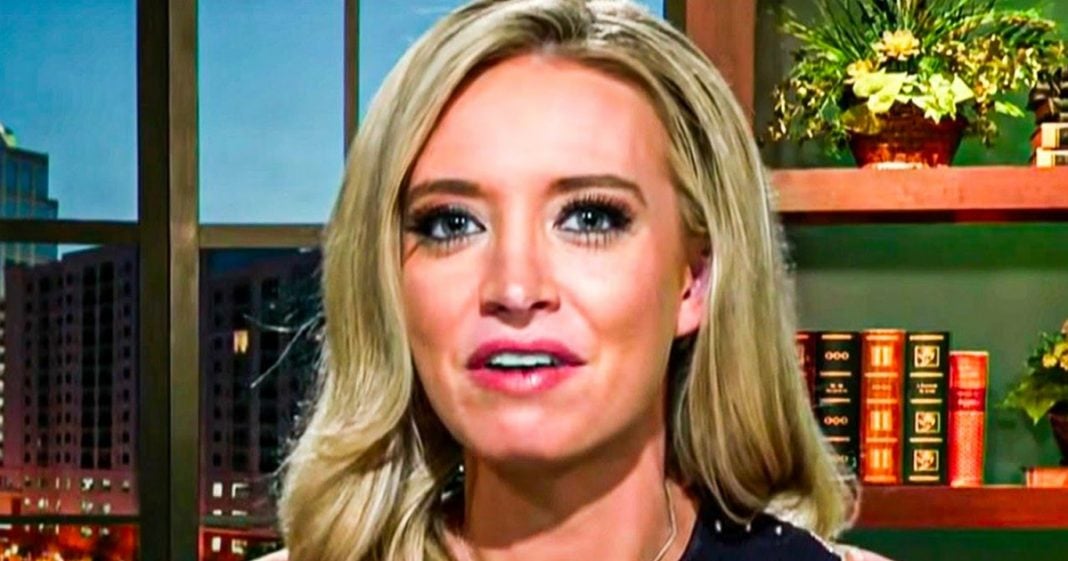 Kayleigh McEnany has only been at Fox News for a month, but in that short amount of time she has managed to impress the powers that be so much that she has now been promoted from contributor to co-host. McEnany’s time at Fox has been a nonstop festival of lies and falsehoods as she has attempted to completely rewrite the legacy of Donald Trump, and her new position will give her even more opportunities to spread non truths to her viewers. Ring of Fire’s Farron Cousins discusses this.

Fox news contributor Kayleigh McEnany has only been with the network for a month. She left the Trump administration, obviously when that administration ended, signed her contract with Fox news a couple days later. Officially started in February and now at the end of March, she has apparently impressed that network so much that they have already given her a promotion. Kayleigh McEnany is no longer a contributor to Fox news. She is in fact, now the cohost of the program out numbered. For those of you lucky enough to never have seen this program, they have usually, I think it’s four women and then one guy who gets to sit in the middle of the women as if he’s some kind of King, and they talk about some of the dumbest news stories of the day. No, not intentionally, by the way, they try to talk about real serious issues, but it’s Fox. So they talk about the stupidest things. They make stuff up and basically just sit there talking about things that they don’t know anything about. So that really is the perfect place for Kayleigh McEnany to go.

But in the month that she has been with this network, there have been countless articles, you know, countless fact checks on her and this woman cannot stop herself from lying. She has attempted to rewrite the Trump administration’s legacy on COVID-19 among many other issues, including immigration. Lying through her teeth about what actually happened while the Trump administration was in the white house about what they accomplished. And I guess that impressed the powers that be so much, they said, look at how well she lies. Let’s give her a promotion. She failed upwards because she is such a good liar. Here’s what it is. Kayleigh McEnany was a part of an administration and as horrible as she was at her job, just the by virtue of the fact, the fact of being the press secretary, she’s going to get privileges from this point forward. And that’s one of them, right? Fox news, I have to imagine thinks that hiring this woman in this capacity is going to somehow give them access. Not to mention the fact that the network also just announced that they’d hired Lara Trump, Eric’s wife. Oh, that’s going to give them access to all kinds of things.

So Lara Trump comes onto the network now, as a contributor. Kaylee McInerney gets promoted from contributor to full-time cohost. And part of me can’t help but think that this is because they’re getting some pretty serious competition from Newsmax and One America. See, that’s the other part of this. They have to get these people from Trump world, your McEnanys and of course your actual Trump’s, over to your network so that you can bring the Trump hardcore supporters back to your network.Trump supporters aren’t exactly happy with Fox news. They haven’t been for quite some time and they have been migrating over to Newsmax and One America. So Fox has to do what they think they have to do in order to bring those people back to remain the King of conservative talk and this is what they’ve gone with. Promoting the woman who is almost physically incapable of telling the truth and of course, hiring Eric Trump’s wife, just so they can have someone on their network with the last name of Trump. And the sickest part about all of this, it’s probably going to work in bringing back some of those disgruntled Trump supporters.