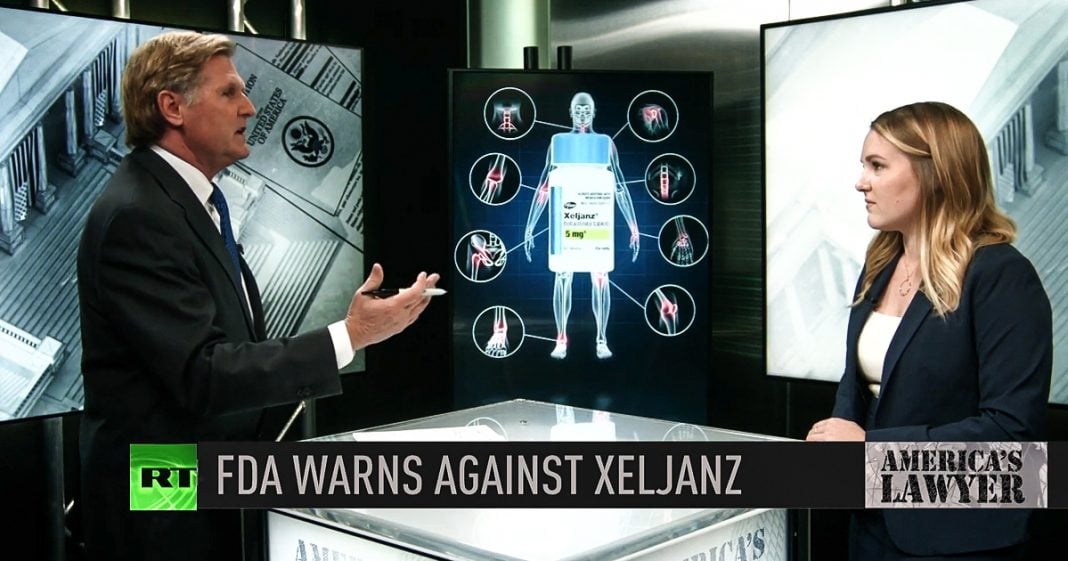 Via America’s Lawyer: Former media darling Andrew Cuomo is being urged by Democrats to resign after half a dozen women have come forward with sexual harassment allegations. RT correspondent Brigida Santos joins Mike Papantonio to bring us the latest. Plus, the FDA is again resorting to damage control, now warning the public about Xeljanz, a rheumatoid arthritis drug approved in 2012 that’s been linked to heart disease and cancer. Attorney Sara Papantonio joins Mike Papantonio to explain the dangerous results from recent safety trials.

Mike Papantonio:             New York governor Andrew Cuomo is facing calls to resign after allegations of sexual misconduct. The scandal comes on the heels of another misstep by Cuomo, the administrations involved coverup of COVID-19 deaths at nursing homes, along with all the other allegations coming out right now. Brigida Santos joins me to talk about it. Brigida, this is such a classic story. You see it develop, you see, always see it develop, you know, out of tribalism, you know, whether it’s the Republicans trying to make a hero out of a zero with their folks or the Democrats trying to create a hero where there is none. That’s what happened here. Didn’t it? I mean, you had Hollywood just gushing over Andrew Cuomo, what a wonderful guy, he’s, run him for president. Don’t you remember all these boneheads on TV doing that? And the Republicans do the same thing. I mean, it’s, it’s, it’s almost, it’s almost black comedy to me. How many women have accused the governor of sexual harassment at this point, Brigida?

Brigida Santos:                   Well, so far, at least six women have accused governor Andrew Cuomo of sexual misconduct, including unwanted physical advances, harassment and bullying. New York attorney general Letitia James has now appointed two lawyers to lead an independent investigation into the allegations and as part of that investigation this week, former staffer Charlotte Bennett, told investigators that the governor acted inappropriately toward her on multiple occasions and created a sexually hostile work environment at his offices in Manhattan and Albany. She also accuses his senior staff of creating a culture of fear, abuse and secrecy, and says that investigators should also focus on that aspect. Now, the allegations against the governor by various women range from groping to inviting them to play strip poker and asking them questions about sleeping with an older man. And of course, as you said, the media has really hyped up Cuomo to be the anti-Trump and in the end, it turns out that he might be just like Trump.

Mike Papantonio:             I mean, they look like idiots. I mean, you got, I mean the whole Hollywood thing really gets me. And then this list of people who are now turning against him, half of this list were his cheerleaders. They were, there was hero worship. It was, he is a Democrat. He is who we stand for. We see the Republicans do the same thing. It is almost sick, laughable material as you have to watch it play itself out, but now it’s playing itself out. How has the Democratic establishment responded to the allegations? I can imagine, but tell me anyway.

Brigida Santos:                   Yeah. Well, more than 50 Democratic state lawmakers are now calling for governor Cuomo to resign. President Biden has also said that the governor should resign if those allegations turn out to be true. The New York assembly speaker has also now authorized an impeachment investigation into the sexual harassment allegations. If articles of impeachment are introduced, the state assembly has legal authority under new York’s constitution to impeach the governor with a simple majority vote. And if he’s impeached, Cuomo will have to step aside and allow the state’s Lieutenant governor to act in his place until the impeachment trial is over. The trial would be held by the Senate’s state Senate and the seven judges of New York’s court of appeals, but to convict and remove Cuomo from office, a two thirds majority vote is necessary. This sounds familiar and of course, that is unlikely with the current political makeup of New York’s legislature. This is a long shot, but even without a conviction, an impeachment charge could still hurt Cuomo’s political career.

Mike Papantonio:             Oh, he, the guy needs to be impeached. Look, this is not the first rodeo for Cuomo. He has this reputation as being a disgusting bully. Anybody who disagrees with him, he’s going to get rid of them. He’s going to ruin their career. He’s gonna, you know, cause them all type of harassment. This guy is a thug and to, the idea that we created this hero, we’re going to run him for president because why? Well, I don’t know why, because somebody jumps on the train. The Cuomo administration is also under investigations for its COVID handling, the nursing home lies, where he lied about 10,000 deaths. Tried to make it look like the deaths didn’t take place. Tell us about that.

Brigida Santos:                   Yeah. Governor Cuomo’s office has also been accused of deliberately withholding data about COVID-19 nursing home deaths from the public and from state lawmakers, and also of under-reporting fatalities by as high as 50%. That’s according to a report by the New York attorney general. In addition to facing those state investigations into alleged sexual misconduct, Cuomo is now also facing a federal inquiry into whether his Coronavirus taskforce purposely manipulated data about COVID-19 deaths in those long-term care facilities. So this guy is mired in scandals.