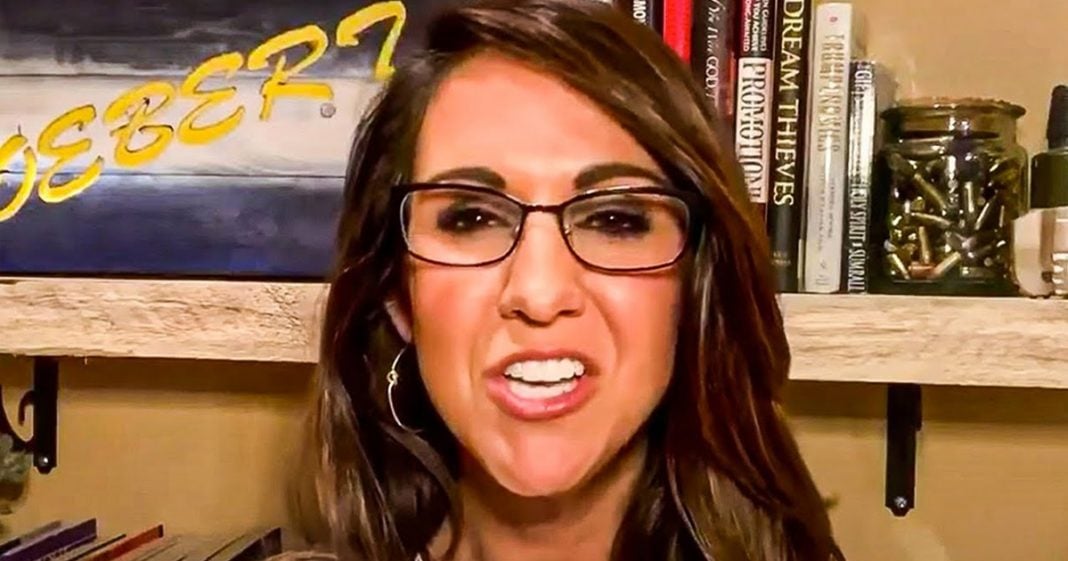 While most of us have been disgusted by the actions of lawmakers like Lauren Boebert – who insists on doing interviews in front of a wall of guns – the people who put her in office are absolutely loving it. They believe that this shows that she is a strong supporter of the 2nd Amendment, and that resonates all-too-well with the people who will continue to vote for her in the future. Ring of Fire’s Farron Cousins explains what Democrats need to understand about people like Boebert, and more importantly, about the people who put her in Congress.

Recently Republican representative Lauren Boebert once again came under scrutiny for airing an ad where she talked about how horrible Nancy Pelosi is and then she ended the ad with the sound of a gunshot. This of course came after multiple different interviews that Boebert’s been given over the last few weeks where she sits in front of a background filled with just guns and ammunition, looking like something from Al-Qaeda, which is exactly what they do, by the way. And we, the normal rational people out here in the United States who don’t live in her district, see this as totally nutso. Like there’s something wrong with her. This is psychotic. But there’s a problem with that line of thinking and the problem with thinking that way is that her own constituents don’t think that way. Her constituents, according to recent reports, actually love this. They like that she is like this.

Here’s a couple of quotes from people from a recent report here. I think she’s just part of that mentality that the Glock is inexpensive, lightweight, easy to service and there are a lot of accessories for it. The accessory market in the aftermarket parts for the Glocks are enormous. Okay. Well that guy’s obviously trying to sell some more guns, because he’s a gunsmith, but he supports what she’s doing. I feel like she’s my voice when I didn’t feel like I had one, according to Jamie Cure, a third grade teacher from Glenwood Springs, she’s ignited me to be proud to be American again. Be, because she’s because she’s sitting in front of guns? Looking like Osama bin Laden’s wife, basically with that backdrop. Really, that makes you proud to be an American? Here’s another one. When I heard about some of the messaging that she was putting out on social media, I felt as a local representative, that she was not really representing her constituents, but it turns out that she was. That’s the terrifying part about all of this.

We look at this and we groan. We look at this and we see an unstable human being. The people who put her in office look at this and they see a hero all because of the guns. Now that alone tells you a lot about what’s wrong with the United States in general, right? Just because a woman says I have guns and she shows you, I have guns, you say, well, then you should be making laws. No that’s idiotic. But at the same time, it represents a failure, believe it or not, again, of the Democratic party. The Democratic party, and most Americans, by the way, want to enact gun control measures that in no way include coming and confiscating your firearms, as the Republicans tell you. They want common sense gun reform so that crazy people don’t end up with their hands on guns and commit atrocious acts. But Republicans have weaponized that and Republicans have turned it into something it’s not. And so none of the other issues matter to these voters. They could be living in absolute economic squalor. They could be struggling to make ends meet.

They could be watching their government benefits, unemployment, Medicaid, whatever it is, go down the drains because of people like Boebert, but they’re still gonna support them because of that one issue and that one issue is guns. This country is sick. It has a sickness that we need to address and again, it’s on the Democrats to address it. They have to go to these areas and they have to show people that, hey, there is a world outside of guns because nobody’s stopping you from going out and buying a new Glock. Meanwhile, you do have a party that is legitimately stopping you from being able to survive economically. You have a choice to make voters, please, for the sake of the country, make the right one. That’s the sales pitch the Democrats need to be making in these areas. But unfortunately, I feel like there’s far too many of these areas that Repub, Democrats, excuse me, have just written off because they don’t think they can get through to these people. I know the examples I just read seem extreme, but believe it or not, some of these people are absolutely reachable if somebody makes the effort.