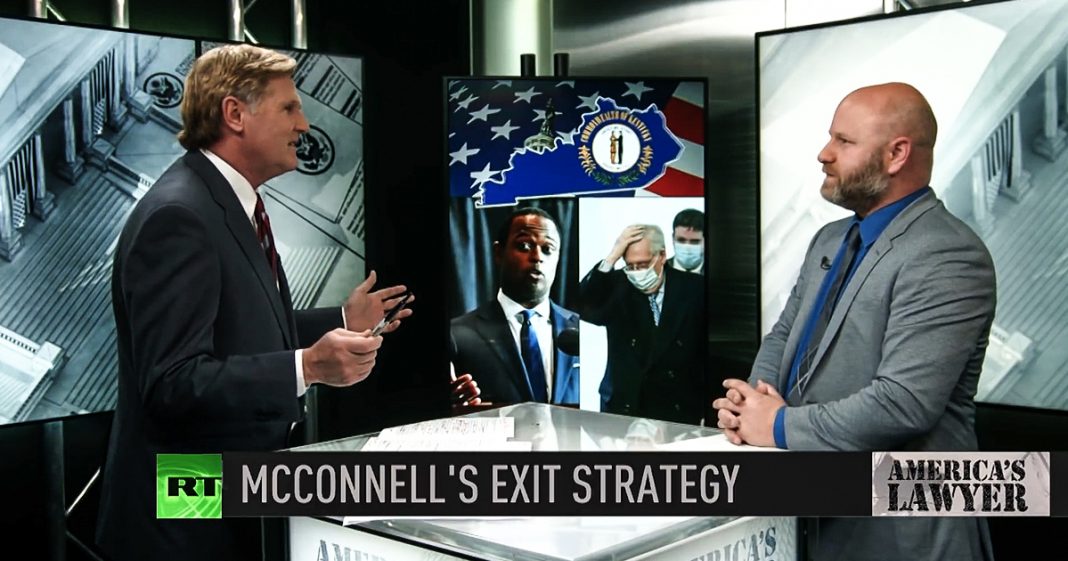 Via America’s Lawyer: Senate Minority Leader Mitch McConnell vets possible Senate successors in the event he doesn’t finish out the remainder of his term. Also, President Biden’s glaring absence from press events since taking office has many concerned he isn’t up to the task of delivering public addresses. Mike Papantonio & Farron Cousins discuss more.

Mike Papantonio:             President Biden has not held a single press conference in the past seven weeks and increasing speculation that he’s not up to the task. You know, as I look at this story, I don’t think it’s Biden that is choosing not to do this. It’s his handlers, you know, the, he’s surrounded by the handlers. This guy has been around for a long time. He understands politics. You know, yeah, does he stumble? Yes. Does he say crazy things? Yes. Do you watch him and say, my God, I wish you hadn’t done that? But look, he’s been around a long time. He could operate at half capacity and still understand the program more than most of the leadership in the Democratic party. What is your take on this?

Farron Cousins:                  Absolutely. But, but it really, you know, you kind of have to weigh the cost benefit here. If he goes out there and he says something and he stumbles and forgets somebody’s name or their department, conservative media has a field day with it.

Farron Cousins:                  But then again, you hide them away for seven weeks and don’t let them talk to anybody, they go after that as well. So you’re in a lose, lose situation and I think the one that you want to lose is the theory that you’re hiding him.

Farron Cousins:                  You do need to bring him out to the public. You need to let him talk and like you said, he’s going to say stupid things. That’s what Joe Biden did all throughout the campaign. But the more you hide him, the worse it looks on the Democrats.

Mike Papantonio:             Don’t you think the average American understands. It’s not him making all the decisions. He has people to do that. Look, you know, I’ve heard, last, in just the last few days, I go, my God, what is he saying? Why can’t he remember? Why, and it’s a memory problem, he literally couldn’t remember the name of the Pentagon. He couldn’t remember the attorney general, but at, but at the same time, he’s been around a long time. He does understand the program and his handlers certainly aren’t going to save him. Put him in front of a camera. Let him be Joe Biden. My take.

Farron Cousins:                  Well, you know, we’ve got a lot, as you’ve already pointed out, a lot of aging people in leadership in Washington, DC, Republicans and Democrats. On the Democratic side though, you have a lot of people that are pushing 80, some even over 80.

Farron Cousins:                  Pelosi, who gave that weird interview a few months ago. Remember the good morning, Sunday morning. She had no idea what was happening. Dianne Feinstein, reports are coming out that half the time she didn’t know where the hell she was.

Mike Papantonio:             They’re really serious. The Pelosi reports, ah, you know, they had one where it looked like she was either drunk or she was just completely stroking out. But when they went back and looked at it and it’s somebody that had doctored the film. Feinstein, not the case.

Farron Cousins:                  Well, and there’s been reports from pharmacists who haven’t named names, but they have said in Washington, DC, they have filled dementia and other, you know, mental prescriptions.

Farron Cousins:                  I don’t know how, exactly how to say that, but for members of Congress, you know, basically admitting that there’s plenty of them that do have some kind of severe cognitive decline, Alzheimer medication. That’s what it was.

Farron Cousins:                  That’s what he was filling. So, you know, it’s a, it’s a real problem and it does create speculation, but it also shows that we have to do something better than just putting these 80 year olds in charge of the country all the time.

Mike Papantonio:             Move over. It’s like we do with our law firm. You know, at some point I’m not going to be trying as many cases as I try. So I say, I try to get the younger lawyers ready to do that. Any business should do that, but, again, it comes back. I don’t think we look at Biden and he’s stumbling all around and say, oh my God, all is lost. He’s Joe Biden. He can operate at half, half speed and still do a better job than most of these folks who’ve been around a long time. And he’s surrounding himself, I’m not so sure about the rest of them though. We got to look at the aging as a big issue.