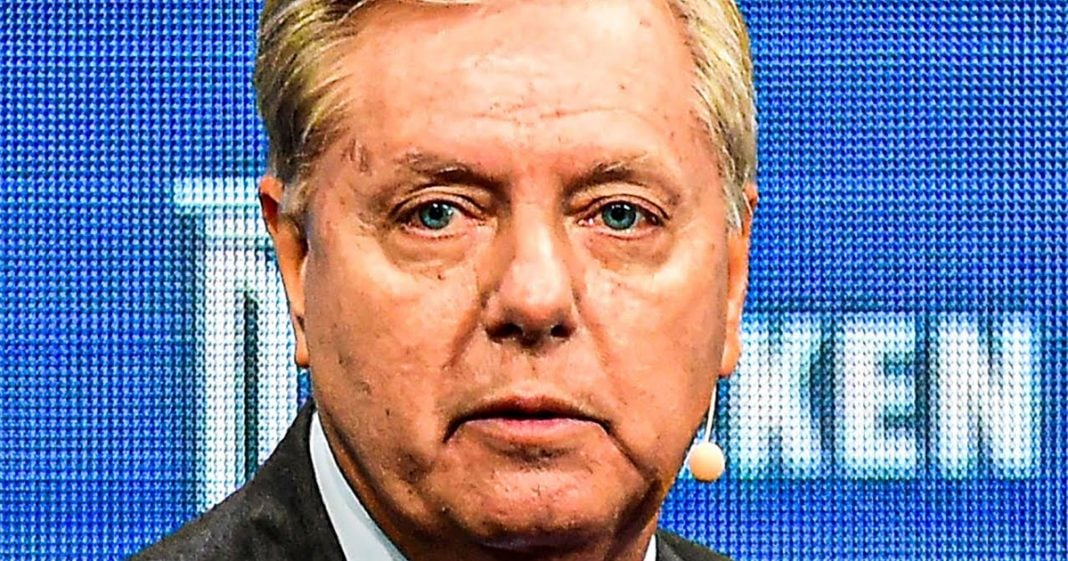 Republican Senator Lindsey Graham wants the country to know that he is afraid of children. During a recent appearance on Fox News, Graham warned that if we continue to allow migrant children to come into the country, some of them could eventually become “terrorists.” Graham might be confusing migrant children for the Republican Party’s base – the people who actually engaged in acts of domestic terrorism by storming the U.S. Capitol building. Ring of Fire’s Farron Cousins discusses this.

Republican Senator Lindsey Graham understands that he doesn’t have a whole heck of a lot to attack Joe Biden about. So what he’s trying to do instead is kind of carry on Donald Trump’s legacy and that’s a disgusting legacy. Nobody should want to carry it on, but Lindsey Graham’s a disgusting character, and he is more than willing to do it. On a recent appearance on Sean Hannity’s program on Fox news, Lindsey Graham warned about all these migrant children coming across the border, warning that they were going to become the terrorists of tomorrow. Here is what Lindsey Graham had to say. He said, people are coming by the thousands. There’ll be coming by the hundreds of thousands by the summer. It’s a humanitarian crisis and eventually it’s going to be a national security crisis because they’re children today, but they could easily be terrorists tomorrow. So I’m not sure if Lindsey Graham is trying to say that, yeah, today it’s children, tomorrow it could be terrorists coming across the border. Or if he’s saying these children are coming over here, they’re going to be radicalized and they’re going to become terrorists.

You know, one day they’re here as children, next day, I don’t know. Maybe they’re storming the Capitol in horned helmets and face paint waving Confederate flags. Oh, I’m sorry. I’m sorry. Those were the Republican terrorists from the January 6th insurrection, Lindsey. Remember that? Remember when, when your supporters, your base, the people you like for the guy that you defend relentlessly, when they stormed the US Capitol. Yeah, those were homegrown terrorists. Those are the people that the FBI is worried about. Those are the people that the CIA is worried about. Those are the people that the Pentagon tells us are consistently the greatest threat to our way of life here in the United States. And here you are being given a massive platform on Sean Hannity’s hate hour to spread more bigotry against these children. That’s what this is. This is, this is hate. This is Lindsey Graham dog whistling with a bull horn, to be honest, by trying to tell people that these little children, these non-white children, can you really trust them? Do we know their motives?

I mean, yeah, they’re children today watching Sesame Street and you know, learning how to count. But soon they could be strapping on suicide bombs, I guess is what Lindsey Graham wants us to believe. Listen, these individuals coming across the border, as Lindsey Graham said, it is a humanitarian crisis, but not, not for us here in the United States. They’re coming from humanitarian crises. And as human beings, not even as Americans, but as human beings, we should help them. We should do whatever we can with our power to welcome them, to help them, to give them a better life. We shouldn’t be locking them in cages. We shouldn’t be putting them in migrant detention facilities, no matter how nice they are under Biden as his defenders like to say. We shouldn’t be teaching people to hate, these children or grownups or whoever it is. If ICE, if the CBP actually did their jobs, Lindsey, we wouldn’t have to worry about them letting terrorists through, now would we? But apparently you have as little faith in them as the rest of America. So maybe it’s time we abolish ICE because if, as you say, they could be letting terrorists in, what’s the point in having that organization exist anymore?