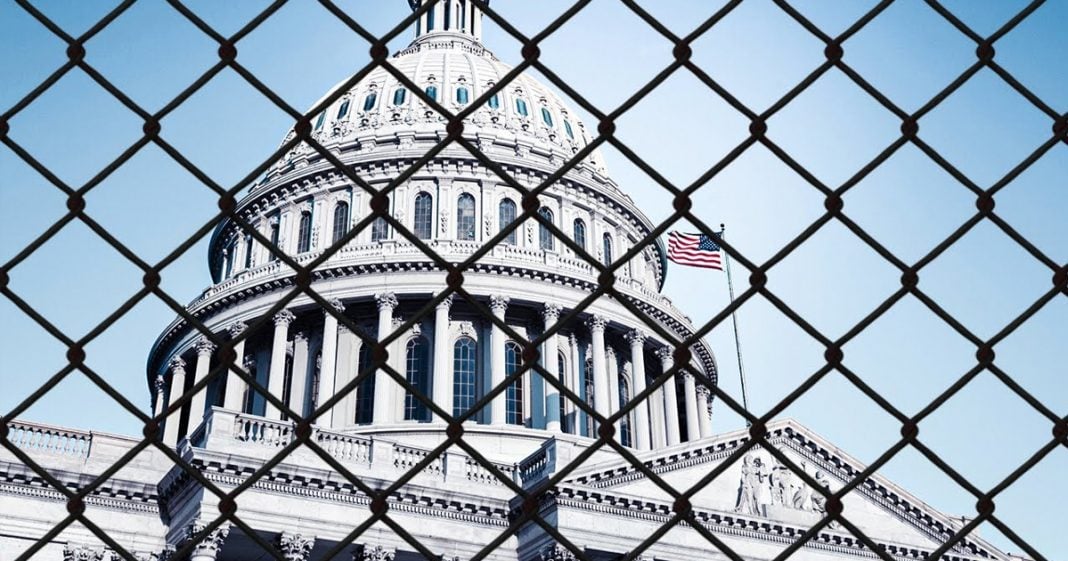 Nearly two-thirds of Americans are tired of both Republicans and Democrats NOT working for them, and they believe that a third party is needed. While there are plenty of smaller parties available for voters to choose from, the real problem is that the system is rigged against these parties to maintain the power of the two big ones. We have fallen into a trap that is nearly impossible to escape, as Ring of Fire’s Farron Cousins explains.

It’s no secret here in the United States that our two party system simply doesn’t cut it anymore. You know, every American citizen, essentially, based on the way things are right now, has to shoe horn themselves into one of two groups, a Democrat or a Republican. Now there are plenty of third parties out there. The two most popular, obviously being the green party and the libertarian party, but over the last, you know, 10 years, both of these groups, the green party especially, because they had more power, have lost tremendous power across the country. Losing seats at the state level, losing, you know, what little they had at the federal level. These parties are actually diminishing in power while the two major parties are consolidating it. And according to a new poll, 62% of Americans say that neither the Republicans or Democrats have their best interests at heart anymore.

Neither are working for the people and so 62% say we need a third party. And I would expand that to say, we don’t need a third party, we need more third parties, because again, you cannot shoe horn yourself. I’m sure some people can, right, the, the real diehard tribalist’s. I don’t fit in with a lot of what the Democratic party stands for these days. I don’t fit in with anything the Republican party stands for. Honestly, my views are more in line with the green party. I’m in a closed primary state. So if I want to have a say in who at least the Democratic nominee is going to be, I have to be a registered Democrat. Now there was a time by the way, many, many years ago where I actually defended the closed primary system. Uh, I regret that entire stance, over the years, I’ve realized that that is completely wrong.

Every primary should be open. So just as a matter of clarification, I know I had said that. I disagree with my past self on that. I’ve evolved on this issue and third-parties are, are vital and again, as this poll shows, most people think that this might actually be the only way to save democracy. The experts, political scientists out there are telling us we need more parties and the reason for that is quite simple. When you have this two party duopoly, it’s a constant back and forth, you know, a ping pong match, Democrats, Republicans. Then Democrats, Republicans, holding power, alternating turns, neither working for the people as the majority of people say. So what if we had a better option? What if we had four or five major political parties that better represented Americans? What if instead of having Democrats on one side of the House and Republicans on the other, there were multiple different areas where you had 30 members of a green party, five members of a libertarian party, 50 members of a labor party, suddenly that Congress becomes far more representative of the individual needs and desires of the American public.

The public is actually on board with this and that’s probably why as demonstrated in HR 1 that actually punishes, makes it harder for third parties to get on a ballot, that’s why both parties have finally come together and said, we got to do something about this. They understand that their days could be numbered. They understand the public is no longer on their side, so we have to get loud. But the third parties also have to get better organized. You can’t just throw a person nobody’s ever heard of and say, this is our candidate for president. Cool. Maybe start at the ground level, start winning local offices, start getting people in your community talking about this third party and realizing that it’s not a bunch of loons. Because honestly that’s kind of the position people have about these third parties. Oh, you’re not a Democrat or Republican?

That’s weird. Teach them that it’s okay. Teach them that these other parties can be just as good and just as effective and just as victorious. But you have to start at the local level. You have to build that support before you can possibly even take that big prize of the presidency. That’s what has to happen and unfortunately, far too few of these third parties are able to do that. So they do need help. If you’re watching this, if you are considering a run for office, take a look at third parties. Take a look at what is going on with these two major parties and the dissatisfaction that the public has for them and capitalize on that by offering them something better. If that does not happen, we’re stuck with the duopoly for now.