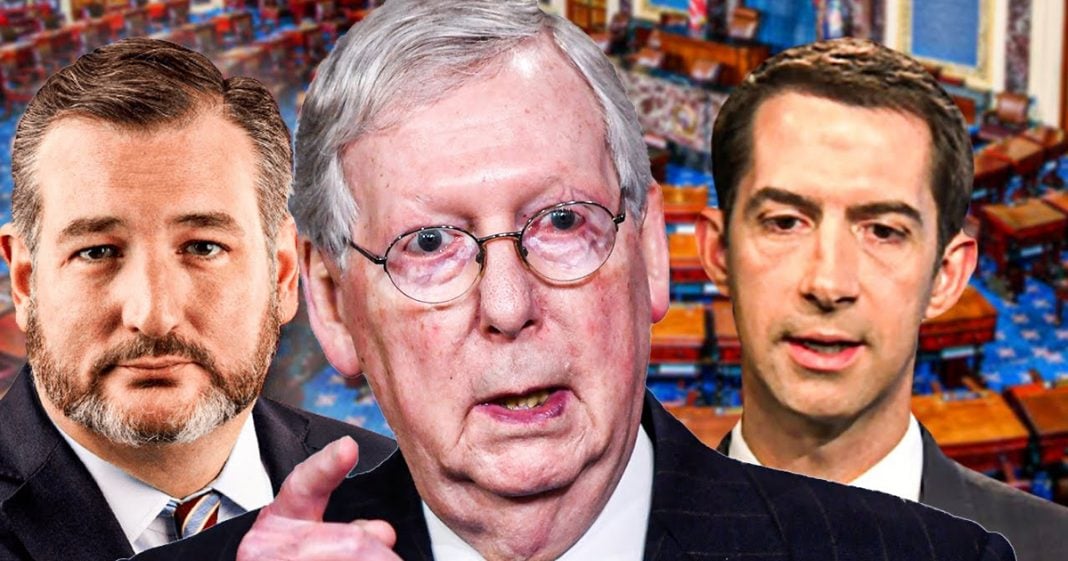 Republican politicians were united in their opposition to the $1.9 trillion COVID relief package, arguing that it was too costly. But they have absolutely no problem with a $1.5 trillion plan to upgrade nuclear weapons in the United States. The truth is that there is always money available for projects that politicians like, but when it comes to helping Americans, the piggy bank is almost always empty. Ring of Fire’s Farron Cousins discusses this.

For weeks now, even after the latest round of COVID stimulus passed, Republicans have been telling us it’s just too gosh darn expensive and provides too much money for the American public and sure, has a lofty price tag. Right? $1.9 trillion. But remarkably that happens to be the same price tag as the tax cuts that Republicans passed towards the end of 2017 and of course they had no qualms about passing that, but there’s another pressing issue that all of the hand ringers over how much money things cost seem to be completely silent about. And that is the fact that over the next couple years, a continuation of a policy from the Trump era that is continuing under the old, Biden era, excuse me, um, is that we’re about to spend $1.5 trillion in the next couple of years, upgrading our nuclear arsenal here in the United States. Republicans are silent about that cost.

Democrats are silent about that cost. And I think we, the people, the public, the individuals, the citizens, constituency of the United States should be making a big stink about this. After all, these are weapons that we’re building to hopefully never use by the way, according to the government. Right? We, we’re just having them for the, for the sake of having them. We have them because, because other people have them and they don’t want to use theirs and we don’t want to use ours. But we have to have ours in case they use theirs. So we’re going to spend one and a half trillion dollars on this program that we’re praying we never have to use. Yeah, I’m not saying I want them to use nuclear weapons. What I’m saying and what most Americans should be saying is that we don’t want you to spend this money on stupid programs that aren’t even necessary.

We already have more nukes than anybody else. Every now and then Russia climbs ahead and I think they recently did actually go ahead of us. And that’s why we want to have more nukes and better nukes and bigger nukes and more powerful nukes and more technologically advanced nukes, whatever it is. It’s stupid. We are putting ourselves in a position where we never have money when the public needs it or when we need to fund public schools or when we need to invest in infrastructure or when we need to give desperate Americans a check so they can survive for another month. There’s never enough money for that. But by God, the military industrial complex, whenever they need a couple dollars, we’ve got all of Congress, both sides by the way, this is not just a Republican issue, both sides digging through their couch cushions, trying to find every piece of change to deliver to weapons manufacturers.

This system is not sustainable. This system is going to crush the United States. We cannot continue to survive if we spend all of our money as a country being afraid of other countries, because at the heart of it, that’s what all this is about. That’s what all of this is about. That’s what the entire military industrial contract, complex, feeds upon, our fear. Oh, what if they, well, we can’t let that happen. So let’s get more tanks and jets. Oh, but this country over here. Nope. Don’t worry about it. We’ve got brand new nukes to handle that. Nobody can touch us. We are safe and sound and secure in our own little American bunker. Nobody can get to us. We’re afraid and in the meantime, that fear is costing us hundreds of billions of dollars every year, while far too many Americans live on the streets, struggle with addiction, struggle with health issues and struggle to get by from paycheck to paycheck. Imagine what we could do with that money if we didn’t spend all of our time being afraid.