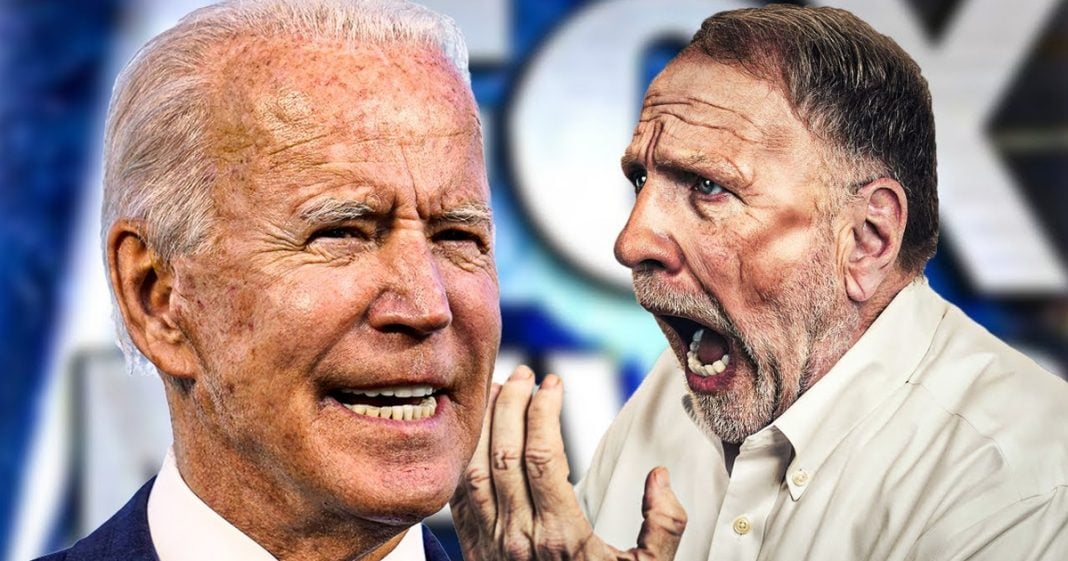 Fox News is doing everything they can to create mini scandals surrounding Joe Biden, but so far none of them have resonated with their viewers. Republican operatives are growing increasingly angry at the network for their failure to generate outrage against Biden, but the truth is that Republicans really have nothing to be outraged about right now. If Fox can’t sell division, then they have nothing to sell, as Ring of Fire’s Farron Cousins explains.

During a recent video here on Ring of Fire, that was actually a members only video, I talked about the fact that so far Biden has been a very boring president and it turns out that not long after I did that segment, a story came out talking about the fact that Republican operatives, Republican consultants, are growing angry with Fox news because they aren’t doing enough, apparently, to drive out rage about president Biden. And by golly, that makes the job of these Republican operatives, the Republican consultants, a heck of a lot harder, because what they need is Fox news to go out there and get the public to openly hate Joe Biden. But so far the few attacks that Fox news has leveled, according to these Republican strategists, they’re not resonating with the public because the public doesn’t seem to care. One of these Republican strategists, man by the name, by the name of Alex Conant, actually said that Fox news ended up spending more time talking about Dr. Seuss than they did Biden’s stimulus bill, which they thought of course they could get Republicans angry about.

But turns out majority of Republicans supported it. So nothing that they’re trying to use to attack Joe Biden right now is resonating with their audience and so Fox news has kind of pulled back a little. They’re, they’re not necessarily going after Biden as hard as they did Obama. You know, I wonder what the difference is between those two men? I mean, if you had a picture side by side of Biden and Obama, what would be the, what would be the difference there? I mean, it’s, it’s not like it’s that black and white, ah, there it is. If you don’t think this has something to do with skin color, the fact that Fox can’t gin up the same kind of hatred for Biden that they did Obama, then you are kidding yourselves. Fox news attacked Obama for literally the kind of mustard he ate, for wearing a tan suit, for eating salads with arugula. And what they were doing was trying to off poor white people saying, look how high on the hog this black man is living. That is what happened. Little harder to do when it’s a white man, because they’re white.

They don’t want to hate one of their own. It always with Fox news comes back to hatred of the others, whether it’s immigrants, which they ginned up a lot of hate for that under Donald Trump. But uh-oh, they’re not having as much success under Biden because it turns out we’ve now tripled our capacity. Tripled the number of migrant children we have locked away. So he’s actually locking away more than Donald Trump did. So they can’t be about that. He’s bombed a middle Eastern country already. Republicans like that, so they’re not going to be mad about that. So golly, there’s nothing right now. Oh, they’ll think of something, you know, I’m surprised they didn’t spend days and days and days talking about the fact that Biden’s dog bit somebody. You’d better believe if Obama’s dog had bitten somebody while in the White House, that dog would have been impeached. I don’t know how they would have done it, but I promise you they would have impeached Obama’s dog. But the difference truly is black and white and these Republican operatives know that. They also know they can’t say it out loud.