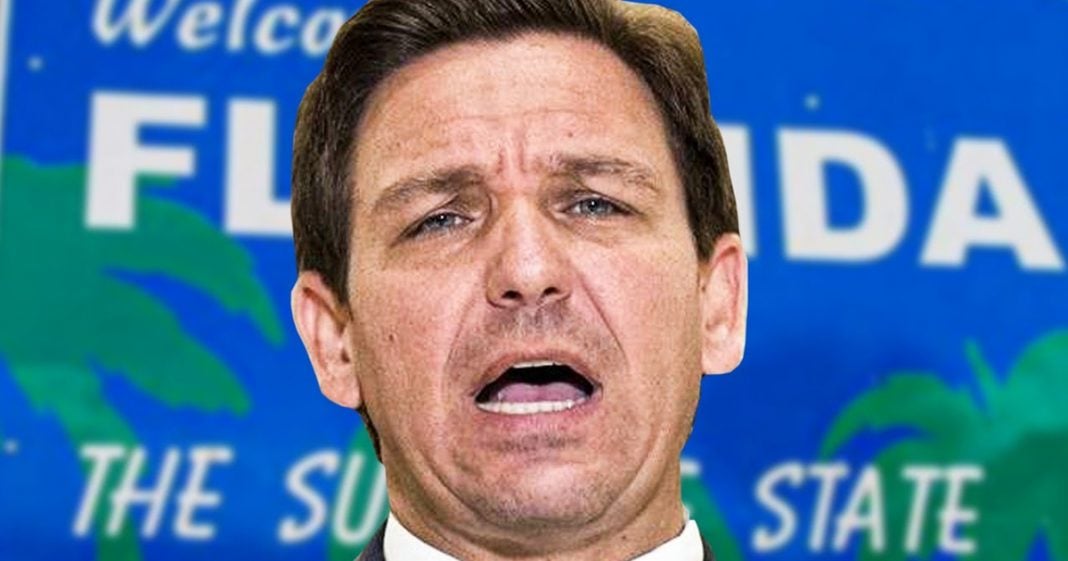 Republicans in the state of Florida are willing to spend billions of dollars to fight the effects of climate change, but they refuse to actually address the causes of climate change. They are bailing water out of a sinking boat without trying to plug the hole. The state stands to lose significant landmass as sea levels rise, and there are already plenty of areas in the state that are already seeing climate change in action. Ring of Fire’s Farron Cousins explains what’s happening.

Republicans in the state of Florida understand that climate change is a huge threat to our way of life down here in the sunshine state. That seems like a weird statement to make, right? Because we’re represented by a bunch of climate change deniers. The truth is, most of these Republicans who deny climate change, don’t actually believe what they’re selling. They use that as a way to get more donations from industries that continue to pollute and of course, to hoodwink the public just because I guess that’s fun for them. But our legislature here in the state of Florida recently agreed to spend $100 million per year to combat the effects of climate change. And furthermore, they have also passed a law that refuses state funding for development projects that do not take rising sea levels into account. That’s pretty awesome. That means Florida is leading the charge on, on tackling climate change, right?

No, unfortunately all of these measures and all of the money that Florida is willing to spend on this, are only for mitigation, they’re not actually going to do anything about pollution. They’re not going to crack down on emissions. They’re not going to call for reductions, call for increases in solar energy or even hydro-power here in the state that’s bordered by water and we could make it happen. But nah, none of that, no. We’re just going to pay a hundred million dollars a year to help the areas of the state that are already seeing the effects of rising sea levels. Miami is a wonderful example. We’ve been talking about it for years here on Ring of Fire. The fact that Miami is starting to experience more and more of what they call the king tides each year and that is essentially a high tide that’s higher than usual.

And every year, those king tide seem to get a little bit higher, washing away roads down in South Florida, that constantly have to be rebuilt. But God forbid we address the root cause of it, right? We have a Republican controlled state that publicly denies that climate change is real. Republican controlled state that is spending a hundred million dollars a year on the effects of climate change and they understand that this is from climate change. Yet they still refuse to address the root cause of it, right? It’s like we’re in a sinking ship down here in Florida. There’s a big hole in our ship and water’s pouring out. I they’ve decided to take a bucket and we’re going to start bailing the water out instead of taking a big plug and fixing the hole. That’s how futile their attempts at controlling the sea are going to be. They, they, they legitimately think you could just stop the sea from rising if you just put some sandbags up. Or what if we built the houses on even higher pilings? Because those are things that are happening, folks.

Those are legitimate things that our government is wasting money on down here in Florida. Instead of saying, you know what, now what if we reduced emissions? And obviously just Florida reducing emissions, isn’t going to do this, but this is the Republican way of thought all throughout the United States. Yeah, we’ll pay to fix the problems. I mean, Louisiana is another great example. You’ve got islands out there that people live on that are going to be underwater in just a couple years. They’ve been sinking essentially because of rising sea level, not actually sinking, sea levels going up, for many years now. They’re not doing anything. They’re not calling for emission reductions. They’re continuing to deny that these problems even exist, even though they’re already paying through the nose from them. And this is a problem that affects Republicans, not just here in the South, but all over the country. They know the problem is real even if they say differently in public and they would rather let us all drown than have to admit that we have to fix the problem.