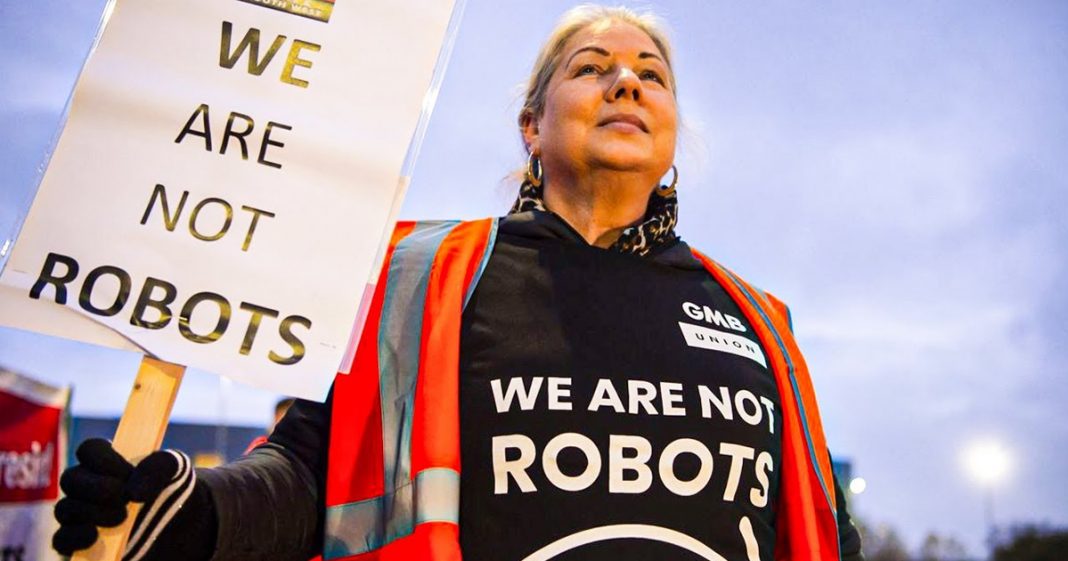 New reports have revealed that Amazon has been paying their consultants nearly $10,000 plus expenses PER DAY in order to fight off the effort to unionize their new workplace in Alabama. This money could have very easily been spent on giving workers a raise or better benefits, but instead the company decided to spend the money up front to save themselves costs on those items in the future. Ring of Fire’s Farron Cousins explains what happened.

According to new reports, Amazon was so desperate to stop the unionization of workers at their new plant in Alabama, that they started paying this union avoidance law firm by the name of Morgan Lewis, they were paying them close to $10,000 per day, plus expenses. So with expenses, you probably topped $10,000 per day, just to make sure these workers didn’t form a union. $10,000 per day, because you didn’t want to pay your workers a living wage, because you didn’t want them to have the ability to argue for better wages or better benefits or even time off. So you, you blow hundreds of thousands of dollars in the span of just a couple of weeks, just because you didn’t want to give that money to your, your workers? Now, you and I understand this, this makes no sense, right? How are you going to pay hundreds of thousands of dollars because you don’t want to give your workers an extra $2 or $3 per hour when they come asking for it years down the road.

Because trust me, the union’s not going to immediately form and then on day one say we want higher wages or we’re striking. Not how that works, not how that’s ever worked. But Amazon understands investment, right? So if you invest the money into union busting today, that could save you a million dollars down the road. These people’s lives, the livelihoods of these individuals who are going to be working for Amazon, it’s all just dollar signs to the powers that be. To Bezos and everyone underneath him in management at Amazon, you’re a dollar sign. You’re a profit or a loss. You’re a mark on a spreadsheet to them. They don’t care that you have bills to pay. They don’t care that you can’t afford to go to the doctor. They don’t care that you’re living in squalor. They don’t even care that they don’t give you breaks. All they care about is how much money they can save in the long run by busting you up today. And it’s not just Amazon.

As I mentioned this firm Morgan Lewis is one of the most expensive, according to the reports, and the top anti-union or union avoidance law firms in the country. Like this is what they do. They go around and they make sure that these corporations don’t have to deal with unionized workers. You know, they sit the workers down into these kinds of focus groups and they regale all the horrors of being in a union and how it leads to massive layoffs and all these terrible things that aren’t even true, by the way. These are people that have no moral compass. These are people that if you were to get the DSM out, would probably fit right into the sociopathic personality disorder because of the way they disregard human beings and they completely lack empathy, and they get paid big bucks to do it. And Amazon and far too many corporations in the United States are willing to pay that price now so that they don’t have to give that money to their workers later. Hell of a capitalistic system we’ve got going here in the United States, right?