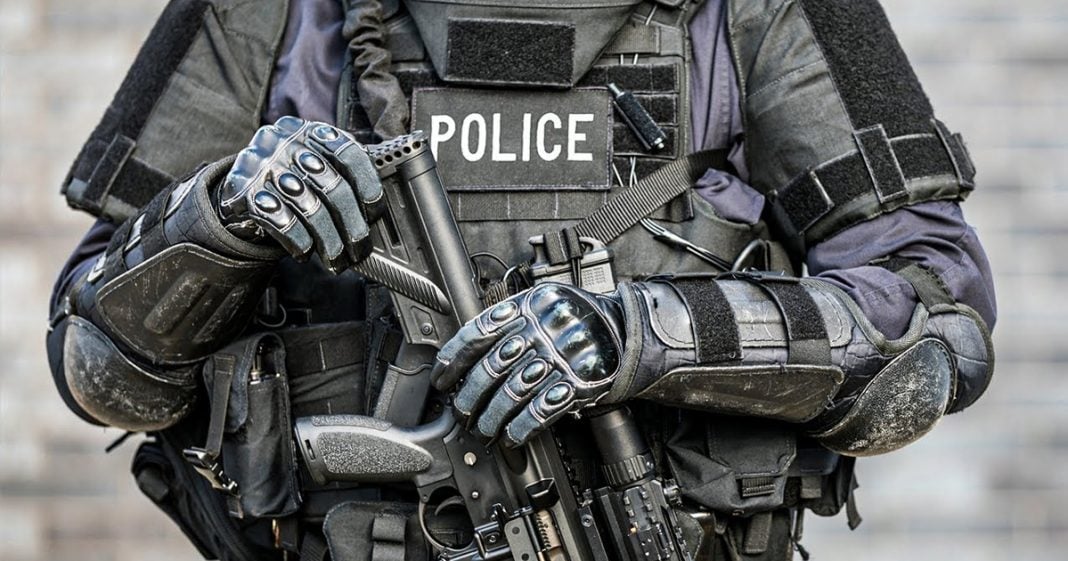 Dozens of Democrats in the House of Representatives have signed onto legislation that would put severe limits on the amount and types of surplus military equipment that is sent to police departments across the country. This program – the 1033 Program – has, by all measures, been a complete failure, and it has resulted in police departments becoming miniature militaries with enough firepower to bring a city to rubble. Ring of Fire’s Farron Cousins explains why this program needs to be immediately terminated.

Dozens of Democrats in the House of Representatives have signed onto a piece of legislation that would severely limit the 1033 program here in the United States. For those of you not familiar, by the way, with the 1033 program, that is the program that we have in place that allows the military to send some of their surplus equipment, some of their outdated equipment, to police forces across the United States. So rather than having regular police officers with guns and tasers and nightsticks, we have police officers with all of those things plus assault rifles, drones, helicopters, grenade launchers, and all kinds of things that the military just got new of. Basically police departments in the United States under the 1033 program became the, the middle child, right. You know, the first born gets all this cool fancy stuff and then when they outgrow it, you hand it down to the next one, because maybe you don’t have the money to buy them their own things.

Or maybe they just want to be like their older sibling and I think that’s a little more like it. Police officers in this country desperately want to be the Rambo type. They want to go out there, policing the streets of America, but they want to do it with all the weapons of war that the United States is paying $700 billion plus each year to get. But Democrats want to put an end to this, or at least limit it a little bit. This bill, by the way, does not put an into it, but it does limit to say, maybe we’re not going to give police departments grenade launchers anymore. Maybe if this passes, we’re not going to give them surveillance drones anymore. I fully understand, by the way, before you sound off in the comments that sure, there’s areas of the country, where you do have very severe crime, where these tools could come in handy.

Some of them, some of them, not all of them. I can’t think of a single situation here in the United States where you would need a local police department to have a frickin grenade launcher. We, we do have special forces for that. We have a national guard for that here in the United States if it ever came to that. We don’t need average every day police officers who took a two week training course to become a cop with these weapons of war that they don’t know how to use. Don’t agree with me? Fine. How about the data? The data suggests that not only does the public dislike this program by an overwhelming majority, but also that these 1033 acquirements, I guess you would say whatever it is. Acquisitions, acquisitions is the word that escaped me. These 1033 acquisitions by these local police departments have actually failed to keep Americans safer.

People don’t want to see these weapons on our street. They don’t want to see them in the hands of these unskilled police officers. They don’t want them anywhere. In fact, I bet you could argue that they don’t even want the Pentagon spending $740 billion a year on these things. We have to seriously look at what we’re doing as a country. I mean, if we looked at another country, which we do all the time and we see them using these weapons against their own people on their own streets, well, hell next thing you know, we’re calling for regime change over in that area. And yet here, when it happens in the United States, silence. Couple reports here and there from some honest journalists out there talking about how bad the program is, but that’s about it. But hopefully these 70 plus Democrats in the House of Representatives can be successful. If they’re going to make a move on this now is the time. Because if you put this off, if you wait, Republicans are going to have enough numbers at that point to prevent this from happening, thereby once again, flooding our streets with more weapons of war.