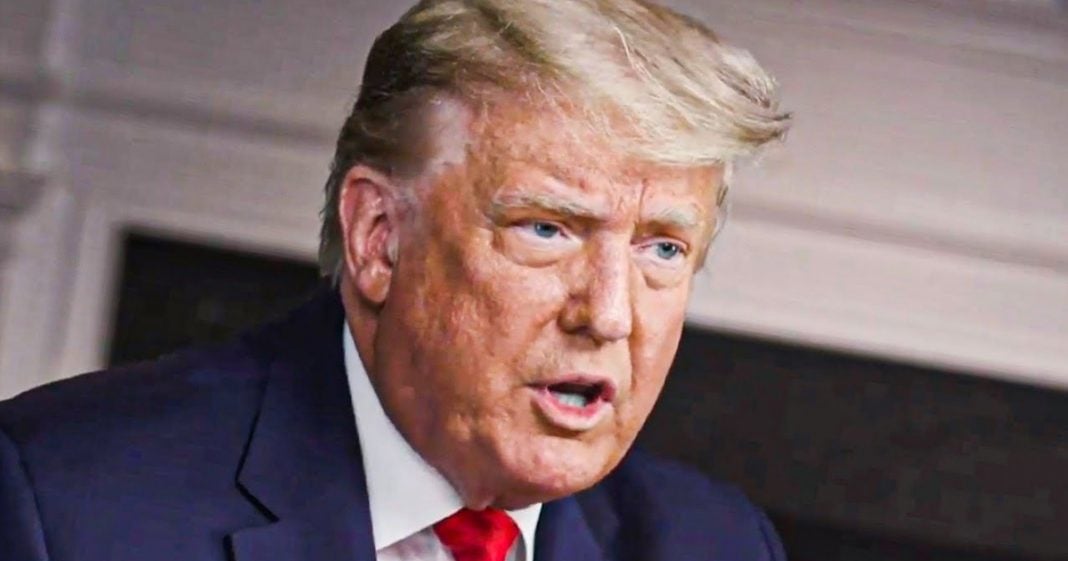 The Supreme Court’s refusal to take up Donald Trump’s last remaining election challenges last week marked the end of the drama around the election for everyone except for Donald Trump. The former President will never be able to get over his election loss, as it was the first major defeat he has ever truly suffered. All of his other business failings he was able to somehow justify, but losing to Joe Biden hurt him in a way we can only imagine. Ring of Fire’s Farron Cousins discusses this.

Last week’s decision by the US Supreme Court to not take up the last three of Donald Trump’s election challenges, pretty much put a close to the 2020 election. And I know it’s weird for that to happen in March, you know, four and a half months after, almost, the election took place. But yeah, we finally wrapped it all up. The problem is though, it’s not wrapped up in Donald Trump’s mind, and unfortunately it’s not wrapped up in the minds of his hardcore supporters. These are individuals who like Trump himself are never going to accept those results. We’re still looking at poll numbers showing that roughly half of the Republicans in this country don’t believe Biden fairly won that election. That’s a problem to a degree. Independents and obviously Democrats understand that yes, Biden won the election. A majority of people in this country do accept the results of that election, but Trump’s never going to stop.

Till the day that man finally stops breathing, he is going to talk about the fact that this election was allegedly stolen from him, even though at every given opportunity to present evidence to prove it, they failed to do so because said evidence doesn’t exist. They swore up and down, by the way, that it did, you know, they said they had it. At one point, Tucker Carlson, you know, said, he asked Kayleigh McEnany for the evidence that she said existed and she couldn’t give it to him. So even Tucker Carlson was saying, hey, why aren’t you showing anybody this evidence if it even exists? So we know the evidence doesn’t exist. There’ve been recounts, there’ve been audits. All of those things Trump said didn’t happen did in fact happen, but none of it will ever be good enough for him and here’s why. This was a unique failure for Donald Trump. The man is no stranger to failure, by the way.

He has had multiple different businesses go out of business, go bankrupt. But each one of those, he was able to sell to the public as, well, it was a strategic business move filing for bankruptcy. We remember that. We remember that from the 2016 campaign, talked about what a good businessman he was because he found tax loophole holes, and he filed for bankruptcies. But losing the 2020 election to a candidate as weak and yes, he was a weak candidate as Joe Biden, that stings in a way that none of us can even fathom for Donald Trump. It’s a sting that he is going to be feeling again for the rest of his days, because he has no way to justify it without embracing reality and the reality is that his four years as president of the United States were a failed experiment. And that experiment was Republicans telling us for decades that, run the government like a business, put a businessman in there and then, oh my God, please don’t ever do that again because it was so horrible for everyone.

So if he were to accept the results of that election, he would also have to accept the fact that he was rejected by the public. His narcissistic personality disorder will not allow him to ever believe that. So what we have to do, and it sucks. It’s terrible that we have to do this, but we have to continue to combat those lies. Not because we have to get through to him. I don’t care about getting through to him. We never will. But to the Republicans, the Republicans who still think that election was stolen, we do have a duty to correct the lies when they come out. And so that’s our job going forward. Anytime Trump comes out with these ridiculous debunked talking points of a rigged election, we have to call it out. As much as we would like to ignore it, we have an obligation to do that because we have to remind Republicans that that election was safe, that it was secure and that it was fair and that Trump will continue to lie about it because it makes him feel better.