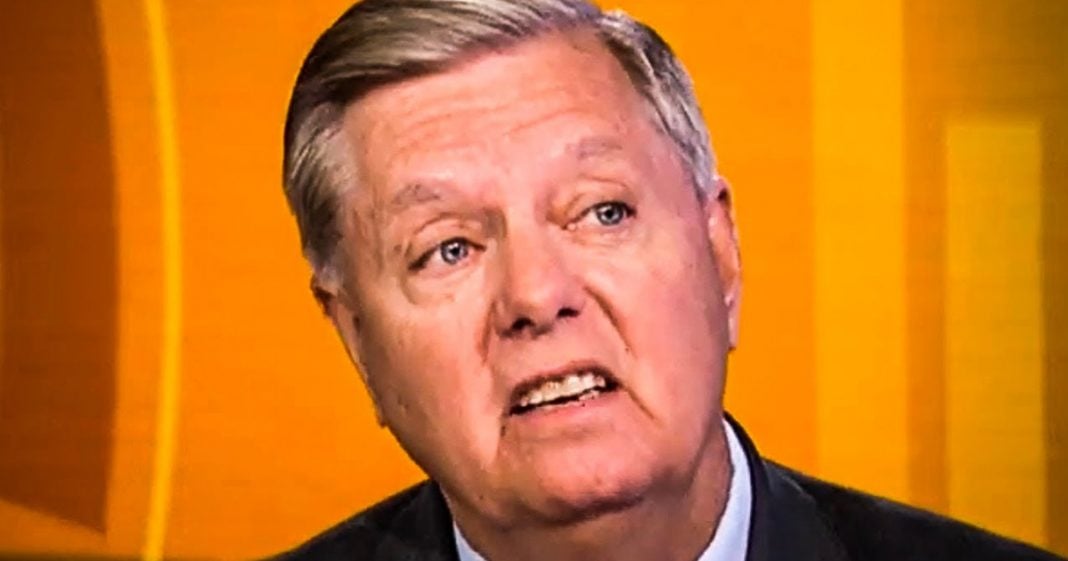 An independent watchdog group has called on Mitch McConnell to remove Senator Lindsey Graham from the Senate Judiciary Committee over his involvement in the Trump scandal in Georgia. Graham allegedly made contact with Georgia officials and asked them to throw out absentee ballots, and he is now a target in the actual investigation because of his conduct. Ring of Fire’s Farron Cousins explains what’s happening.

An independent government watchdog group called the checks and balances project sent a letter to Senate minority leader, Mitch McConnell, earlier this past week telling him that it was time to kick Republican Senator Lindsey Graham off the judiciary committee because Lindsey Graham is under a very serious criminal investigation. Now, a lot of people don’t realize, and only in the last two days really, have come to understand just how deep this investigation in the state of Georgia into Donald Trump’s attempted election interference is going. And even fewer people know that Lindsey Graham was involved in it as well and that is what the checks and balances project is talking about here. In the days following the election, Lindsey Graham, according to Brad Raffensperger secretary of state down there in Georgia, Graham phoned up Raffensperger and told him to start throwing out absentee ballots instead of counting them. Lindsey Graham is now under investigation for that phone call. Now earlier this past week as well, we also got audio of Donald Trump’s phone call to officials in Georgia.

So they also a week before that brought in an expert prosecutor in RICO. So we’re talking about potential racketeering charges against Donald Trump, which basically means there’s a lot of, I guess you would call them, co-conspirators. There’s a lot of people in the chain, if this is in fact racketeering, and Lindsey Graham could absolutely be one of them because if Donald Trump directed somebody else to go down there and actually do these things and that person does these things, Donald Trump can then be charged with it. If you can charge one conspirator with a crime, you can charge them with all, you can charge all of them with the same crime, excuse me. So that could be Donald Trump. It could be Lindsey Graham. It could be many others, but the checks and balances project has a point here. Lindsey Graham is under criminal investigation in the state of Georgia. Okay. This, this isn’t even something that if we had a Republican president, he would be able to be pardoned for. This is an investigation and if he is convicted, if it found out he did the crime or they convict him of it, whatever, it’s a crime that carries a jail sentence.

Like, Lindsey Graham has a possibility now, a non-zero chance of going to prison in the state of Georgia. Like that’s literally where we’re at. The former president has a non zero chance of going to prison in the state of Georgia. Why is this not bigger news here in the United States? Why are people not talking about this? I understand the Trump part, people are a little fatigued, but God bless, Lindsey Graham could end up in a Georgia state prison. I’m sorry, but what a fitting end to that jackasses career, right? I would love for that to be how the Lindsey Graham story ends. That’s what he deserves. He sold his soul, not that he ever really had one, and now he’s getting the comeuppance. As so many pointed out during the Trump years, if you try to work with Trump, he will end up embarrassing you and that is exactly what Lindsey Graham is facing right now. He should be kicked off the judiciary committee, absolutely. He should also lawyer up because if they taped the one phone call, I’m willing to bet they taped the one from Lindsey Graham too.