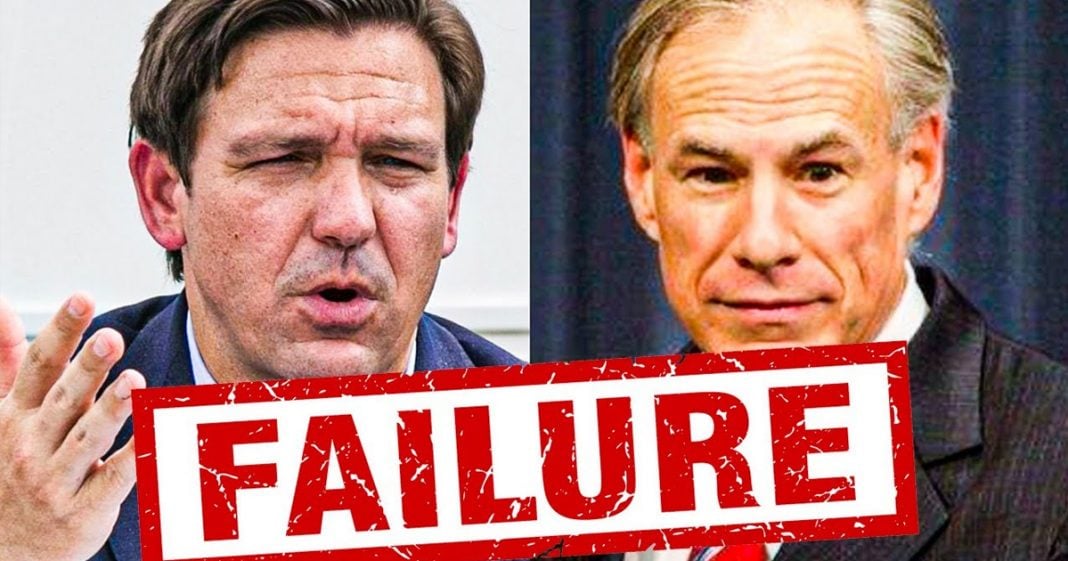 According to a new study, states controlled by Republicans saw both an overall higher death rate from COVID and a higher overall infection rate, per capita, compared to their blue state counterparts. It isn’t all that hard to figure out why this happened, and it actually started long before anyone even knew what the Coronavirus was. Ring of Fire’s Farron Cousins discusses this.

According to a new study released this past week, red States, States controlled by Republican governors, had higher instance, incidences of COVID cases and COVID deaths once the pandemic was more understood. So what does that mean? Because that’s a weird thing to say, once it was more understood. Well, think back to the early days of the pandemic. Where did it hit first here in the United States? It was hitting coastal cities, which typically go blue. You had New York, you had some on the West coast, all of which run by a Democratic governor. So yes, in the early days up until, what was it, June the beginning of June, the Democratic States were doing worse. They had more COVID cases. They had more COVID deaths. But the trend was reversing at that point and then after June 3rd, the researchers found everything skewed heavily towards red States having more cases and more deaths. So again, in the early days of this pandemic, when we didn’t quite understand what was happening, we didn’t really know how to treat it. Everything was kind of guess and check and hope for the best and then once we finally started, okay, you got to wear masks. Okay. The social distancing. Okay. The quarantines. Okay. You can treat it with this or maybe this.

Democratic States started doing better. Republican States started doing worse, and honestly, it’s not difficult to figure out why. And this actually goes to long before the pandemic even hit, long before anybody even knew what Coronavirus was. Republicans have made it a part of their party platform, if not officially, at least silently, that we can’t trust scientists. We can’t trust scientists on the issue of climate change. We can’t trust the social scientists who tell us that tax cuts for the wealthy don’t trickle down. We can’t trust any of these smart people from these Ivy league universities and those were exactly the kinds of people telling us, you got to wear masks, you got to socially distance, you got to do this and that and the other thing. And Republicans had conditioned their voters for decades to ignore the advice of these individuals and honestly, I believe that that played one of the largest roles in why the red States after June 3rd started doing so horrible.

You conditioned your voters to not listen to the smart people, because if they listened to the smart people, they’d never vote for a Republican again. And then of course you had the Republican States who just decided, we’re not even going to do anything. Florida is a great example. You know the, the trend reversed on June 3rd, Florida had already reopened everything at that point. We only shut down here for like a month and a half maybe, but we were fully open by June. We never had a statewide mask mandate. South Dakota, same situation and bunch of other States all across the country run by Republican governors who chose to ignore science, ignore data, and play into people’s fears that somehow wearing a covering over your face was oppression. So yeah, this data is not surprising at all, but the roots of this data, the real causes of it go long back before the pandemic even began and it’s just a continuation of the Republican party’s assault on not just science, but education itself.