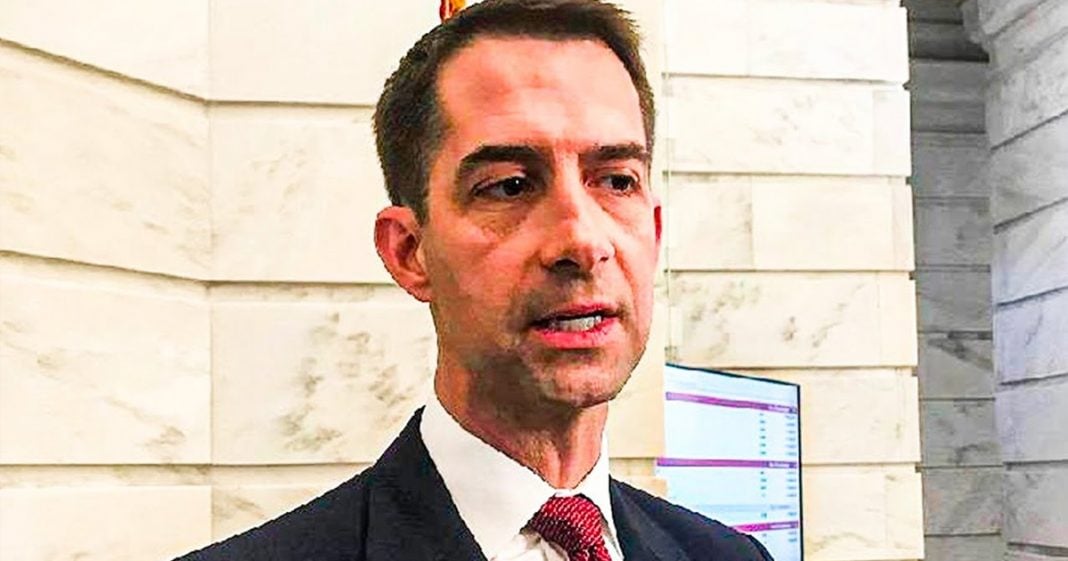 The recently-passed COVID relief bill has been attacked by Republicans since its inception, but these Republicans need to understand that people aren’t as stupid as they would like to think. The American public is well aware that many of the line items that conservatives are crying about were actually just continuations of policies that Republicans SUPPORTED in the first two rounds of stimulus payments. Ring of Fire’s Farron Cousins discusses the hypocrisy.

Republican Senator Tom Cotton is furious about the fact that this newly passed COVID relief package is going to put money, stimulus money, our tax dollars, in the hand of people in prison. And Tom Cotton says, this is inexcusable, there is no reason for this. I mean, hell, these people can’t even actually go out and spend the money. So what the hell are you giving money to prisoners for? Tom cotton wants to know and Ted Cruz has asked this question as well, as have plenty of other Republicans, and the answer is quite simple, because that’s actually what the previous two COVID packages that were signed by Donald Trump did that by the way, all of these Republicans voted for. So you knew the two past ones did this. You didn’t raise a stink about it at all, and you voted for it. But now suddenly, suddenly the Democrats are in charge and they left that provision in there and now you’re freaking the hell out because incarcerated individuals are going to get some money.

Oh no. Now, I’m curious here, is the money that these prisoners get, Tom Cotton and Ted Cruz, does that come directly out of your pocket? Because you’re fighting against it as if it does, as if you have to personally write these checks. No, the money comes from the big penny bank, piggy bank that we call the United States treasury. You know, the one that always has plenty of money for endless wars, for absolutely idiotic and insane projects that benefit nobody. But when it comes time to actually deliver for the American public, who fund you, suddenly, oh, all the money’s gone. Dang it. We just spent the last of it. Man, if you’d only asked 20 minutes ago, we totally had it. But yeah, we don’t have it. I don’t care if, if people in prison get stimulus checks and believe it or not, neither does the public because they’re all facing their own problems right now.

You know, it doesn’t affect us in any way if somebody in jail gets a stimulus check too, good for them. That doesn’t change what we get. It doesn’t change anything. It doesn’t change how much money Tom Cotton makes in a given year. It doesn’t change how many millionaires we have in Congress. They all get to keep their money. But I got to tell you, I would much rather have my money go to a prisoner who’s sitting in there for, you know, oh, possession of drugs, I would much rather it go to that individual than going to buy another missile to go bomb some people in the Middle East. I, I would rather see it go to a prisoner than to see it go towards weapons of mass destruction. The Republican hypocrisy on this issue has been fully exposed. They voted for it in the past. They don’t vote for it now. This is purely partisan, purely stupid and the best part is the public is 100% against them on this issue. They want relief. The poll numbers are overwhelming. Republicans are fighting against a very popular policy using idiotic arguments that only further expose their own hypocrisy.