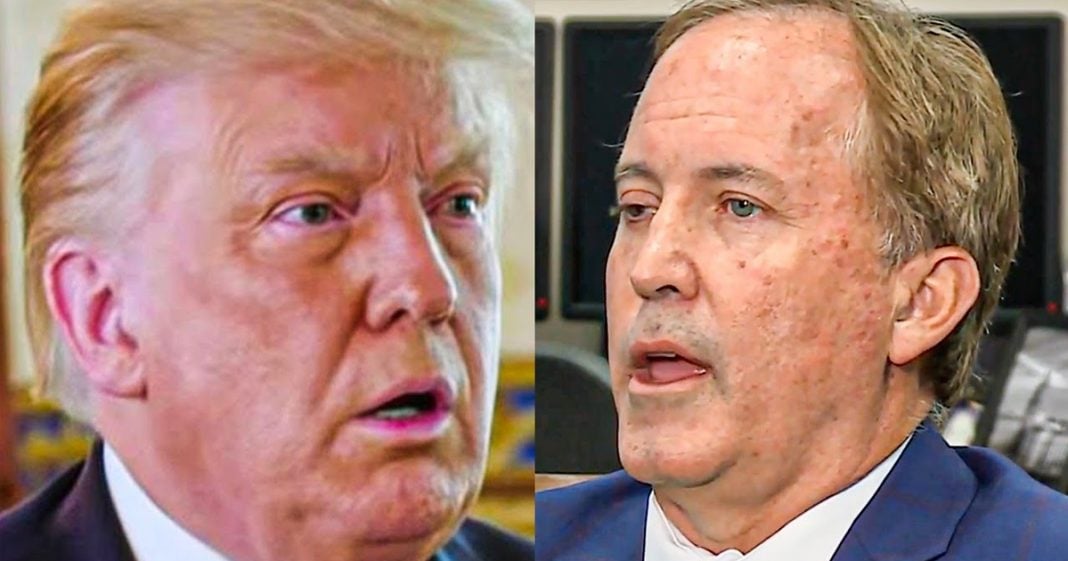 Texas’s Republican attorney general Ken Paxton tried to punish Twitter earlier this year after they banned Donald Trump from their platform, but that move has now apparently backfired. Twitter is now suing Paxton for retaliation, as his move against the company was to embarrass them, not to actually address any kind of legal transgression. Ring of Fire’s Farron Cousins explains what’s happening.

Well folks, more drama this week out of the state of Texas and this time, it once again, centers around embattled Republican attorney general, Ken Paxton. Here’s the backstory on what’s taking place right now in Texas. Paxton, along with Donald Trump spoke at that January 6th rally, the stop the steal rally, that proceeded the Capitol insurrection. And as we all know, after the insurrection took place a day or two after, Twitter decides to finally come out and says, we ban Donald Trump from our platform forever. He can never come back no matter what. Well, Paxton who is ridiculously in love with Donald Trump took it personally. And so he, through his authority as the attorney general of Texas, launched a civil investigation into Twitter and he demanded all sorts of documents from the company to find out how their decision-making process works. Essentially, he wanted to punish them for banning Donald Trump from their platform.

So he says, give me all of your internal communications, give us all of these documents that show us how you come to these decisions about when to ban Trump or when to ban any of these other people, because I’m, I’m investigating it. So this week, fast-forward, Twitter comes out and says, okay, um, we tried to be nice with you, Ken. We actually attempted to give you some documents. We can’t give you all of them because that’s a violation of our first amendment rights and, um, but you know, we’ll play along a little bit, but we’re not going to give you everything. And then finally, after Paxton said, no Twitter says, all right then, we’re going to sue you for retaliation because at the heart of it, that’s what this is. Twitter didn’t even need to offer up any documents, by the way, to this Texas AG, they, they had no compelling reason to do so.

Just as Paxton, Paxton had no compelling reason to actually even launch this investigation. What Paxton wanted to do by getting his hands on, on Twitter’s internal communications, was to embarrass them. There’s no actual criminal activity or even civil activity that would warrant this kind of investigation. This is, as we know, a private company who Republicans have fought for decades to say, they can serve whoever the hell they want and they don’t have to cater to anybody and you can’t make them. And now suddenly when Republicans are the ones on the receiving end of that, they want to sue them into oblivion. But that’s not how it works because you managed to change the laws to the point where they’re allowed to do this. Yeah, there’s two great tragedies in life. One is not getting what you want and the other is getting exactly what you want. And this is a prime example of that, Ken.

Republicans, as I said for years, fought and fought and fought for businesses, companies, corporations, to be able to discriminate against anyone for any reason and you won and you changed the way the country works to a degree. And now it’s biting you so hard on the that you can’t even concentrate anymore and I love it. It would be great if no companies could discriminate against anybody for any reason. Sure, absolutely. There’s no question about that. But it is nice to finally see you have to eat those bitter fruits of your labor. Twitter is in the right here. You are in the wrong. Twitter is going to prevail here. Ken Paxton, AG of Texas, is not. And let’s also not forget that Ken Paxton of course, is still under a pretty serious investigation that threatens to derail his entire career, you know, allegations of kickbacks and underhanded favors and bribery and whatnot. So yeah, Ken is trying to do whatever he can to distract people from his own legal problems. But I gotta tell ya, Twitter doesn’t have legal problems with kicking off Donald Trump, but now Ken Paxton does for trying to go to bat for his bestest buddy in the whole world.