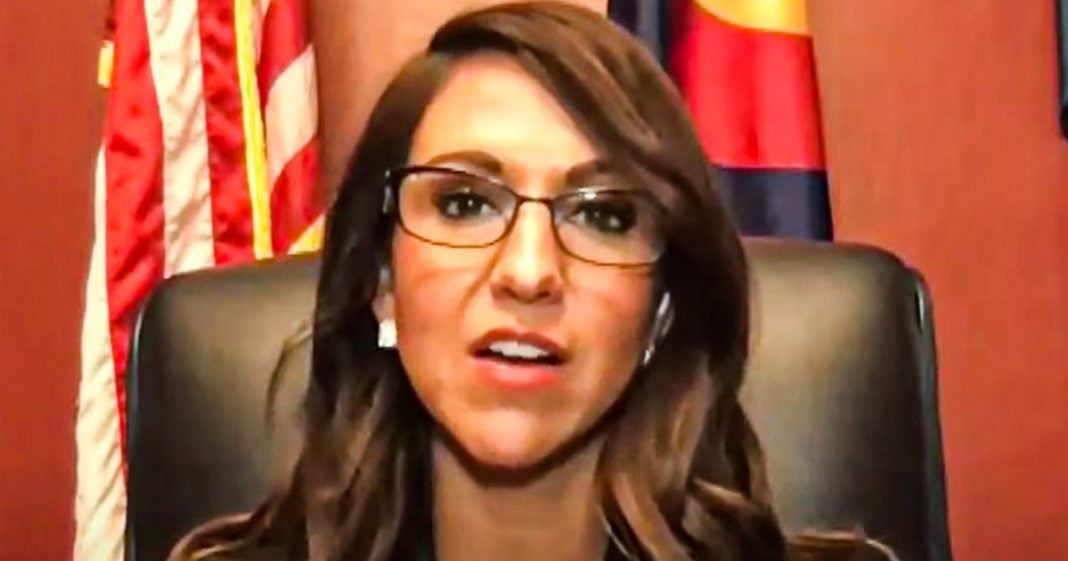 During a recent appearance on Fox News, Republican Representative Lauren Boebert unironically declared that Democrats were the Party of conspiracy theories because nothing happened on March 4th. Boebert is the one that has embraced the Q family, and she has been welcomed by them in return. The Democrats and law enforcement officials can only react to information that the real conspiracy freaks put out into the ether. Ring of Fire’s Farron Cousins discusses this.

During a recent appearance on judge Jeanine’s show on Fox news, Republican representative Lauren Boebert said that it is the Democrats who are the party of baseless conspiracy theories. Now she made these claims last weekend after of course, nothing happened on March 4th. Now to back things up a little bit more as you’ll recall, over the last month or so, more and more stories have been out there talking about the fact that the Q people who Lauren Boebert is a supporter of, had been saying that on March 4th, which was a Thursday, Donald Trump was going to re-emerge in Washington, DC and that’s when he would be inaugurated as the 47th president of the United States. Joe Biden was kind of just a place holder. In fact, he was there while they were rounding all of the bad people up and locking them away. Um, it didn’t happen. Donald Trump didn’t show up in DC. He, he certainly wasn’t inaugurated as the president.

So yet another Q fantasy fell apart. But expecting the worst based on what they had seen earlier in the year, we had thousands of national guard troops there. We had the fencing up all around the Capitol and of course there’s a picture of like the five people who showed up to the event. But yeah, so they, they were overly precautious and, and that you can’t fault them for that. You cannot fault Congress for that. And then Lauren Boebert goes on judge Jeanine’s show last weekend and absolutely tries to fault Congress for that, and she says, no one on the outside can get into the Capitol. It is only staffers and members of Congress who were allowed at the people’s House, at our nation’s Capitol. Judge Jeanine, this is complete bonkers that we are keeping people out the United States Capitol. There is clearly not a threat. There was nothing that happened on March 4th. The Democrats are obsessed with conspiracy theories and they won’t let them go.

I know this is gas lighting. I know it’s gas lighting. I know it’s gas lighting. But my God, it’s so easy to want to take that bait. And that’s the problem with people like this. That, I mean, that’s why gas lighting is, is, is, is, is a thing because it’s effective and it makes people like this. You yourself end up being the one that, that has to go crazy because these people are so nutso and that’s what we’re dealing with with Boebert. The woman who goes on TV with a background behind her that Osama bin Ladin would be jealous of because of all the guns she likes to display. I mean, this woman is not normal and we cannot let her continue be some kind of representative of what life in the United States is all about. Let alone a representative who has a vote in Congress. She Is a gas lighting lunatic, and she needs to be treated as such.

Now here’s the thing. We all So know that Boebert is deep into Q. She supports them. She has liked their posts on Facebook. She has taken pictures, multiple different pictures with the same Q people, at multiple different events. She knows them, they know her, they like each other. And she has the audacity to go on TV and act like, ah, Democrats are overblowing this. No, no, no, no, no. We saw with these lunatics can do, especially when they’re spurred on by even more dangerous lunatics like yourself. We had to protect the Capitol because people like you encourage these crazed individuals just a couple months ago. That doesn’t mean the Democrats are buying into conspiracy theories, it means they’re having to react and waste our money on conspiracy theories that your friends, Lauren, are pushing.