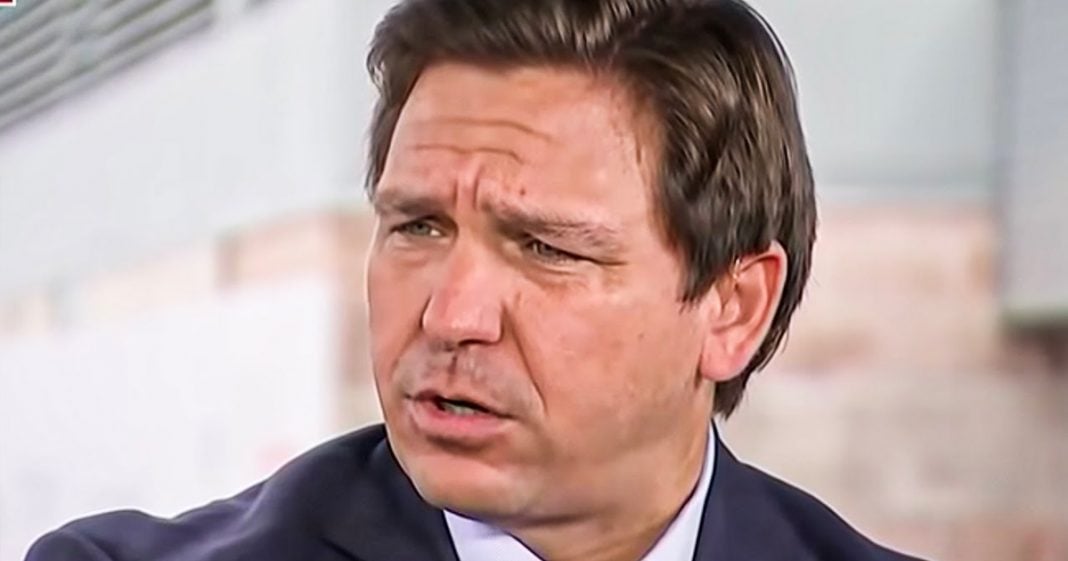 Florida Governor Ron DeSantis needs to be investigated, and that might actually be the understatement of the century. A new report claims that the embattled Florida governor and state officials actually ordered Baptist Healthcare to give up the vaccines that they had secured for their facilities and instead give them to DeSantis’s wealthy friends and donors. This scandal is only getting deeper for DeSantis, and Ring of Fire’s Farron Cousins explains what we know so far.

Republican Florida governor Ron DeSantis is an even more hot water now, if you can imagine it, because it appears at this point that his state government ordered a hospital chain, Baptist healthcare, one of the largest healthcare providers, one of the biggest hospital corporations here in the state of Florida and throughout the South, ordered them according to reports to give their doses of the COVID vaccine to the wealthy communities in South Florida that donated thousands and thousands and thousands of dollars to DeSantis’ campaign. Now, the Florida government run by DeSantis, swears they never stepped in at all. They never told Baptist you had to give us your vaccine doses so we could send them, you know, to, to the wealthy communities down there in South Florida, which we all know is happening. We have reported on it extensively. It’s been all over the news and that’s what’s happening in case you’re not familiar.

Quick recap. The governor actually directed these mobile vaccine units to start traveling around these wealthy gated communities down in South Florida. Most, not most, some of the communities are owned by super wealthy DeSantis donors who gave over a hundred thousand dollars to his campaign. The others are communities where most of the residents gave a couple thousand a piece to Ron DeSantis. And when local officials said, hey, why are you doing this? Why aren’t you giving it to the rest of us? DeSantis said, shut up or else you guys will never get it. And now Baptist healthcare again, super powerful healthcare corporation, comes out and says, they made us give up our vaccines. We had to cancel appointments we had made for people because we had to give our vaccines, by the state’s order, to the wealthy down in South Florida.

So right now we have a they said, they said situation. The state says, no, we did not do that. The hospital corporation says, yeah, you did. Who has incentive to lie here? What does the hospital gain if they’re lying? Because they know they get everything they want from these Republicans who run the state of Florida. Right? They get to do whatever the hell they want. So taking on a Republican isn’t exactly in their best business interest. You know, and their best business interest by the way, is screwing over the public. So they have really nothing tangible to gain if in fact, they’re the ones lying as the state says they are. Meanwhile, the state, what do they have to lose? Uh, how about an election in 2022? That seems like a big deal. Ron DeSantis is already under fire for how horrible he’s handled the pandemic here in the United States.

He’s been under fire for the last two months about sending the vaccines to his wealthy communities in these so-called vaccination pods, they’re mobile units, by the way. I like to compare them to ice cream trucks going around this wealthy neighborhood, just giving people the vaccine. So yes, he has everything to gain from lying and the hospital has nothing to gain. So knowing those two facts, which one do you think is telling the truth with this story? DeSantis has to be investigated and almost equally as important, every Democrat considering running for any election here in the state of Florida, needs to be taking stories like these and putting them in campaign ads and running them starting today. Because if you sleep on this, if you let them gain control of the narrative, you can kiss Florida goodbye for another four years. Use it to your advantage or lose the state again.