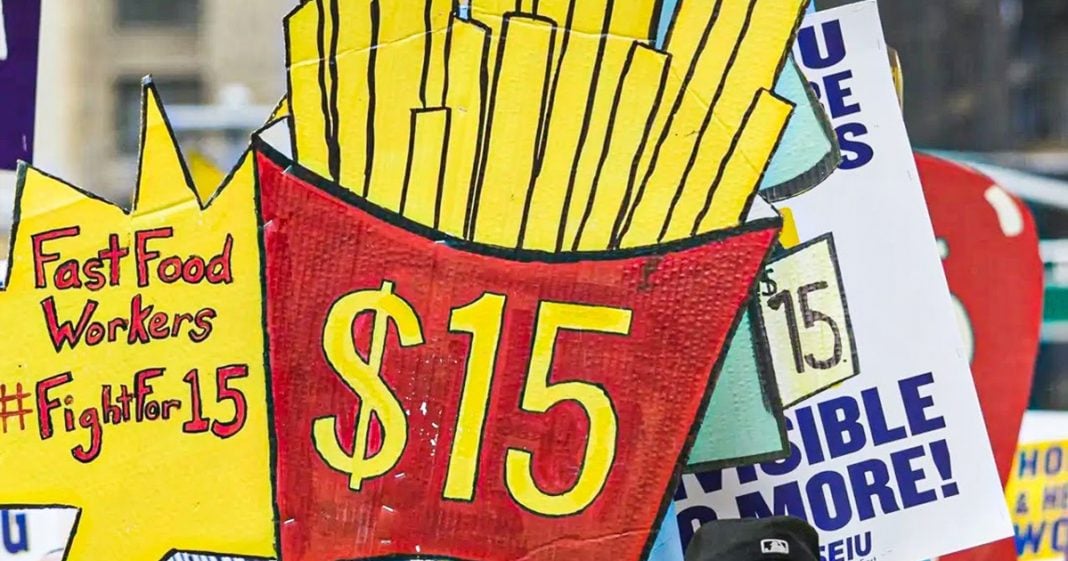 While the Fight for $15 may have been sidelined in the Senate, certain Democratic Senators refuse to give up the fight. Senator Ed Markey became the latest Democrat this week to vow to continue fighting for a living wage for American workers and to lift millions out of poverty. This fight is broadly supported by the American public, but Democrats need to get their members in order before they can hope to be successful. Ring of Fire’s Farron Cousins explains what’s happening.

Even though the fight for 15 in the US Senate right now is put on hold, shall we say, plenty of Democrats still in the Senate and even some in the House say that this fight is far from over and in fact that the fight won’t be over until they’ve won. And that’s the kind of attitude that we want from the Democratic party right now, less of this and more fighting. The latest Senator to come out to say that, hey, we’re not done with this and it’s not going away until we pass it, is Democratic Senator Ed Markey, who has always been a pretty strong, progressive advocate. Of course, you’ve got Bernie Sanders out there on the House side, you’ve got the members of the squad saying, this is how it has to be. So there are Democrats that are out there fighting for what we need and what we need is a living wage for minimum wage earners here in the United States, a wage that has not been raised on the federal level in over 10 years, 2007.

So we’re talking about 14 years at this point, um, that has to change. And what’s ridiculous at this point is the fact that this is something that is broadly supported by a majority of people in this country, which makes little antics like Kyrsten Sinema’s from last week, her thumbs down, it makes it all the more infuriating, because this is something the public wants. They want to see this happen. They want people like Markey out there fighting and telling us that we’re not done. That we’re not giving up on this simply because it failed in this one instance. They’re going to continue fighting. The problem that Democrats do have though is people like Sinema. People like Manchin, who for some fricking reason that we don’t even know really aren’t all on board with this and that’s what makes it so troubling. The Democrats have to get their own house in order before we can move forward on this. Because you have to have based on the numbers in the Senate right now, you have to have every single Democrat. Every single one of them has to support this.

And it has always amazed me, the fact that Republicans can come up with some of the worst policies, policies that are hugely unpopular, but when it comes time for a vote, they can get every single one of their members to do it. Most of the time, not all the time and Democrats, no. It’s like herding cats. You take a policy proposal that is supported by huge majorities of the country, whether it’s things like debt-free college, Medicare for all, raising the minimum wage, people want all these things and Democrats are still like, eh, what if it costs me politically? They support it you, you not smart person. How can you be punished for doing what’s popular? Not just what’s popular by the way, but what’s right. Giving people a living wage, lifting millions of people out of poverty and stimulating the overall economy of this country is always the right thing to do and if it’s not the politically expedient thing for you to do, then suck it up.

Stop thinking about, oh, well I have to win my next election, bull. You won an election because the people chose you to go do this job. You do that job. That’s how politics should work. But far too many of these people in DC treat this as a career. They’re always looking to that next election. Oh, I can’t risk losing. I have to be here. I have to hold this power. Why? You’re not using it. So you should be losing it. And that’s the mentality that we, the voters have to take with us. If they’re not going to go there and fight for us, I don’t care if they’ve got a D by their name, primary them, get them the hell out and replace them with somebody who’s actually going to do some good for the country.