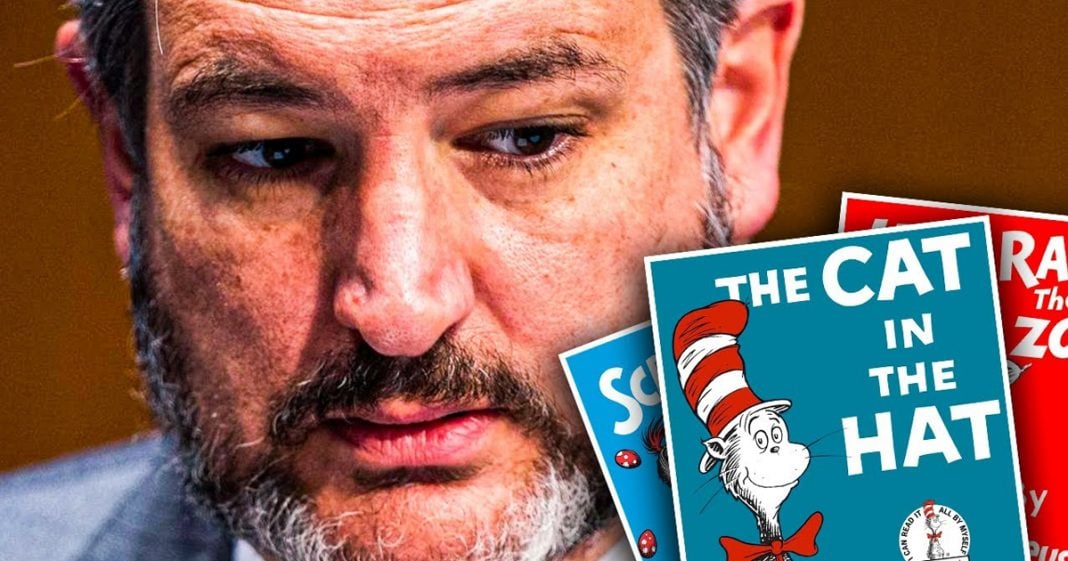 Republican Senator Ted Cruz has absolutely no clue what he’s doing. He was once a force to be reckoned with in the Republican Party, but now he’s been reduced to a gimmicky salesman. He is currently autographing and selling Dr. Seuss books for $60 a piece as a fundraiser, hoping to capitalize on the anti-cancel culture brigade. Ring of Fire’s Farron Cousins explains what’s happening.

Republican Senator Ted Cruz is hoping to capitalize on all of this anti cancel culture nonsense taking place in the United States today and he is actually selling autographed copies of Dr. Seuss books for $60 a piece, as part of his latest fundraiser. Now, these books are obviously not signed by Dr. Seuss himself. No, they’re signed by Ted Cruz. So if you’ve been wanting a children’s book signed by a US Senator than, uh, I guess this is for you. So what’s happening here is that you have Ted Cruz and plenty of other Republicans, you know, trying to capitalize on all this. They’re off about the fact that the Seuss estate decided to pull some of their books off the shelves for, you know, basically being racist and Republicans think that this is somehow the Democrats going a little too far with their so-called woke culture.

When in reality, it again, is the estate saying, yeah, we’re not going to put these out anymore. Some of the things are a little outdated because, you know, they’re really insensitive towards race, so we’re just not going to do it. So Republicans in their anger at Democrats have actually been boosting the sales of the people who decided to pull the books in the first place. Yeah. We’re not dealing with the brightest bunch of individuals here and certainly Ted Cruz is, is not among that crowd either, but here’s what’s so funny to me about this entire thing. Ted Cruz at one point was actually a rather savvy politician, right? Like he was tactful. He knew how to say the right things. He knew how to engage an audience. And then when Donald Trump came along, kind of threw all that out the window. He hammered Ted Cruz so hard in the 2015 and 2016 primary that I think he broke him.

I think he broke Ted Cruz and now Ted Cruz thinks that rather than being the mild mannered, you know, politician, he has to be this crazy extreme fringe figure. And it makes sense too, because Ted Cruz has always, you know, tried to mold himself into what people want him to be, which is again, one of the reasons most people don’t like him. As I’ve mentioned before, back when he was with, working with the Bush campaign back in 2000, on the recount as one of their lawyers, he was hated by everybody. That’s why he didn’t end up getting a job with the Bush administration. Nobody liked him. Nobody wanted to work with him. And I think Ted Cruz is finally starting to realize that and that’s why he’s trying on these new personas. Oh, am I going to be an anti cancel culture warrior?

Am I going to be the savvy politician? What am I going to be today? Am I going to be the guy that does funny movie impressions on a, on a video clip? Because I know we’ve all seen those as well. He doesn’t know who he is, but he does know that he pretty much doesn’t stand for anything, which you could say the same thing about the entire Republican party. This right here, his latest move, these $60 Seuss books with his autograph on them, is just the latest, trying to capitalize on the culture wars, all of these nonsensical things, because Republicans can’t actually talk about issues. You know, y’all just voted against that stimulus package that Joe Biden signed yesterday and instead of offering the public something better, explaining yourself on it even, you’re instead doubling down on your Dr. Seuss mania, because you think that is a winning strategy. Just kind of shows you how far the Republican party in the United States has fallen, rather than talking policy, rather than delivering for the people, they’re angry at Dr. Seuss.