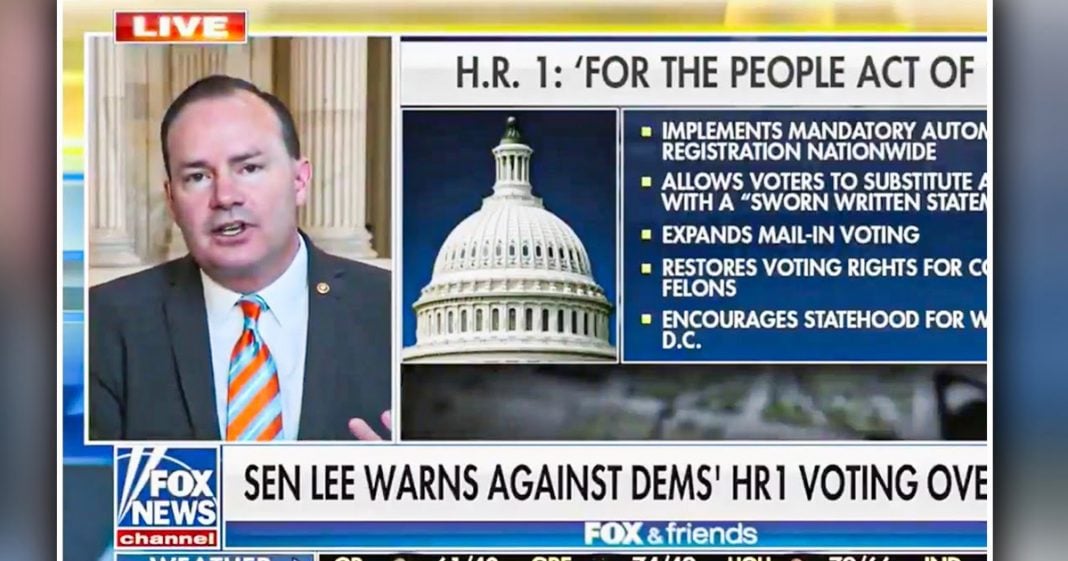 Republican Representative Mike Lee apparently has a flare for the dramatic, and he went on Fox News on Wednesday to show the world how much of a drama queen he can be. Lee told Fox that HR1 – the voting rights bill passed by Democrats – was so bad that it could have been “written in Hell by the Devil himself.” What is Lee’s problem with the legislation? It gives more people access to ballots, which is always bad for Republicans. Ring of Fire’s Farron Cousins explains what’s happening.

The devil went down to Congress. He was looking for a bill to write. And apparently he came up with HR1, which is the voting rights expansion pack that Democrats are trying to get passed right now. But yes, folks, the devil himself wrote this piece of legislation, according to Republican Senator Mike Lee. Mike Lee believes that the devil did not actually come down to DC to write this. No, the devil wrote it in hell and then I guess somehow sent it up, of course, metaphorically because Senator Mike Lee doesn’t actually think it happened. But anyway, I’m putting words in the man’s mouth. Listen here to Republican Senator Mike Lee tell us where, where bill HR1 actually came from. Here he is.

Mike Lee:              Everything about this bill is rotten to the core. This is a bill as if written in hell by the devil himself. Uh, this, this takes all sorts of decisions that the federal government really has no business making. It takes them away from the States, makes them right here in Washington, DC by Congress.

So this bill must contain some pretty horrible things, right? For a Senator to say that this bill looks as if it was written in hell by the devil himself. I’m assuming there’s passages about child sacrifice, about kicking puppies, maybe shaving kittens. I, I don’t know. So let’s, I mean, we’ll take a look and we’ll see, we’ll see what we can find in here. What does HR1 do that’s so terrible? Require States to enact online automatic and same day voter registration, and to give voting rights to the formerly incarcerated and it softens voter ID laws by allowing voters to sign sworn affidavits instead of showing an ID. It’s already a federal crime to lie about your identity while casting a ballot. The bill also requires all States to hold 15 days of early voting, as well as no excuse mail voting while offering online ballot tracking, prepaid postage and the option for voters to return their ballots at drop boxes.

Dude, if this was written by the devil, the devil is pretty cool, right? These are common sense things, but the reason Mike Lee thinks that the devil himself could have written this piece of legislation is because this would essentially be the death of the Republican party and we know that because Republicans have told us this would be the death of the Republican party. Donald Trump was making phone calls earlier this week, telling Republicans, if you don’t vote against this, if you don’t stop it, we may never win another election and Trump said that repeatedly last year. Rand Paul is on record having said that .plenty of other Republicans have said that if we expand access to the ballot, Republicans are gone. And that’s why Mike Lee thinks that this could have been written in hell by the himself. But if you ask me, you got it backwards. A future where Republicans are incapable of winning elections, because people actually get out and vote. Doesn’t sound like hell to me, it actually kind of sounds like heaven.