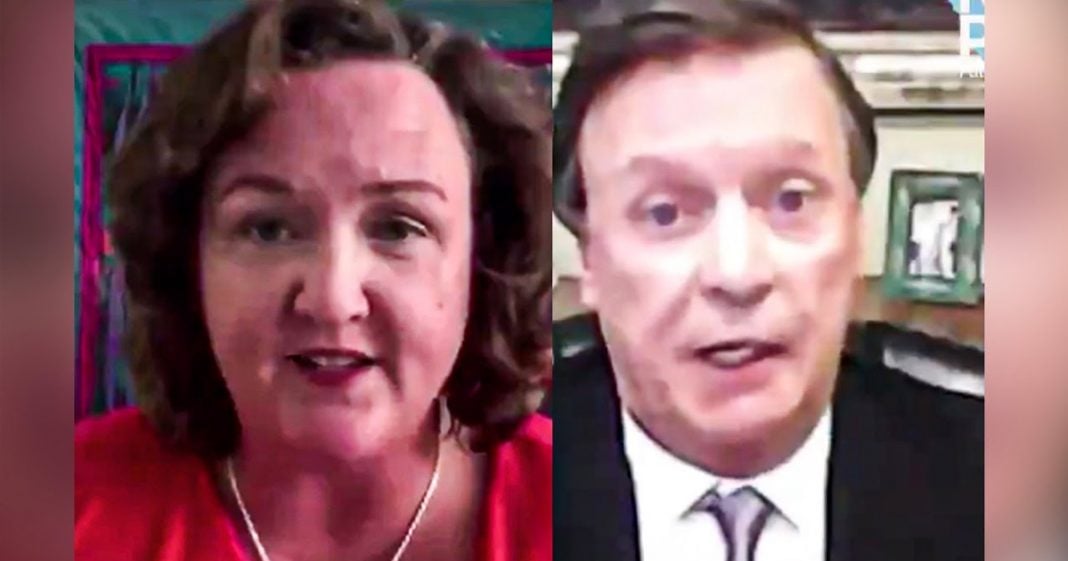 Representative Katie Porter has a reputation for being a fierce opponent during House hearings, and she reminded the country why that is again this week when she took a fossil fuel executive to task for attempting to lie to her face. The executive tried to claim that oil companies don’t have special tax rules, but Porter was there to remind him that they do, and listed the differences between their taxes and the taxes of other corporations. Ring of Fire’s Farron Cousins discusses this.

Democratic representative Katie Porter is essentially becoming a rock star when it comes to handling executives during hearings, in the House of representatives and on Tuesday, she did it again. You know, we have watched her take on, you know, big wigs from other industries and then on Tuesday, she’s got a fossil fuel executive virtually, that’s how they’re doing the hearing, and he tries to, I guess, mansplain how the taxes for his industry really work. And by God Katie Porter, wasn’t having it because apparently she knows a hell of a lot more than Mr. fossil fuel executive did and so I will let her take it away. Ladies and gentlemen here is Katie Porter, absolutely embarrassing this arrogant fossil fuel executive. Take a look.

Mark Murphy:                      There seems to be a misconception out there that you’re operating from, that somehow the oil and gas industry, uh, benefits from some special sort of tax structure. We don’t, we actually, we actually.

Katie Porter:                        Reclaiming my time. Mr. Murphy. I will follow up with you Mr. Murphy, but you do benefit from special rules. There’s a special tax rule for intangible drilling costs, but does not apply to other kinds of expenses that businesses have. You get to deduct 70% of your costs immediately and other businesses have to amortize their expenses over their entire profit stream.

Katie Porter:                        So please don’t, please don’t patronize me by telling me that the oil and gas industry doesn’t have any special tax provisions, because if you would like that to be the rule, I would be happy to have Congress deliver. I yield back.

I want to watch that video on repeat forever because I love it. Now Katie Porter is obviously been going viral because of this. But here’s the thing, it’s, it’s great that she’s going viral. It’s great that people get to see this, but it’s not just a, ah, booyah, we got you. We just got to see firsthand how these fossil fuel executives will lie to our faces, including lie to the faces of lawmakers, about what actually happens in order to protect their money. There is nothing that is off limits for these individuals. That’s the disgusting part of that video. The implication of what it means that this man is sitting there lying to her face and then just sitting there kind of sheepishly when she points out that he’s absolutely lying and she offers of course, to rescind that special tax break, which honestly should be rescinded anyway. You know, again, no other business gets to do, gets to off the kinds of things that the fossil fuel industry gets to write off. And this is why they end up with $14 billion per year in subsidies and tax breaks.

Some of the subsidies though are direct cash payments. It’s 14 billion a year now. That is how much the fossil fuel industry is extracting from Congress while also poisoning the planet. Katie Porter did the right thing there, but you know what also gets me and I think we need to kind of think about this a little bit. Do you know why videos like that go viral? Because they don’t happen often enough. If we had more Katie Porters and I know videos of, of, of AOC and Rashida Tlaib, Pressley and Omar as well, Ted Lieu and Ro Khanna both, like videos of them doing similar things to, to executives have, have also gone viral, but we don’t get them enough. And really beyond that group, we really don’t get too many of them from other folks in the House. So it’s great that this is going viral, but I want to see more of these. I want these viral videos like this of, of representatives taking down CEOs and executives, I want them to be so common that we almost get tired of them because that’s what needs to happen. We need more people like Katie Porter in the House of Representatives and to be frank, in America in general.