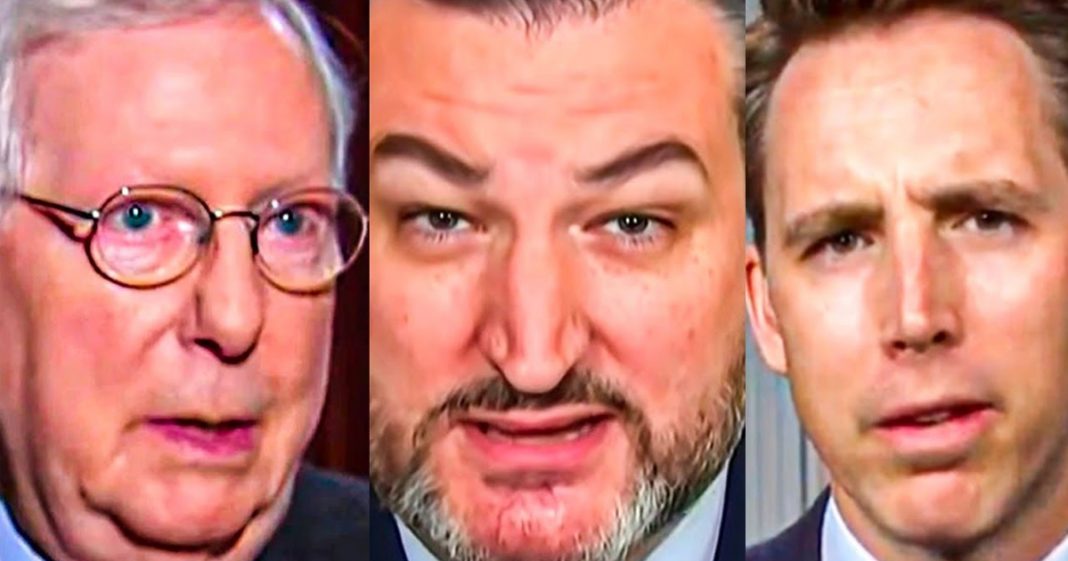 The third COVID relief package for American citizens has now passed both Houses of Congress, and not one single Republican legislator voted for it. Their constituents are suffering just as much as everyone else, and many are suffering even more, but these whiny babies couldn’t bring themselves to vote for a relief package that would keep people from falling into poverty. Ring of Fire’s Farron Cousins discusses this.

Yesterday, the third round of COVID relief for American citizens was passed, every single Republican in both the House and the Senate voted against this legislation. So here we have a COVID relief package to help millions of struggling Americans and not one single Republican voted for it. Now these are the same kind of parameters, except scaled down a little bit, to be honest, of the previous COVID relief packages. So all this Republican grand standing about, well, we don’t want it to go to prisoners. We don’t want it to go to the, yeah, the other ones already did all those things that you’re claiming this one does and you voted for those. But you are just so petty that you refuse to vote for something when there is a Democratic majority, that is what we’re dealing with right now. Um, and so I hope this is actually a warning to all Republicans.

Uh, excuse me, Democrats, don’t try to work with these people, cut them off for the next two years up until the midterms, cut them off. Don’t let them come to the White House. Don’t let them be a part of meetings. Don’t let them be a part of decision-making processes. Cut them off, they’re done. They wouldn’t come together and deliver for the American public. Get rid of them. Don’t let them be a part of anything for the next two years. That’s what the Democrats need to do. As for the voters in the areas that continuously vote for these grand standing Republicans, stop doing that. You’re literally voting against your own livelihood, your own ability to survive the pandemic. You’re voting against that when you support a Republican. So I guarantee you you’re supporting them not for financial reasons, but either for, well, if you’re wealthy for financial reasons.

But if you’re just the average American you’re, you’re voting for Republicans based solely on social nonsensical culture war. Stop that, because the only person you’re hurting by doing that is yourself. Here’s an analysis from Reuters. Republican leaning States would get a net $3,192 per resident from this stimulus. Whereas left-leaning States would get 3,160 per resident. So yes, red States, Republican leaning States actually get more from this and yet every single Republican voted against it. And the reason red States get more is not because the Democrats chose to favor them, it’s because of how the algorithms work in determining where the money is needed the most. Because as it turns out, poverty’s a little bit more rampant in red States. I do have sympathy for these red Staters, trust me. I absolutely do. But my sympathy is running low. They have to understand that they keep putting horrible people in power because they’re getting hoodwinked.

It’s not just Donald Trump that’s brainwashed these people, every single Republican out there, if they’re talking about Dr. Seuss, Mr. Potato Head, transgendered athletes or transgendered bathrooms, they’re trying to brainwash people into not thinking about real issues and far too many of them fall for it. You have to wake up and understand that you’re being duped by these individuals who consistently vote against your own self-interest. This COVID relief package that Biden is supposed to sign on Friday is from the Democrats. It is 100% from the Democratic party and in spite of that, you still have some Republican lawmakers, the ones who voted against it on Twitter taking credit for it. You have Donald Trump sending out his idiotic press release saying, this is really from me because I did the first one, so this. Y’all are, I mean, borderline psychotic. The Democrats did this and while it is certainly not perfect, it’s a hell of a lot better than the Republican decision to do absolutely nothing.