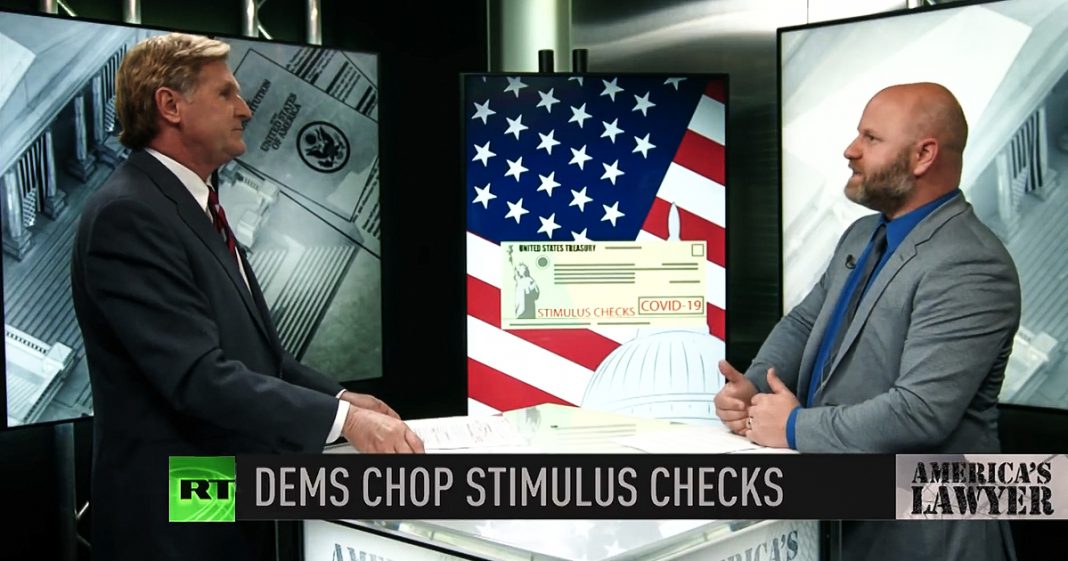 Mike Papantonio:             Democrats can’t help but defeat themselves and the new stimulus package is just further proof of that. Oh my God. Okay. Let me defend Biden again. All right. Biden’s thinking I got to get something out there, right? The advertisement, as you and I’ve talked about going to the next election is look, the Republicans put out three times as many stimulus checks as the Democrats. That’s where this is heading. Biden’s advisors know that. They’ve got to do something. What’s your take?

Farron Cousins:                  Yeah, I mean, the stimulus was definitely needed. They had to move quickly. They should have moved faster than they did. They got held up with the impeachment and all that, and so that put this way on the back burner. But limiting it, allowing these centrist Democrats, your Joe Manchin’s, your Sinema’s from Arizona, to come in and say, well, what if we just gave it to 17 million fewer people than we did that last round? And as you just said, it opens up the door. Republicans are now looking at this saying, great. We can go to the public in 2022 and say, Donald Trump gave you more stimulus checks than Joe Biden. Donald Trump gave more people more stimulus checks than these Democrats did. We’re more generous. We’re the working class party, is the rebrand they’re working on right now.

Mike Papantonio:             Farron, there’s other parts to it. The idea of whoever told Joe to go out there and make a promise of $2,000. That was a mistake. You know, he goes out during the election, everybody’s going to get a $2,000 check and bring the, elect these folks in Georgia and you’re going to get a $2,000 check. He just got bad advice. You know, I mean, he’s not surrounded by a bunch of geniuses and he needs to be surrounded by very smart people. They’re not that smart. So as you look at this, this deal now, Manchin, you know, he’s not the only Democrat who’s a centrist millionaire. I mean, multimillionaire making a decision, well, we can’t, we have to reduce the amount of money we’re giving. And so now it’s reduced to $80,000 threshold and a $160,000 threshold. But the point is the numbers that are left out are staggering. Now, if we look at this, they said that they’re going to, what are, they’re going to have their big meeting where they all, they, they kind of all meet in a big room and then finally, they’re going to make some decisions. What do they call it? The, the vote-a-rama.

Mike Papantonio:             They literally have a name, the vote-a-rama, and then they’re supposed to come out with a plan, finally. They’d better get busy. What do you think?

Farron Cousins:                  Yeah, I, I agree. And, and the whole thing that bugs me about this is that they didn’t lower the thresholds because they were going to get more Republican votes. Republicans all voted against it. They lowered the thresholds to negotiate with themselves. They’re acting like they’re the ones who have to pay this money out of their pockets. They, they don’t. There was no harm in letting those 17 million people keep their checks. So that’s what makes no sense to me at all. You can’t follow logic on that because it doesn’t exist with these individuals, but it’s what Democrats typically do. They come up with a good idea, but right before they make it a reality, they make it a little less good.

Mike Papantonio:             When you have millionaire Democrats who have more money they know what to do with, making decisions whether or not somebody should get a, you know, a small check. So, that, that’s, that’s the sad part about this.

Farron Cousins:                  And then Joe Manchin’s daughter, just for the record, in case anybody forgot is the one who at Mylan, jacked up the prices of the EpiPens.