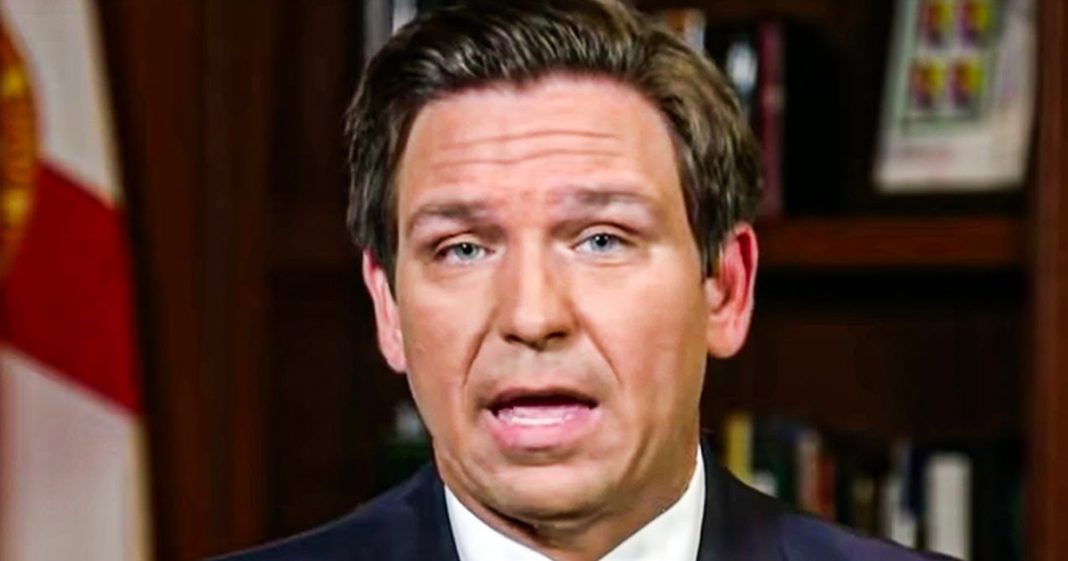 Text messages between officials in the Florida government reveal that the staff of Republican Governor Ron DeSantis wanted his VIPs to get vaccines while the governor was visiting Manatee County for a photo op. This is just the latest in a long string of negative press for the Florida governor, and in a normal state there would be crowds of people demanding his removal. But Florida is a different animal, and DeSantis’s scandal is likely going to get him rewarded rather than reprimanded. Ring of Fire’s Farron Cousins discusses this.

A new report has revealed the text messages between staffers for Florida’s Republican governor Ron DeSantis. These staffers were actually talking about lining up some of DeSantis’ own VIP’s, meaning his wealthy donors, for a publicity stunt that the governor held down in Manatee County, Florida on February 17th. Now what this was, was a vaccination event down in Manatee County, which is where a lot of wealthy Republican donors live. That’s where DeSantis has steered a lot of the vaccines and he was going to go down there, do a quick little photo op, probably get on the local news. Maybe even the national news, if it, if it was big enough and his staffers said, well, how can we make this seem even more corrupt? I know what if we corral in a bunch of his wealthy friends and show them on video, getting vaccinated. What a bunch of idiots, right?

I mean, for real, this, this is an absolutely stupid idea. The text messages have been recovered. We know this is what they were trying to do on top of all of the other information that has come out, showing that Ron DeSantis, the Trump loving Republican governor of Florida did in fact, steer vaccines towards wealthy communities that supported his campaigns. Now in a normal world, this would be one of the biggest stories in the country right now. There’s a reason it’s not and that’s because another governor is taking center stage with all of his scandals that are equally horrible and that happens to be Andrew Cuomo. And yes, I do believe that because a lot of the national spotlight is on governor Cuomo, our governor down here in Florida, who is basically letting poor people die to reward his rich donors, yeah, that’s getting kind of swept under the rug. Nobody is talking about this at the level it should be talked about.

People in Florida are dying just like they are in New York and our governor, our Republican governor, is okay with that because he has to make sure that the people who actually fund his campaigns live, that they survive the pandemic to donate another day. That’s what’s happening down here in the state of Florida. This should be headline news on every single network, hell, at this point, it should be international news. In a just world and a just country, it would be. And if Andrew Cuomo had the courage to step down, resign and take himself out of the spotlight, we might be able to shine more spotlights on corrupt pigs like Ron DeSantis. If the media had a shred of dignity, they would be amplifying this story to the moon and back, but they’re not and this is a story, by the way, that has been going on now for a month. And unfortunately, here in the state of Florida, obviously with a Republican controlled state legislature, they’re not going to impeach DeSantis. They, a couple years ago, rewrote the rules of the Florida constitution saying that we, the constituents in Florida cannot recall our governor.

So we are stuck with this guy. We are stuck with him. There’s no mass calls for his reg, resignation. Not that he would he’d them anyway. We’re just stuck with this corrupt SOB, sending vaccines, literally taking them away from hospitals, Baptist healthcare corporation here in Florida said that he told them the governor’s office told them to give up their vaccines so they could go to the wealthy communities. The governor’s office denies this, but Baptist healthcare, one of the largest healthcare providers here in the state of Florida says, well, that’s what happened. Again, should be headline news all over the country. But it’s not and there’s multiple reasons why, but I think one of the biggest ones is because Cuomo is hogging the spotlight right now with his own scandals and refusing to step down. So of course our slimy little crocodile governor down here, actually it’s Florida, so I should say alligator governor, gets to go about with his corruption. And none of the Republicans in this state are saying a thing about it.