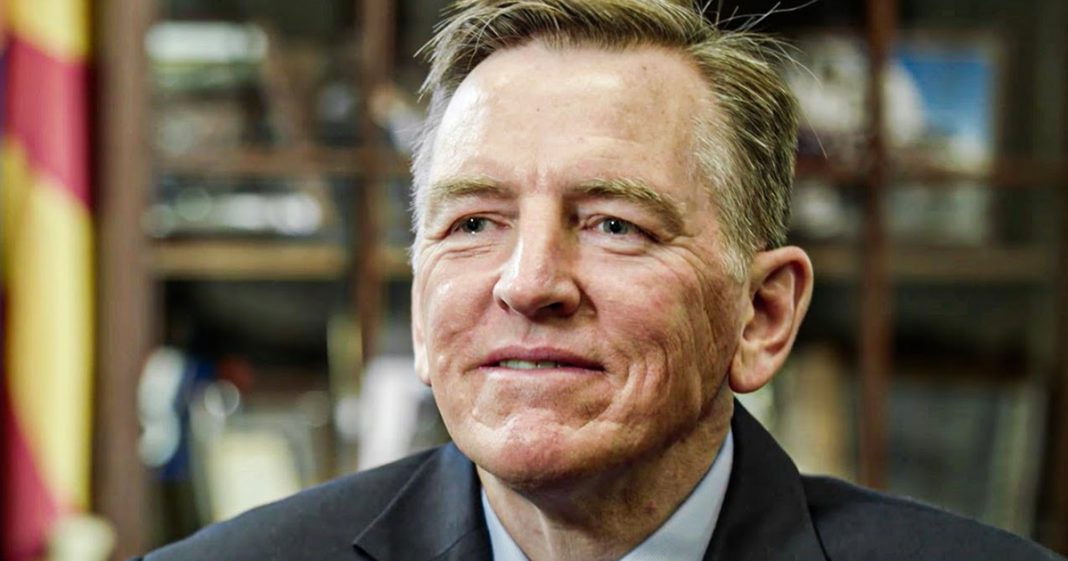 Some Republicans have decided to go completely mask-off, and they are letting their horrible true selves be known. One of those people is Republican Representative Paul Gosar, who had no qualms about tweeting out the motto of white nationalists in the United States. Trump has emboldened Republicans to open about who they are, and the more the public sees the more they dislike it. Ring of Fire’s Farron Cousins discusses this.

Republican representative Paul Gosar from the state of Arizona, decided to completely drop the veil, or I guess you would say drop the hooded mask and let everybody know that he’s okay tweeting racist slogans to America. Earlier this week, Gosar tweeted out an image of a man in a car, and he’s got a prostitute looking through the window, and she says $50 anything you want. And then the, uh, the man says, tell everyone America first is inevitable and Gosar tweeted out that image with the hashtag America first. Well, it turns out America first is actually the slogan, the motto of white nationalists here in the United States and Gosar does know this because he recently spoke at event, at an event that was organized by an alleged white nationalist. The, the person in question has denied that they hold any racist or white nationalists tendencies whatsoever, but he has been identified by news outlets as a white nationalist.

Again, he, he says, he’s not, they say he is. So who knows where the truth actually is on that. But nonetheless, that’s almost irrelevant at this point because Gosar knows that America first is in fact a white nationalist slogan. But I also have to point out a little bit of irony here too. Obviously the little image he tweeted out with the, the prostitute saying 50 bucks, I’ll do whatever you want and the man, all he wants is for her to tell people America first is inevitable, implying that the only way Gosar and people like him can get people to listen to their idiotic talking points is to have to pay people to repeat them. So not exactly a smart message, Gosar, certainly not. But what we’re seeing right now is the Republican party, as I mentioned, taking off the hoods, dropping the masks and telling people, this is who we are.

We are comfortable enough now with where the Republican party has moved to show what we truly are. These disgusting little creatures who believe that white people are somehow better than others. America first of course means protecting the white identity in America, which isn’t even actually a thing. It means getting rid of the immigrants, preventing them from coming over here to the United States and just having this white majority that, that keeps power here in the United States. It’s a disgusting, disgusting slogan and Gosar understands exactly what it means. He has been friends with these individuals. He has spoken at their events. He has talked at their rallies. He knows that slogan means, and this was not an accident. And he feels comfortable enough in today’s GOP to say it out loud and that should tell you everything you need to know about where today’s Republican party stands.