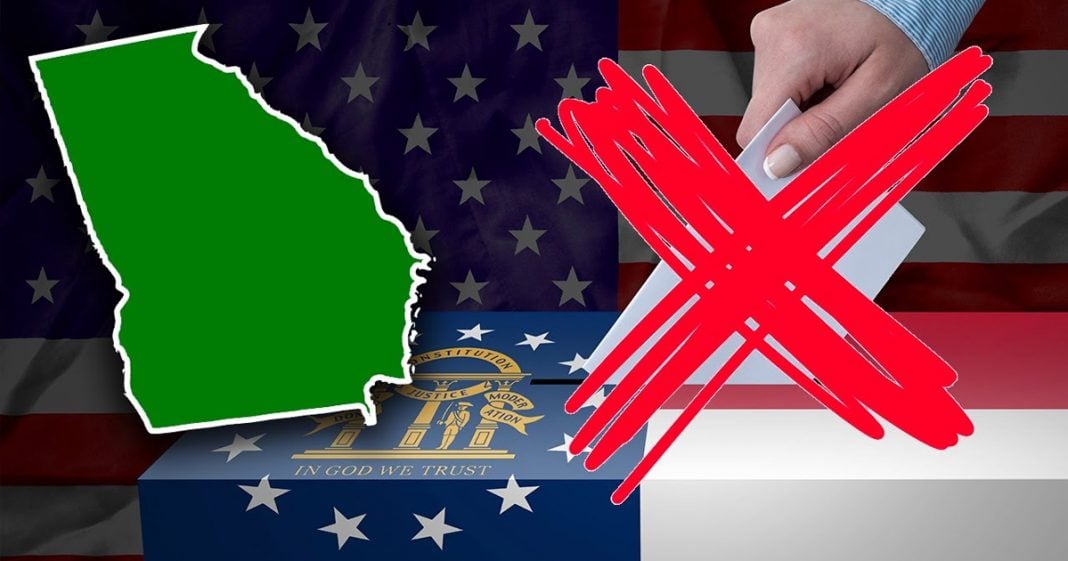 Republicans can only win by cheating. They’ve basically admitted that much in recent years. And the actions that they are taking in Georgia is just further proof that the Party of no ideas can’t survive if they don’t suppress the vote. Using Donald Trump’s bogus claims of fraud as a cover, Republicans in Georgia have now passed restrictive new voting laws that will severely limit the eligibility for absentee voting, and that’s just the beginning. Ring of Fire’s Farron Cousins explains the measure.

The Republicans who control the state of Georgia have enacted one of the most sweeping and damaging voter suppression efforts that this country has seen so far this year. With this new bill that has been passed in the state of Georgia, they are eliminating no excuse absentee voting, which for the record is actually something that Republicans in Georgia passed in 2005. They thought this would be a great idea back then, hey, let’s get more people voting. Let’s say that they can vote without having an excuse to absentee vote. And now suddenly after they realized, oh wait, that means more people vote, which means we lose. You had 1.3 million vote absentee in Georgia in the general, 1.1 million vote absentee in the January Senate runoff. So Republicans started panicking and this new piece of legislation does do away with the no excuse absentee voting.

It also criminalizes, makes it a misdemeanor to hand out food or water to people standing in long voting lines, which of course disproportionately affects communities of color in the state of Georgia and that is what this whole piece of legislation is all about. Yes, it’s about hurting the Democrats, but hurting the Democrats by suppressing people of color in Georgia, they don’t want them to vote because they typically aren’t voting for these corrupt Republicans and Georgia sees the writing on the wall. Hell, technically right now they’re a blue state, they got two Democratic senators. I didn’t think they’d, I don’t think they think they’d ever hit this point again, but they did. The demographics in the state have shifted and of course, thanks to the efforts of organizers like Stacey Abrams, Democrats have a shot of really transforming the state of Georgia for the better and Republicans are terrified of that because in order to make the state better, you have to purge the corrupt Republicans from the state and they are doing everything in their power to make sure that that can’t happen.

And they’re doing it by taking away the voice of the people. This piece of legislation, by the way, is just the beginning, 253 pieces of legislation across 43 States right now to suppress the vote, to prevent people from voting. And the absentee ballots that were cast widely in the 2020 election, thanks mostly to the pandemic and people not wanting to go be exposed to all these individuals at their precincts, that’s under attack. We got in 2020, one of the largest percentage of American citizens to actually vote and it’s because of that absentee voting and Georgia says, we’re getting rid of it. You have to have a valid excuse as to why you can’t get up off your butt and head on down to the precinct and no, by the way, not having reliable transportation doesn’t cut it. You know, living too far away from a precinct, doesn’t cut it.

It terrifies me to think what kind of excuses they will accept and I guarantee you over the next year and a half to two years, we’re going to have to be doing stories about some kind of person in Georgia, physically incapable of leaving their house that was denied the right to an absentee ballot, guarantee you that’ll happen, mark my words. Those are the kinds of stories we’ll have to cover because these Republicans who control the state of Georgia are desperate to retain their power as they watch their state changing around them. And since they don’t want to change with it, the best thing they think they can do is prevent people from voting.