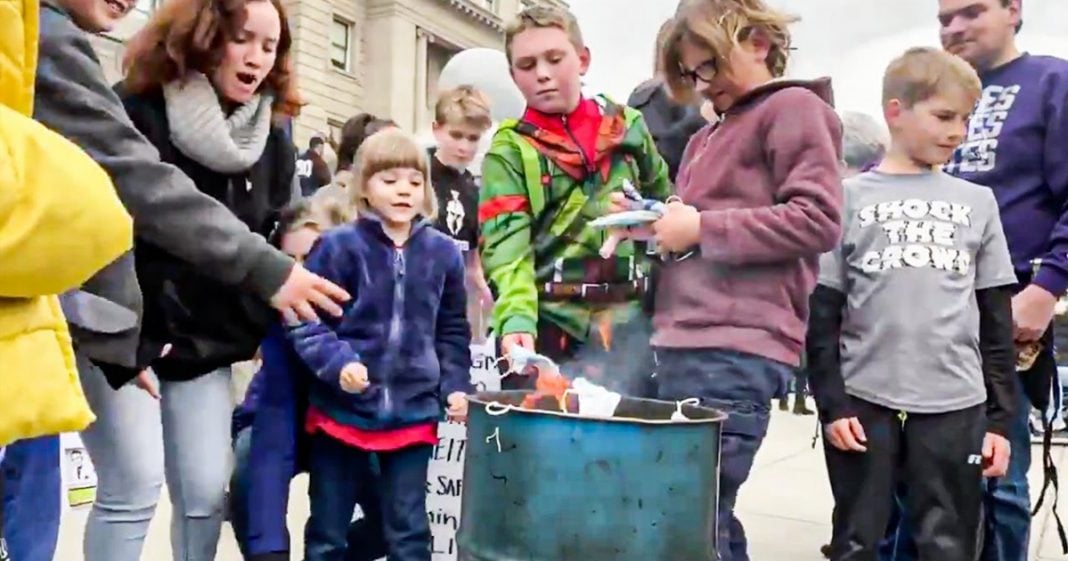 Anti-maskers in Idaho spent their Saturday at the state’s capital burning face masks, but the real disgusting part is that they had their children participate. A viral video showed children throwing masks into a burning drum, with their parents gleefully cheering them on. This kind of indoctrination should be considered a form of abuse, as these children aren’t old enough to know that their parents are morons. Ring of Fire’s Farron Cousins discusses this.

This past Saturday in Idaho, actually on the steps of the Idaho Capitol building, there was a mask burning and it wasn’t just grown adults being tired of wearing a little piece of cloth over their faces. They actually had their kids burning masks in a big oil drum on the steps of the Capitol. The video went viral, but if you haven’t seen it or even if you have and want to be outraged again, here’s the clip. My immediate gut reaction upon seeing this is how is this not considered abuse to these children? Think about it this way. These kids gleefully throwing these masks into this big fire, because let’s be honest kids, you know, it’s fire. It’s kind of cool. It’s fun. You get to play with it. But they don’t understand what they’re actually doing. They don’t understand what this symbolizes. They don’t understand probably most of them that they’re now, in, in a viral video, being absolute idiots egged on by their idiot parents. And I do not blame these kids at all for this, by the way, I do not blame those kids because this is not their fault. They are being indoctrinated by their parents to think that science is bad because that’s at the heart of all of this folks.

We know masks work. Science tells us masks work. Are they foolproof? Absolutely not. Are they 100% effective? Nope. But do they help slow the spread? Yup. Do they reduce a viral load that you may come in contact with? Yup. But the parents of these children are making a choice to teach their children that they, and I’m assuming none of the parents in that crowd were actual scientists, but they’re teaching their kids, listen to me and not the experts. Those are lessons that those kids grow up with and they take with them and they pass on to their children. Some may not, some may break out of that bubble and they may come to realize the mistakes that their parents had made. Some of them will not, and they will pass that on and that’s sad, but it’s more terrifying actually than sad. They don’t know any better right now and as long as they continue to listen to their idiotic parents, they may not ever know better.